Skip to Content
Home Asia India Being Fat in India

“You’re fat.”
I stood there, completely bewildered, thinking I must have misheard him.
“What?”
“You are fat,” he repeated, matter-of-factly. His words hung in the air between us and all I could managed to say to defend myself was,
“Excuse me?”
“Fat. F-A-T.”

Last night, my friend, Ashveer, arrived at my house, bringing whiskey, beers, and an unexpected guest, an Indian man around the age of 36. I welcomed him happily, always loving to meet new people. After a few hours, we decided to climb a rusted and rickety ladder to the roof of my house where the three of us stood on top of the city, next to my gurgling water tanks, and stared at the full yellow moon. The air was crisp, the sky was deep blue-black, and Venus was out to say goodnight as well.

The moment finished. We decided to go inside, our whiskey waited patiently for us. Ashveer climbed down the small ladder, then the larger ladder, and set himself comfortably inside while the guest and I began our descent. I slowly climbed down the first of two ladders. As he watched me climbing he said, ever-so-casually,

“You’re fat.”
I stood there, completely bewildered, thinking I must have misheard him.
“What?”
“You are fat,” He repeated, matter-of-factly. His words hung in the air between us and all I could managed to say to defend myself was,
“Excuse me?”
“Fat. F-A-T.”
I didn’t say anything; the darkness hid my expression, a hybrid of utter outrage and downright shock.
“You have a tummy,” he continued, “You should work on that.”

“You should go,” I said harshly. I noticed the shift in his body language at my response.
“What?” His turn to be shocked.
“I want you to leave. I want you to go home.” I repeated, refusing to hide my anger.
“I wasn’t talking to you,” he scrambled. “I was talking about….that….thing…over there.”
His frantic discomfort gave me some semblance of joy. I was happy he felt as bad as I felt.
“You were talking to me. And now it’s time for you to go.”
He didn’t move so I motioned to the second ladder. “GO!”
He didn’t budge so I said, “fine,” coldly, and climbed down myself. He asked if I could hold the ladder for him. I did. When he was half way down I walked into my house, into my bedroom, and locked the door without acknowledging his existence. Ashveer, not even sure what had happened, asked the man to leave while I sobbed in my bedroom.

I’m not particularly proud of how I have handled being called fat in India in the last few months. I’d like to say I just brush it off and keep going about my merry way. But I don’t. Every time it destroys me. I’m in some sort of confident and self-deprecating limbo right now. It took me a long time to become a confident person. Not just about my body, but about me as a entire being. I was furiously shy in high school, fearing criticism and never really knowing what to say to new people. I hated my body. I skipped meals and would spend hours pinching at my “fat.” But I wasn’t fat in high school. Not in the least bit. I didn’t even gain any weight from the age of 18 until my 21st birthday. But I was obsessed with my weight beginning at the age of 13.

I became very confident in college. By the time I was 22 and living in Prague, I felt great about myself. I loved my body, despite being the “heaviest” I had ever been (which still wasn’t heavy or in anyway unhealthy). I became very open, very social, made friends easily, backpacked around Europe by myself for months, picking up friends city by city. I worked hard at this confidence, it took years to develop, and therefore it is something I am very proud of. I also had no idea it was something that could crack as easily as it did when I moved to India.

Having traveled to over 50 countries, including a vast section of the Middle East, a bit of Asia, most of Europe, I really wasn’t very worried about moving to India. I’ve gone without electricity. With shameless heat. With sexual harassment. Without knowing the language. Sleeping on couches, in tents, beaches. With cockroaches. With mosquitos. Bring it on. But I really never thought about having to deal with being fat. Because when I arrived in India, I recognized I had gained some weight in the last 3-5 years, but I didn’t think I qualified as fat. 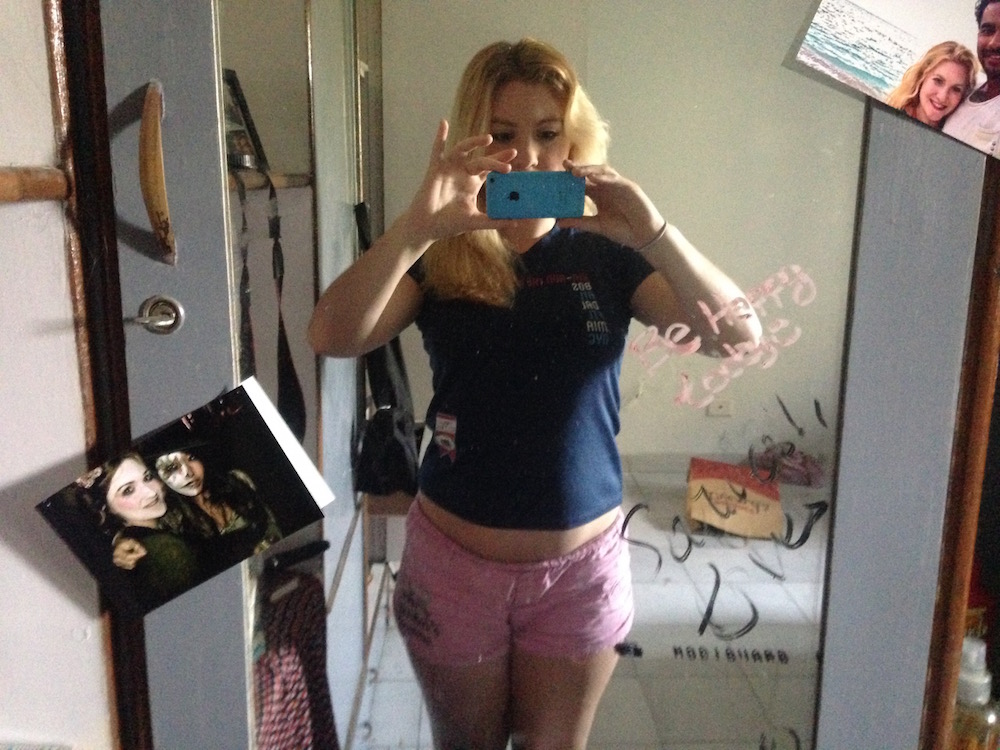 Oh, but how wrong I was…

People in India love to tell me that  I am fat. No, not people. Men. Older men. No woman in India has ever criticized the way I look (to my face, at least).

These seem small when I write them, trivial. I know it probably sounds like I am overreacting. And I think deep down, I know that. I know that the way I look is a small part of who I actually am as a person. I have a lot to offer. But I want to be completely honest and India has still been incredibly problematic for my mental health. As I said before, my confidence feels cracked. And the battle for my brain begins:

Sometimes I revert to my 15-year-old self. I can’t watch movies or TV without comparing my body to literally every actress. I refuse to wear most of my clothes because I worry I look fat in them. I wonder if I always looked fat in them or if I actually am just fatter now. I feel guilty after I eat just about anything. I cry. A lot. I beat myself up for hours when I skip the gym. I tell myself that this isn’t cultural and I’m not allowed to get upset about these comments because I should work harder, eat less, go to the gym everyday for an hour and a half instead of just two or three times a week. Even writing this blog post I have decided is me giving an excuse to the reality: I’m fat. Period.

Sometimes, then, I think that I’m being stupid. I look great. No one has a perfect body and if I lose 2 or 5 or 10 or 15 pounds, this type of obsession with body image means you will never be happy. So you are fat in India? You aren’t fat in the US. No one before India has EVER told you that you are fat (to your face). Plus, “fat” doesn’t even matter. You are healthy. You ran a half marathon. You climbed a mountain to 3200 meters a few months ago. You exercise. You shouldn’t start working out more just because some ugly old man told you to lose an extra 5 pounds. Feminists don’t roll over and give in to unnatural standards of beauty just because a few men think they should.

These “times” fluctuate from day to day or as frequently as from minute to minute. Writing this blog post has been an emotional nightmare.

I’ve had a lot of explanations as to what these comments mean in the Indian context. My Indian friends have described this mostly as a difference in how Indians and Americans perceive personal space. One text I received about the most recent incident said, “The idea of personal space is non-existent in India. People don’t realize what can be commented on and what is a no comment zone. So when they say such things to you they are being naive, not condescending…..For them it is a casual talk/remark.” Another friend said something similar. “These things are not malicious. People are just commenting. Today you look tall, today you look short. You look fatter, you look thinner. Your skin looks lighter, your skin looks darker. There is not much behind these comments. They are just comments.”

And I understand this. And I know that none of these comments have been nearly as cruel as I am interpreting them. I know calling someone “fat” in India is not the same as in the US. But it doesn’t change years of baggage I am carrying with me. It doesn’t change that I am going to read into it because I spent 24 years believing that commenting on someone’s appearance negatively is one of the rudest things you can do. It doesn’t change that no one in India has ever told me they think I am intelligent, with the exception of one person. I don’t need people to tell me these things to know them. But I sometimes feel like the reason it is just men making these comments is because that’s all I they think that I am good for, my looks. And I need to “work on my tummy” in order to be the best I can be for these men. Because learning to play the guitar or learning to speak Hindi in the time I’m not going to the gym isn’t as important as having a flat stomach.

Sometimes, when I tell people these incidents, they tell me stories about their fat friends getting the same type of treatment in India. And then I feel even worse, because suddenly they are comparing me with their fat friends. It’s like a conformation that I actually am fat.

One of my colleagues said people in India have unrealistic expectations and that there is only one perfect body type here. She says they don’t realize people can be of different shapes and sizes even though they are fine, they aren’t fat, they are still healthy. But 15-year-old body-conscious Gwen blocked any logic tangible in this argument and all I could think was, “but I want the perfect body.”

This post is not intended to suggest every Indian feels this way. This is a small sample based solely on my experience living in India. It’s not an invitation for anyone to tell me to “get over” my own body-image problems. I already know I need to do this. Like I said, I believed that I had. It’s also not a public way to fish for compliments. I have posted pictures of myself only to, hopefully, give perspective as to what body type can be considered “less than perfect” to some people here in India. I tried to post honest pictures, not pictures where I look fatter or thinner than normal.

I simply want to draw attention to a struggle that I have that I sincerely believe I would not be having in the US. I sincerely don’t think anyone in the US would give a second thought to my size. I want to draw attention to the fact that societies have very different perceptions as to what is private, what is off-limits, what is acceptable, and how that affects people who don’t necessarily have the same cultural rules and understandings.

So after the night ended and I took a shower, I stared at my naked body for awhile and felt no shame. “Should I be ashamed of looking like this?” The rational, confident person that I have worked for be since high school screamed, “No!” Of course not. And patted myself on the back and gave a big middle finger to Ashveer’s guest. You look great. But, once again, those thoughts of skipping lunch in the 8th grade and researching fad diets slithered out of the dark corners of my memory and wrapped about my logic to cut off its life before any more positive thoughts could be created.

And now I’m off to visit the gym and to ask my trainer for diet plans.