My grandfather died a year ago today. In many ways, I think his death was the most difficult for me of all my grandparents. Not …

Christmas Past This is my third consecutive Christmas outside of the United States, and my fourth ever. The first Christmas abroad I spent in Prague, …

I had my first official Spanish class April 19th. Before I arrived in Buenos Aires, I could say: “no hablo español,” “baño,” “vino,” and, “pollo.” …

I took the U.S. Department of State Foreign Service Officer Test (FSOT) October 7th. Due to my move from Colombia to Argentina only two weeks …

One of my favorite Leonardo DiCaprio movies is The Beach. If you haven’t seen it, it’s about a backpacker in Thailand who discovers a secret …

First of all, I’m really shocked and excited about how many people voted to tell me where I should move. Thanks guys! I feel like …

I moved to Argentina a month and a half ago and haven’t been very good at updating my blog. Most of this is due to the fact that my online business is going incredibly well. Who knew remote freelance writing and editing could be so lucrative? Being able to create my own hours and rates provides me with the independence I need, but it also motivates me to the point that I’ve tucked away some of my other goals. I’ve barely done any personal writing, nor have I studied for any of the exams I’m planning to take in a few months.

But life in Argentina is easy. I have a co-working space called Urban Station where I spend the majority of my time. This is mostly due to unlimited free coffee and croissants. I also have a gym in order to balance out my croissant addiction.

I have Spanish lessons 6 hours/week with a private teacher. Spanish grammar is incredibly easy compared to Arabic or Hindi. The language is so much like French that its not much of a struggle to read. However, with any language, its taking time to commit everything to memory and to get used to speaking and listening to the accent. Especially since Argentinian is different than other Spanish. The double ‘L’ seen in pollo and calle is pronouned “sh” instead of “y” which confuses me sometimes.

I moved into my apartment a month ago which I share a love-hate relationship with. It’s a pretty cool place, located in a courtyard in one of the more “happening” areas of Buenos Aires. I have my own loft, with a bedroom upstairs, and couch, table, and tiny kitchen downstairs. I share the courtyard with 3 Guatemalans, 2 French people, 2 Brazilians and there is an upstairs unit which is, ironically, housing a friend of mine from college that I met here by coincidence.

I like the apartment and all the people, but the issue arises in the fact that most are university students and it’s a bit of a party house. The walls are paper thin so this means if I have to wake up early for work, or want a quiet night at home to be an abuela— no such luck. My earplugs are only so good.

Actually, the level of partying is downright impressive. Two weekends ago my neighbor started the party at 1am. I left for the gym the next morning around 10am and he was still belting Mulan songs in Spanish.

I returned around 2pm to change and the music and alcohol were still flowing freely. At 6pm he came over and invited me to a bar. He finally passed out at 1am the next night.

This morning I woke up around 10am to someone sobbing in the courtyard.

Aside from the crying, it’s a fun place when I want to party. Everyone is very friendly and I love meeting new people. But it is taking its toll on my energy levels. So I’ve decided I will move for sure. The apartment upstairs becomes available June 1st so I’m planning to take that. 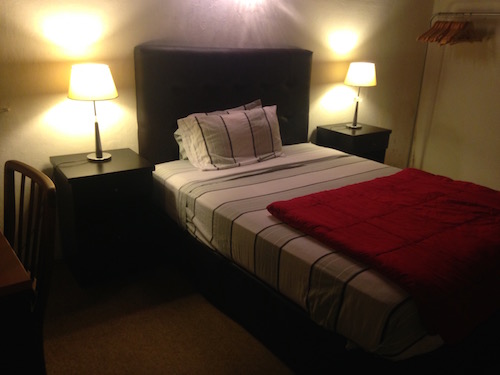 That is, if I decided to stay in Argentina. It’s getting cold here and I’m starting to rethink my decision. I’ve met some really cool people here, but I don’t feel emotionally attached the the city like I did Chandigarh or Beirut or Budapest. I still have five months left on my Indian visa and I’m tempted to try living in Mumbai for a few months and return to Argentina in October once it is warmer. Or, I’ve considered going somewhere else in South America with better weather until the winter passes. Maybe Brazil or Colombia.

What do you guys think? I’ve attached a poll for your thoughts

I set up an online business so I can enjoy the benefits of working remotely— like living in Argentina!