The time has finally come to say goodbye to my single favorite item: my passport. My old one is officially expired.

It’s a bit strange having a new one (although, I do like my photo better). My old passport has so many stamps, scratches, and stories. I love it when I take it out and people gasp at its degradation or when immigration officers become overwhelmed trying to sort through the stamps in the back. One of my coworkers at Due West liked to look at it for “inspiration.” I once told someone it looked like it had gone through a warzone and he commented, “It probably has!”

For the last few years, I’ve felt a bit of my identity is wrapped up in it; there are so many memories represented by various visas, or the extra pages I got added back in 2014, or the random stickers which have been stuck on and ripped off by more government agencies than I can count.

And so, I decided to dedicate a post to my passport…. I can’t write the stories represented by every frayed page, fuzzy stamp, or “warning sticker,” but I’ll talk a little about the mental transitions I’ve made since having it. 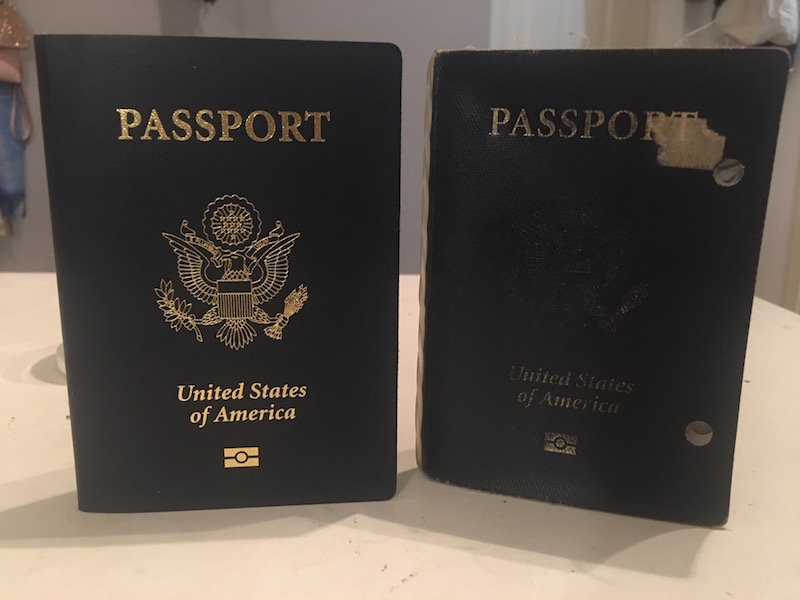 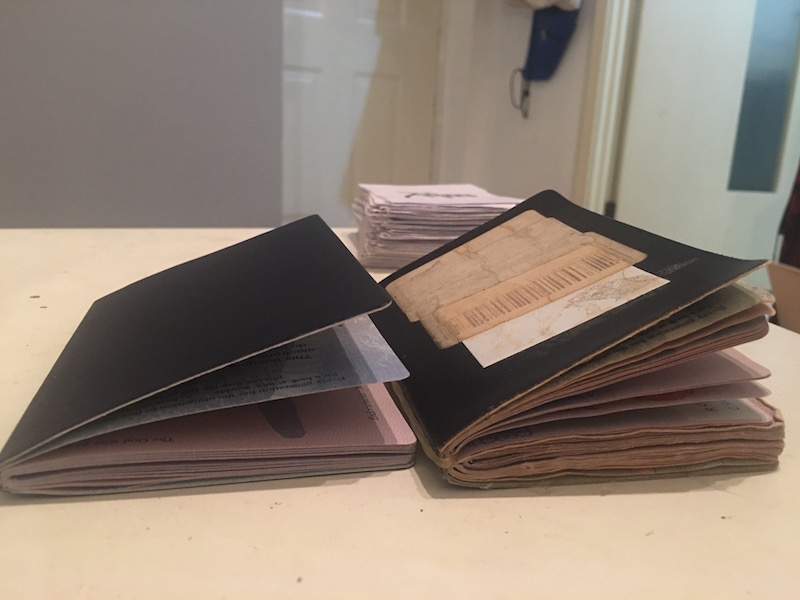 I got my passport in January of 2010 when I was just 19 years old. This wasn’t my first passport (I got my first at age 10 and my second at age 15*), but it was with this passport that my perception of the world unfurled into something that was both an at-once epiphany and a deep ten-year exploration.

Later in 2010, I got my student visa to Hungary. As much as I hate to be a stereotype, my semester abroad in college really was “life-changing.” Not because I tried some new food, learned a few phrases in Hungarian, and ended up going back to the U.S. with some good memories (nothing wrong with that; I just don’t think it fits the definition of “life-changing”) but because had I NOT gone to Budapest, I’m fairly confident my life trajectory would have looked quite different.

By my junior year of college, I was still quite shy and studious. At 20, I truly believed I would get a Ph.D. in history, marry my college boyfriend, and live in a major U.S. city throughout my twenties.

Of course, NONE of that happened. Instead of grad school after college, I worked in Italy for a summer, backpacked around Europe by myself (something unthinkable to me at 19), and worked in Prague for a year before backpacking (some more) around Eastern Europe and the Caucuses. 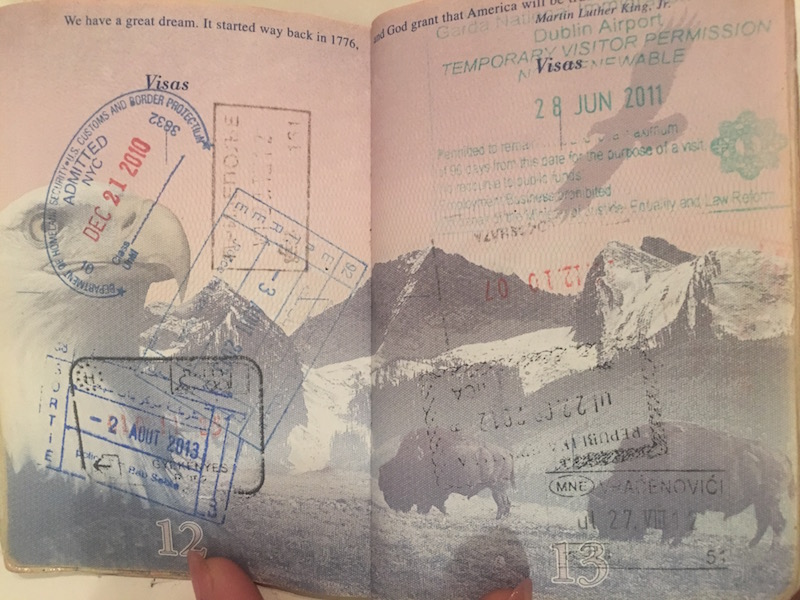 My plan had been to get all my curiosity and traveling “out of my system” so I could go to graduate school and fulfill my plan of being an academic and a normal adult human being.

Again: Plan aborted. Graduate school shifted my attention away from Europe and towards the Middle East. I learned Arabic, learned some political and cultural history of the Middle East, and most importantly, learned I had no interest in being an academic. I realized what I truly loved was the learning that came with being academic (and none of the staying still at a university begging for grant money).

I went to Lebanon for 2 months to study Arabic intensively, backpacked (a trend emerges) around the region by myself (to my parents’ horror) and realized that if I could take on this region solo, the world was mine. All I needed was a little money, lots of cultural awareness and research skills, and my passport.

I actually ran out of pages in my passport in Jordan and had to get new ones added at the U.S. embassy in Amman. There’s a funny story in there about going through security which I’ll save for another time. I tried to just get a single 20-page book added but got talked into adding TWO 20-page books because it was the same price. The woman said she was worried I was going to fill up my passport in the 6 years I had left on it. 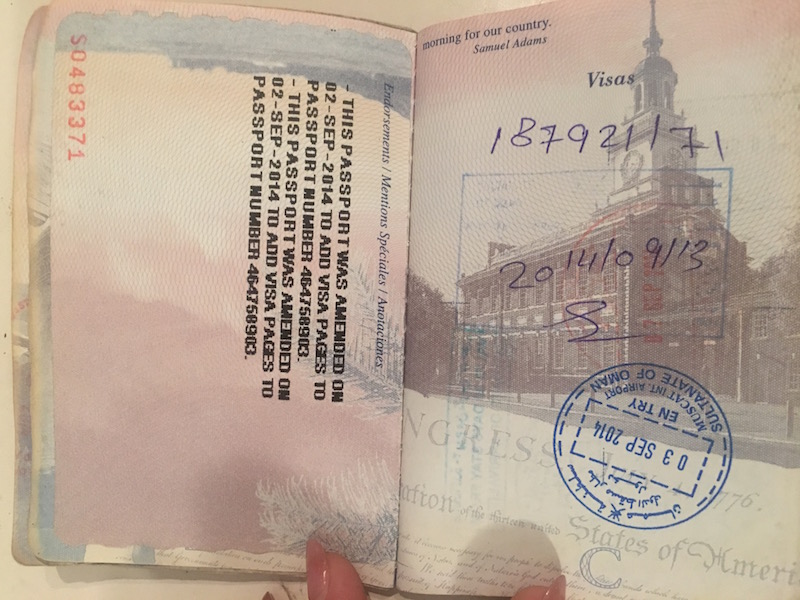 So that’s how I got some paged literally scotch-taped into my passport (you’d think the U.S. government would have a more complex system but no, they just tape those suckers in….). Because I got double books, my passport became much too large for it’s spine.

Fast-forward through the time I flew from Australia to D.C. with bronchitis just to find out I didn’t have the paperwork for my Indian work permit, the hours I spent in Indian government buildings trying to sort out the mess of visa “stuff” we had to deal with, the ferry rides I took between Buenos Aires and Uruguay to get my visa revamped, panicking as I boarded my plane to Vietnam that I didn’t have the correct visa paperwork, and my many stops to the Chinese Police station, passport in hand….

The pages just kept filling up. Some of these stamps I got on trains or planes or buses. I can’t say I remember getting each individual stamp, but for many, I do. I remember the people I was with, getting off in an unexpected country due to flight delays, the people I met in various cities, the people I left behind at various airports…

It’s a little bit ironic that my passport came to its conclusion in a country in which I never intended to be (and definitely in which I never intended to stay). However, I think that’s a fitting metaphor for my life and for the passport itself. The “travel thing” I kept hoping to shake ended up being my life. And my passport has been the most filling sustenance for my curiosity and the greatest tool for understanding what my goals are.

Here’s to ten more years of wandering, exploring and stamping…

*U.S. passports for minors under 18 are only valid for 5 years; for adults they are valid for 10.

Previous: China 2.0: A New Chapter in Beijing
Next: 7 Things That Catch Me Off-guard When I Visit the U.S.