One week ago I collapsed in my bed at the hostel in Cafayate, exhausted and in some sort of dreamlike state, half asleep and half high on endorphins. I had just ridden a bike up and down through the mountains along a secluded highway, dodging occasional tour buses and hoping the wind didn’t blow me into the valley. At one point my brakes went out. I got sunburned. And I did the majority of the ride alone.

After five long, hot hours in the sun, I was bruised, exhausted, and reflecting on one of the best travel experiences I’ve had since my trek to Everest Base Camp.

My time in Argentina is coming to a close. Buenos Aires, to be honest, is just too expensive for a freelance writer and teacher. I can live here and travel a bit, but based on the amount I am making monthly, it just doesn’t make sense to stay here when I can live for half the price in Medellin, Colombia. But more on that later…..

My Argentinian friends have been talking about the north for months. Originally, I planned to go with Gian in early September but instead, I stayed in Colombia an extra month. So when Damian (who quit his job to go travel the world) suggested it, I jumped on the idea.

I spent three days in the town of Cafayate, a pueblo of only about 12,000 people. It’s a cute town of low buildings and staggering mountain views, dotted with artisanal vineyards and Spanish-style architecture. 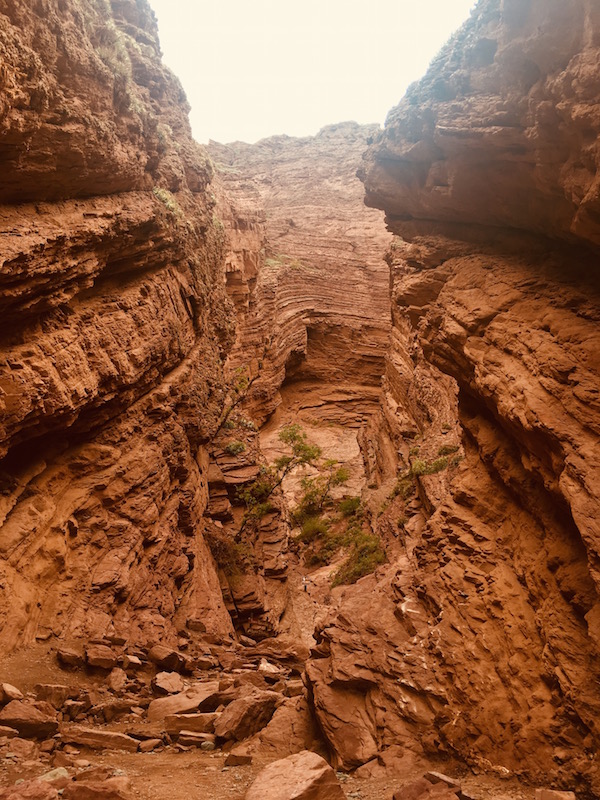 The bike ride was Damian’s idea. Quebrada de las Conchas (Broken Shells)  is an ancient rock formation about 30 miles (50 kilometers) from Cafayate. Most people take the bus or organize a van tour. We took the 8:30 a.m. bus the 45 minutes through breathtaking scenery out of to the rock. 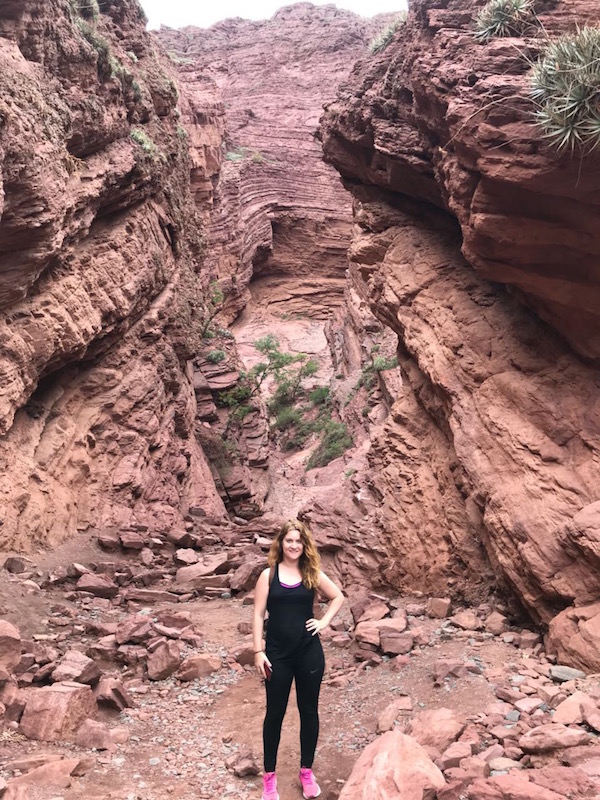 We were the only people when we first arrived and decided to climb up as high as we could into the formation. 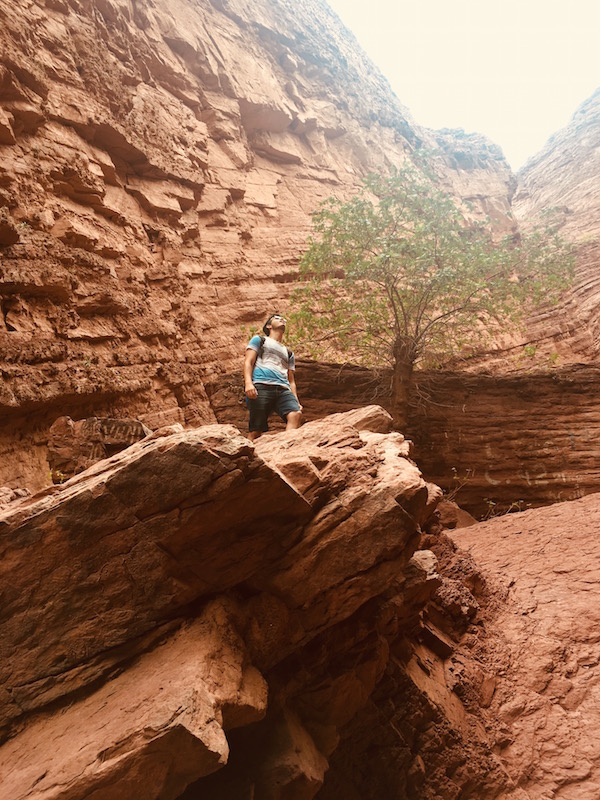 After an hour or so at the rock formation, everyone else headed back to Cafayate by bus and Damian and I got our bikes. 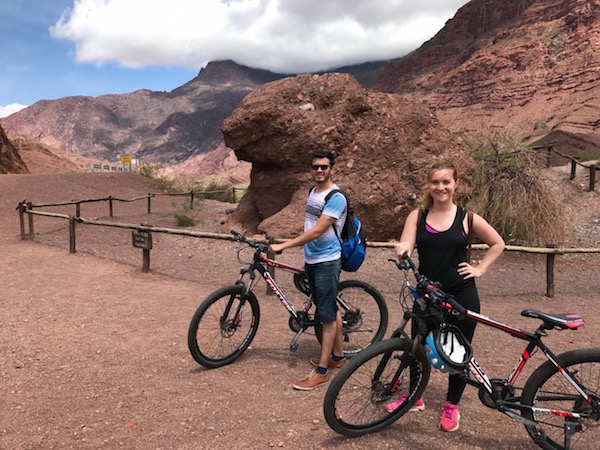 I was far more freaked out about the ride than Damian. I hadn’t ridden a bike in years and mine was far too big, meaning to stop I had to skillfully leap off of it as it was too high for my feet to touch the ground. There was barely any space for bikes on the road, which meant riding directly on the white line. The road was narrow with sharp turns. Cars went fast. 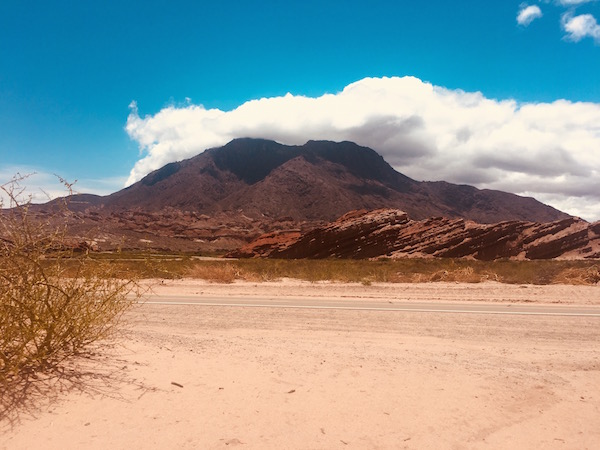 We started off together around 11 a.m. Within an hour, I was having the time of my life. Sure the views had been breathtaking from the bus, but outside, riding on the deserted streets, I felt like I was speeding into a painting. Honestly, the pictures don’t do it justice. I had to fight the urge to stop at every curve to take another photo. The desert is long and expansive. Some rocks looked bright pink and purple. Others appeared to be melting. It was a mix of Wadi Rum in Jordan and the Grand Canyon. If you’ve been to either, you’ll understand the feeling of sheer insignificance meets grandeur. 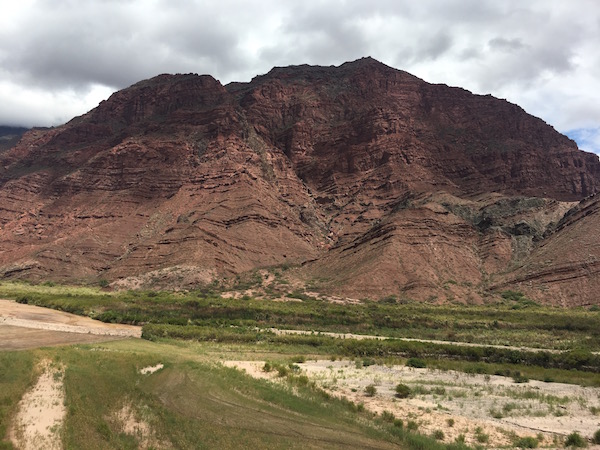 It didn’t take long to figure out Damian and I had different paces and different ideas of what made the ride fun. I enjoyed the physical challenge as much as the scenery. I wanted to go fast up the hills and faster down the mountains. I’ve been going to CrossFit 3-5 times a week since July and I’m in quite good shape. I was killing it.

For the first 25 kilometers, I rode ahead and then picked a spot to stop and wait. This worked well when my brakes went out. We decided that, since Damian was tall enough to stop his bike by putting his feet down (and since I had to jump off to stop), we should switch bikes. 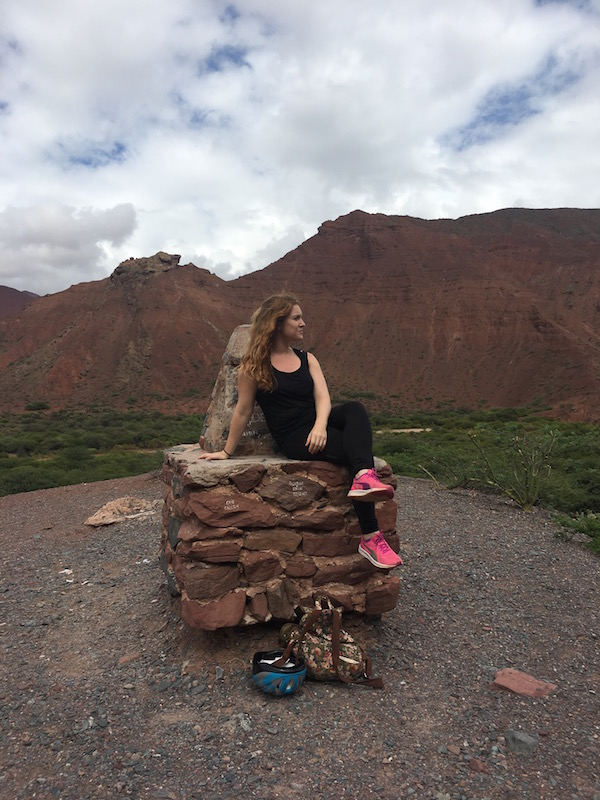 Alone in the Desert

Not long after that, he suggested I finish the ride alone. He was speeding to keep up and wasn’t enjoying himself. After being ditched on Everest I’m not one to leave someone behind, but I could tell he really would have more fun without me, so I went ahead. 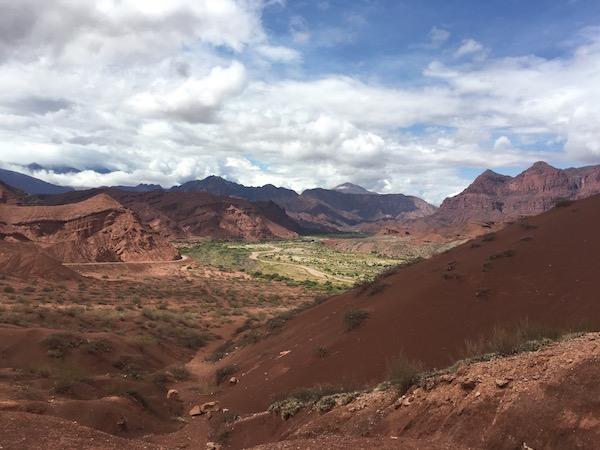 I can’t quite explain the calm I felt being alone in the vastness of the desert. Around kilometer 17 (after completing 30 kilometers/18.6 miles), I stopped for some water at a hut by the side of the road. I had passed a park entrance a minute before that caught my curiosity. I figured I would “wait” for Damian to catch up by looking inside and hid my bike behind some rocks.

I planned to only be 20 minutes, but I must have been in the “park” for over an hour. It looked like something from a different planet, or from the Jurassic area. The mountains were barren and the space empty and every expanding. The best part: the silence. I was alone. I walked and walked and walked. I found some caves. I nearly got blown off a mountain by the force of the wind. And I took some timelapse videos for your viewing pleasure.

While I was playing in the desert, Damian biked by me without either of us realizing. I actually ended up catching up to him around kilometer 9 once things flattened out a bit. Around kilometer 5, I turned around to congratulate him on us almost being finished and realized I had passed him again. I waited for about 20 minutes by a vineyard but ultimately decided to return to the hostel for a shower.

As my time in Argentina concludes, I can’t think of a better way to leave the country than with the afternoon in the desert, flying through the mountains alone on the bicycle. By the time I got to the hostel, I had bruises all over my inner thighs and butt from the seat, my back was bright red, and my body exhausted.

But not once did I feel unhappy during those five hours. It was the calmest I’ve felt in months.

Here’s to finding inspiration in solitude! 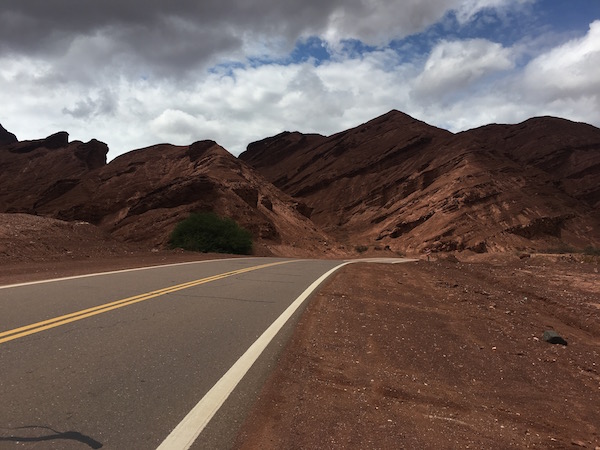