Skip to Content
Home Europe Croatia Why Not Send you Ex’s Crap to the Museum of Broken Relationships?

A few months ago I told someone I’ve had a different boyfriend every year since I was 20. They looked sort of disgusted. Fair. But I move around a lot. I’ve had a lot of relationships blossom and whither. It’s part of being a bit of a vagabond in your twenties, I suppose. I could get sentimental and say I have hoards of wonderful memories, a few regrets, and years of “romantic life lessons,” but more than any of that— I just plain have a lot of stuff. Seriously. Boxes filled to the rim of old boyfriends. A plethora of shit.

My corsage from junior year which I pressed; jewelry from birthdays; a shirt that accidentally got into my suitcase the last time I saw him and since he loved it so much I feel bad throwing it out.

One of my ex’s moved cities and literally left me all of his stuff— utensils, plates, cups, a toaster, a vacuum, expensive speakers, etc… Getting a bunch of free stuff seemed like a good idea at the time until I realized every time I vacuumed I had to think of him. Trying to innocently eat toast and staring at the metal kitchen appliance romanticizing over the time he made me breakfast is just downright frustrating. So I put it all in a box in my apartment lobby with a sign that said “Free Stuff” and it was gone in an hour.

A case of expensive darts; a broken traffic barricade,  a stuffed animal that his dead best friend gave him in childhood and that I still feel totally guilty owning.

I could literally build a museum with all these memories trickily disguised as flower vases and earrings. So in 2012, I was really excited to realize someone had actually already done this.

In 2012, I found myself unexpectedly wandering around Zagreb. From the center, I followed a path of little hearts laid out on the streets up a hill to a small museum. I returned to Zagreb last week, four years later.

Inside this incredibly innovative and creative museum, sentimental objects are paired with written stories documenting relationships and their ruins. The stories share how the object represents the unsuccessful liaison. Mostly they are romantic shortcomings, but others include strained relationships with family members, and even a small exhibit on refugee stories.

The items range from classic (mixed CDs and clothing items), to depressing (suicide letters), to strange (an axe used for “therapeutic purposes” to chop up the furniture of an ex-girlfriend before she returned from holiday).

The museum receives thousands of items from around the world. The stories are touching, tragic, and sometimes humorous. The idea is to help these people cope, heal, forget, and/or move on. They also remind us that letting go is part of life, as unfortunate and painful as that may be. Since they only ever display about 10% of the items they receive, the exhibit is constantly changing. 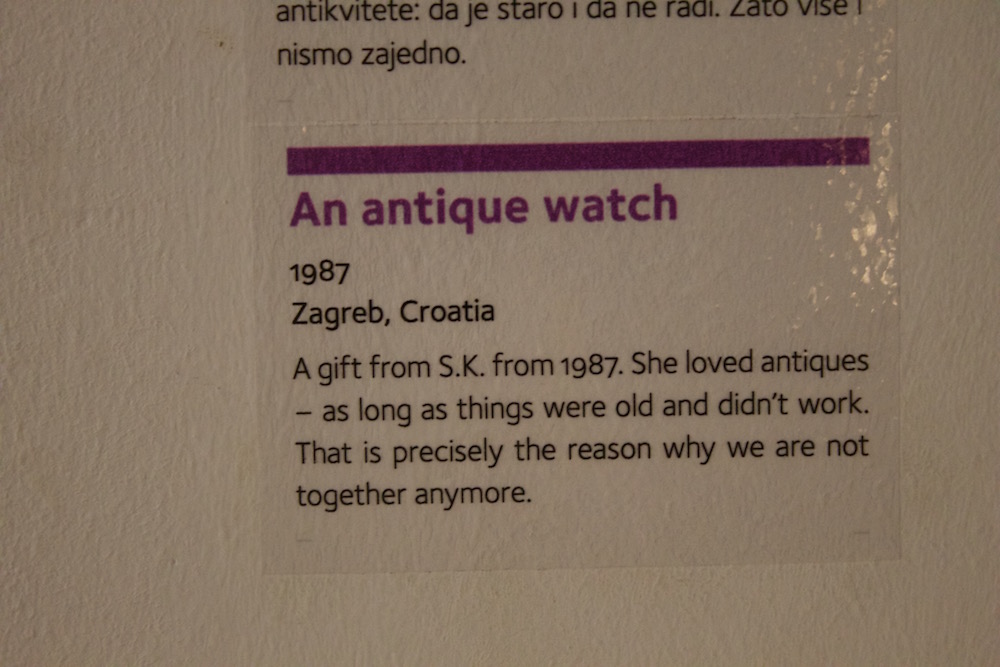 Croatian artists Olinka Vištica and Dražen Grubišić conceptualized the idea after seeing that society “oblige[s] us with our marriages, funerals, and even graduation farewells, but deny us any formal recognition of the demise of a relationship, despite its strong emotional effect.”

Having received their collection from across the world, they recognize that culture and customs may affect the items and stories displayed, yet they believe that, despite this, it is clear that there are still “universal patterns offering us to discover [the stories] and feel the comfort they can bring. Hopefully they can also inspire our personal search for deeper insights and strengthen our belief in something more meaningful than random sufferings.”

If you want to read more about the museum, you can visit the website. The Museum is opening another location in Los Angeles this summer. So if you can’t make it to the original in Zagreb, be sure to visit the one in LA if you find yourself out West. If you don’t have the time to get to any museum, the founders have published a book of photos and stories from their collection.

Does anyone else have any strange objects from broken relationships they are holding onto? Or am I the only one with a dinky light-up snow globe I can’t bring myself to throw away because of how happy it made me when I was 20?