The summer before my final year of University I decided to participate in an archaeological excavation. In fairness, it was part of UNC’s Archaeology major. Plus, how cool is that?

You’d be surprised how many field schools there are across the planet offering course credit for a summer excavating. If anyone is interested, here is a database of current excavations looking for volunteers or students worldwide. I literally chose Ireland because the semester before I took a class called The Medieval Expansion of Europe and we discussed British rhetoric of Ireland in the late Medieval period, which is how the stereotype of Ireland as mystical and full of magical creatures became perpetuated. I figured, why not try to dig up a Leprechaun or two?

Here’s a very weird and very, very vulgar short film about a leprechaun. I strongly urge anyone who dislikes anything remotely weird and vulgar to not watch it and judge me.

I’m writing this blog post at 3am IST. So forgive the inappropriate content on my otherwise tasteful blog.

Obviously, I imagined myself as Indian Jones (Gwendiana Jones), digging up ancient relics and consequently stumbling upon some sort of crazy mystical quest in which I save the day. I was only slightly disappointed to find out most of my archaeological dig consisted of labeling roof slates from the 14th and 15th century.

The month of July 2011 I worked on the site named “The Black Friary” (An Mhainistir Dhubh), a Dominican Friary located in Trim, Ireland, built in 1263. If you aren’t sure what a friary is, think of Friar Tuck from Robin Hood.

Friars give up their worldly possession and follow a simple life dedicated the God. They are similar (though slightly different) than monks.The Dominicans are one of the biggest orders.

Anyway, in 1540 King Henry VIII decided no one was going to be Catholic anymore and so all the Irish monasteries (and friaries) were abandoned or destroyed.

Four and a half centuries later, our job was to find out where the friary walls were located and to make sense of the general structure of the building. Instead we just kept  digging up skeletons. So many skeletons. We even changed where we were digging to avoid skeletons and found MORE  skeletons. 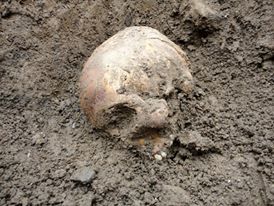 Some people found some pretty cool stuff. Like this girl Malika from Washington who found a great example of an intact skull. People were pretty excited about that.

But no one was really excited when I found a dead baby. Everyone got really sentimental and sad.

I really tried to look misty-eyed about the whole thing and I think I did a damn good job pretending to be sad. But it’s kind of hard to be sad about a baby that died in something like 1300. My guess is that a lot  of babies died in 1300 (that factoid brought to you with my fancy B.A. in History. And they said I’d never use it…) When you think about the disease and violence of the time, most babies didn’t stand a chance. Academically, I find it an interesting mental exercise to think of all the reasons the baby may have failed to reach childhood. The Plague? Exposure? Hunger?

Excavating a baby is extremely difficult, not just emotionally From what it seemed, the baby’s coffin must have slid into a vertical position at some point as I found most of the baby upright. The legs were laying horizontally. Almost the entire thing had turned to dust. Baby bones aren’t nearly as sturdy as adult bones. I couldn’t even move it into a box, it pretty much just crumbled before my eyes.

Despite not feeling particularly sad about the baby, I did take issue with the way the Irish handle human remains on digs. While the team “got sad” about the baby, skeletons of people sat idly on the top of an oven.

Actually, I’m not really sure there are  any regulations on dead bodies in Ireland. In the US, the regulations are actually quite strict. For decades, archaeologists dug of the remains of Native Americans and kept them in shoe boxes or beer cases. This is problematic since some tribes believe in ancestor worship and the burial of the individuals is very spiritually important. Totally fair. These skeletal remains have since been returned to the tribes for reburial. Although I don’t believe in ancestor worship, I do believe we should respect the dead.

It doesn’t help that the rest of the summer I was pretty certain I was being haunted. Which I wrote about here.

Does anyone else feel particularly strongly about the idea of being dug up a few centuries from now?