I’m not sure what I was expecting, but a group of men dipping a dead body in the river was not on the list. Only about 20 feet in front of me, his thin body blocked by those still inhabited by a consciousness, I caught a glimpse of a limp wrist hanging to the side.

Then there was the elderly woman being placed on a funeral pyre only a few feet away from the river, her body wrapped tightly in yellow fabric, her face visible.

Then a younger woman, too young, carried by a group of men chanting “ram naam satya hai” (the name of Ram is truth), floated by me. I regularly jumped to the side of an alley to allow a body to pass.

Then a corpse’s charred face, black from the fire.

The epitome of it all seemed to be, as the evening fell, watching the black silhouette of two meager legs fall to the ground, off their body, out of the pyre. One of the men tending to the cremating bodies used a stick to flick the two legs back into the fire. The first leg flipped up easily. The second one required a clamp to lift the second leg and place it on top, toes visible against the orange fire background.

I arrived in Varanasi a few days before Christmas. I had wanted to visit the holy city for months now, but always found a reason to put it off. I was aware people were cremated in Varanasi, their ashes scattered in the Ganges, but for whatever reason I just didn’t think I’d get so up close and personal with death. I sort of assumed the “burning ghats” would be far from the public eye, perhaps simply a fire in the distance reminding us more subtly of our approaching demise.

I’d enjoyed Varanasi my first day. I woke up at 4:30am for an early morning boat ride down the Ganges, rowed by a funny Indian man I was pretty sure was stoned on bhang lassi (bhang is a very potent variant of marijuana, usually consumed in a type of milkshake. You can read about my terrifying experience with it here). He kept giggling and talking nonsense but was having a wonderful time. We saw the early morning aarti (a Hindu religious ceremony, paying homage to the holy river and the Gods), we rowed by early morning joggers on the ghats, and pretended like we could see the sunrise through the thick white smog hovering over the city.

After some chai, I wandered around the maze of the old city. It’s one of the oldest continually inhabited settlements in the world, believed by archaeologists to have first been settled around 2000 BCE. Photographs from the 19th century show the ghats and temples built along the river in a similar fashion as they look today. I strolled along the narrow alleys, jumping out of the way for rickshaws and squeezing by cows roaming aimlessly. I was looking for the famous “blue lassi shop.” Instead, I stumbled upon raw, unadulterated death.

Walking along the water, I approached about 15 fires. What’s weird is, it’s not like I don’t know this stuff exists. It’s not like I don’t think about dying so much its slightly unhealthy thanks, in part, to some crazy events from my teenager years. Even before that, I was weirdly obsessed with graveyards as a child. I still love visiting them. And I’ve known people who have died. It’s not like this was my first wake up call with my own mortality. Honestly, the amount of morbid I am, I really should be wearing a trench coat and dye my hair black. But this was different. Actually seeing dead bodies burn up and completely cease to be really crushed me. All I could think was, ‘Here we are, living our stupid lives, worrying about paying rent, complaining about our Facebook profile pictures, and in 60 years, 40 years, 20 years, 3 weeks, we could be a pile of ash.’ Bodies decomposed. All our memories and what makes us ‘us’ gone. It just sort of sucks. And it really whacked me over the head. (Existential rambling ends here, I promise).

I went back that evening as part of a second boat ride and I’m glad I did. Someone explained more about the ritual, which I’m glad I heard. The cremation never ends. It continues at all times of the night, all days of the year. Fire is considered purification. After we live our lives here on earth, our souls need to be purified, and the fire does that. White is considered the color of mourning in Hinduism, and the eldest son (or male relative) of the deceased typically wears white and shaves his head upon the death of said family member. He then takes fire from the eternal flame (thought to have been burning for thousands of years) and uses it to light the pyre. A body takes 3-4 hours to burn and people can be seen throwing sandalwood in the fire and on the bodies, preventing any odor.

People pay thousands of rupees to be cremated on the Ganges and to have their ashes sprinkled in the water. The idea, we were told, is that this action breaks the cycle of reincarnation. These souls will not be reborn, but will reach nirvana, salvation. It’s why people spend their life fortunes on being cremated here. I told this to a more modern (sort of atheistic) ‘Hindu’ who sort of rolled their eyes, so I guess this isn’t believed by everyone. But’s what we were told. And I found it comforting to know that these people, having to watch their loved ones burn away, believed they were in a better place. 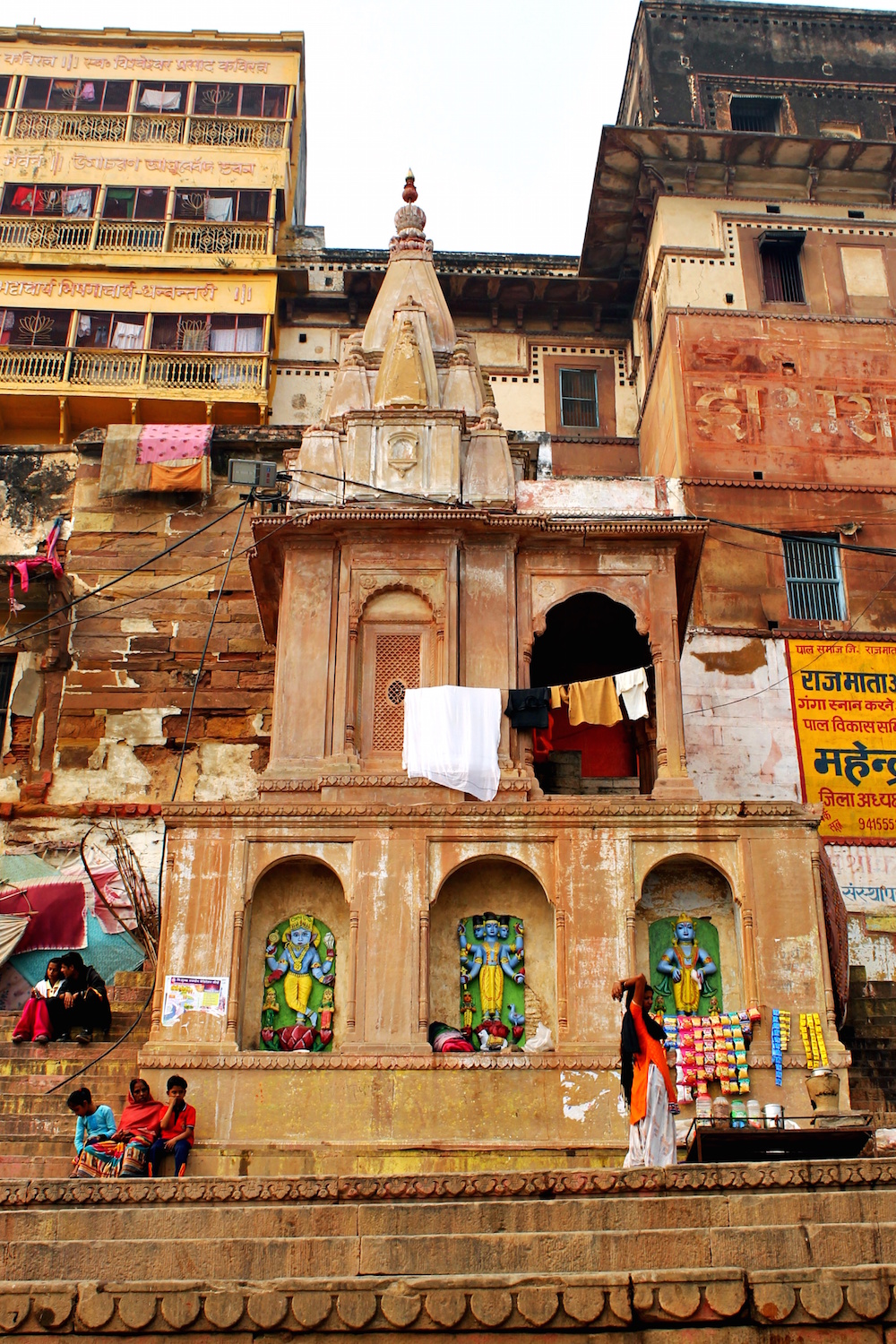 The process after the body is burned didn’t comfort me much. The people working as the cremators are all Dalit, the lowest caste of Indians, often known in the West as the ‘untouchables.’ (All I’ve learned in a year and a half in India is that the caste system sort of isn’t and sort of is still a thing. Some people still follow it despite it being banned. Others don’t even know what caste their family came from until they look it up. I could elaborate, but that’s the gist of what I understand).

In this case, it’s a thing. After the body is ash, the Dalits can be seen standing in the water, sifting through the ashes in order to collect the remnants of any gold on the body that melted down. They get to keep what they find. Cows roam around the bodies, munching on the flowered garlands that once decorated the corpses. Next to a small burning ghat, people wash bags of laundry, unfazed.

With modernization, crematoriums have been built along the river as well. So not all bodies are burnt in the open. There are also underground cremation spots. During the summer months, when the water rises, there is less space for the pyres on the river banks, so these serve as useful alternatives. NRIs (non-resident Indians living in Europe, US, etc…) even send their ashes to be scattered in the river. It’s a highly sought after resting place for thousands of people. Around 25,000 to 30,000 bodies are burned here annually (about 80 per day). That’s only about .2% of the number of people who die in India every year.

Women can be burned on the ghats, but traditionally female family members cannot attend the cremation. I’ve researched why and haven’t found one reason. We were told that it is believed that, when the soul is released, if it senses too much grieving or mourning, it may become “confused,” and stay with the mourning relative, instead of becoming free. Bringing women means, undoubtedly, they will cry and the soul might try to stay on earth. However, I also read that its simply because it will upset the women more than the men to witness the cremation they need to be shielded. Just now I asked Rohit why women can’t attend cremations and he responded, ‘they do.’ So, it depends on how conservative the family is. Female visitors (i.e. me) are fine, since they have no attachment with the souls trying to reach Nirvana.

Not all bodies are cremated. Children (ages vary according to who I talk to, though typically pre-puberty) are buried or sunk into the river with a stone. They do not need to be burned, for they are already pure. Likewise, hermaphrodites (called transgenders in India), holy men, lepers, victims of snakebites, and pregnant women are not burned. Customs vary quite a bit according to location, family, and rural v. urban divides so I in no way want to imply this is what all Indians (or all Hindus) believe. Most of my urban friends do not shave their heads upon the death of a family member, for instance. Even just a quick Google search brings up a variety of answers to who can and can’t be cremated.

Despite the initial shock of it all, I’m really glad I went. I don’t think the experience was good for my general existential crisis, but in terms of understanding other cultures, traditions, religions, etc… it may have been one of the most fascinating rituals I’ve seen. I’d recommend it, but only to those in an already mentally prepared state.