I met Happie over the summer quite accidentally. A group of Americans plopped down in the middle of my “not so foreigner filled” city (Chandigarh, for anyone not paying attention) for an intensive Punjabi language course. Most of these were college students on scholarship. They only stayed 8 weeks. At the end of their course, I hosted a girl, Morgan, since her sponsored housing had run out. It was through her that I met Happie, the Punjabi language teacher of the course. She was just as her name might imply- happy, cute, and fun.

So in late November, I woke up early in the morning and caught a 6am bus to Faridkot, a town in Punjabi near the Pakistani boarder. If you haven’t heard of it, no worries, I couldn’t even pronounce it correctly when I got to the bus station. Four hours later, Happie’s brother picked me up and drove me to her house, a two-story farmhouse. I met some of Happie’s friends from college, friends from Faridkot, and her family. Then the craziness of all the activities began.

Day 1:
Morning: Happie showed me some of her engagement photos with her future husband (they both looked really beautiful, like Bollywood stars or something). She said she had deferred taking more photos until after the wedding because she didn’t feel comfortable with him yet. It was interesting to me how completely calm she was. She had only met him once before (he lives in Canada; she’d been skyping with him for almost a year) but only once very calmly said, “I’m a bit nervous. I don’t really know him.” This seemed to fall in stark contrast to my American friend who recently married her boyfriend of four years (whom she lives with) and was a wreck of nerves before her wedding.

Afternoon: Mehndi (henna) session on Happie’s patio consisting of Happie’s friend and two other girls doing everyone’s mehndi while we drank chai and chatted. Since I had broken my arm three days prior, I only got mehndi on one hand. Happie, as the bride, had incredibly elaborate designs. Her friend produced some eeriously impressive artwork on both her hands and feet. I was sort of jealous of how ornate her mehndi was that I briefly contemplated marrying some random Punjabi man just so he could get a green card and I could have pretty mehndi on my wedding day. 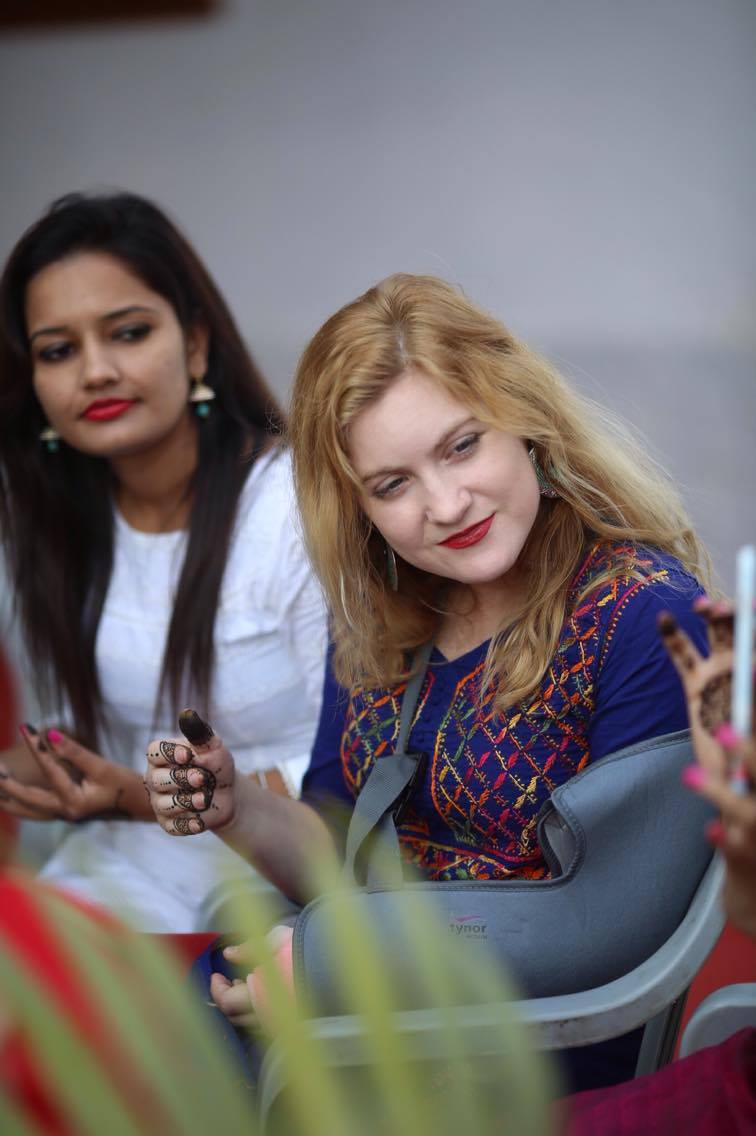 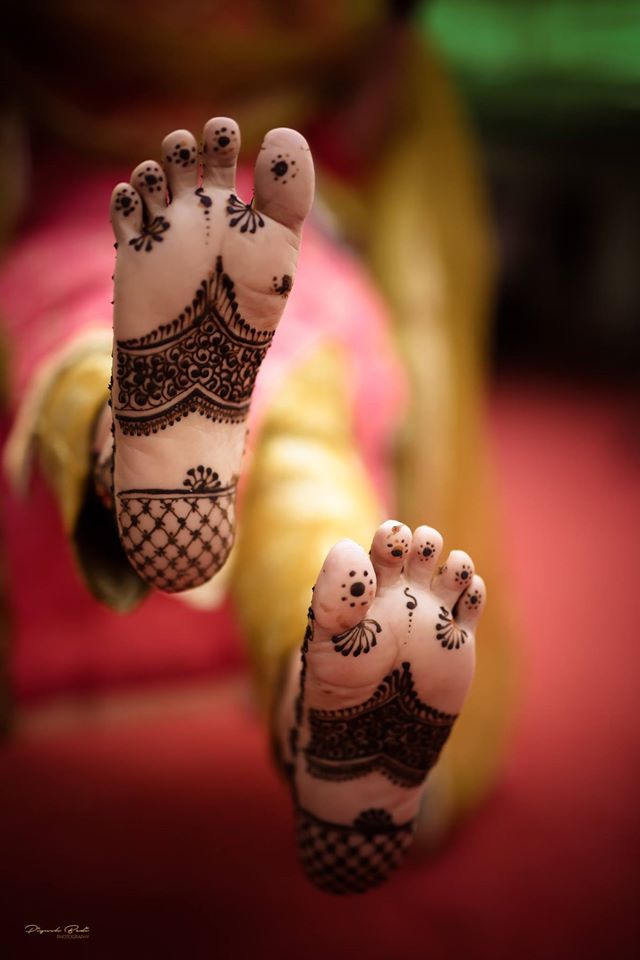 Ultimately, I decided a lifetime of marriage wasn’t worth a day of pretty hands and feet. But the mehndi session was quite fun. 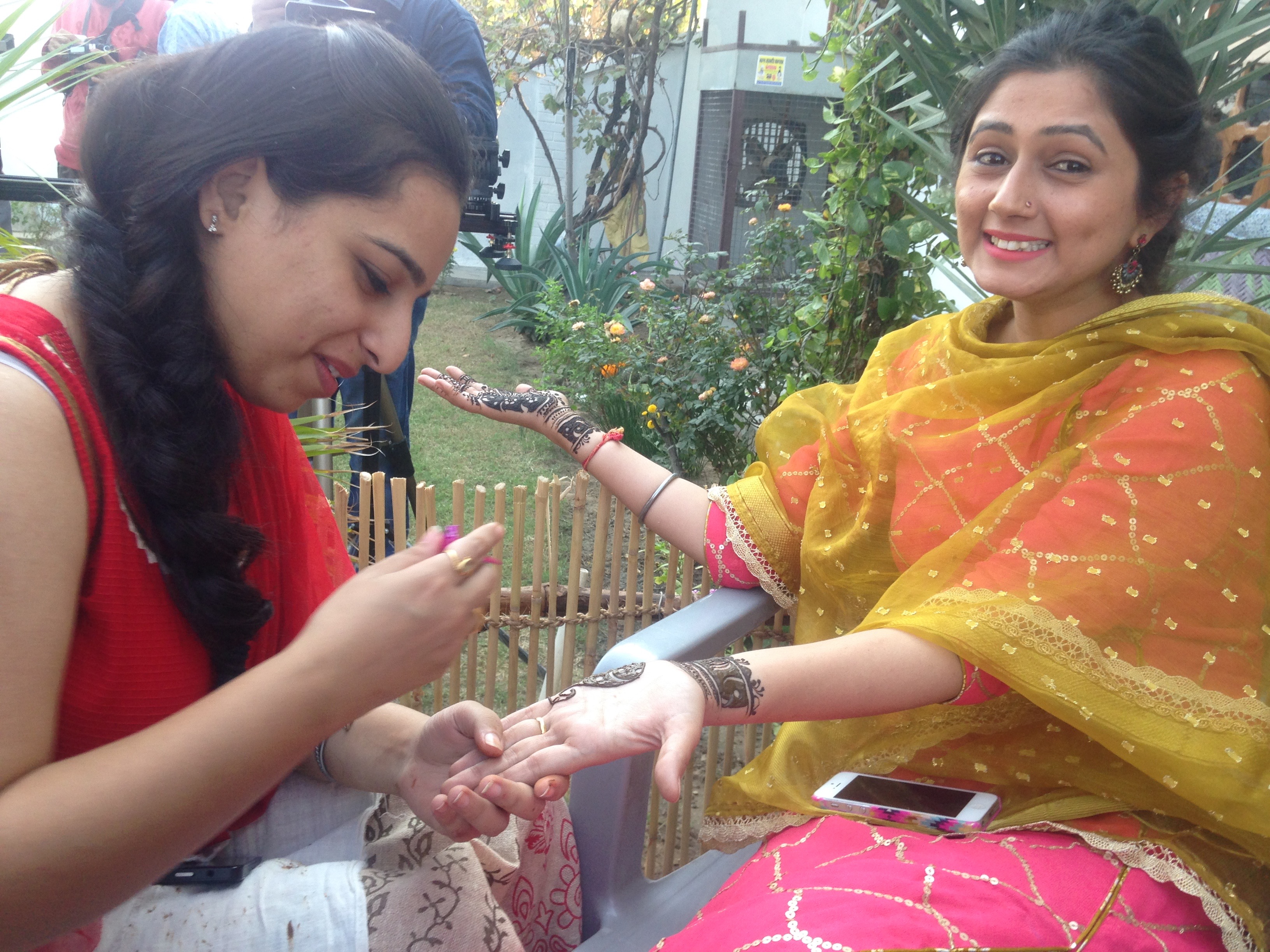 Early Evening: The photographer took photos of all the girls out in the field. 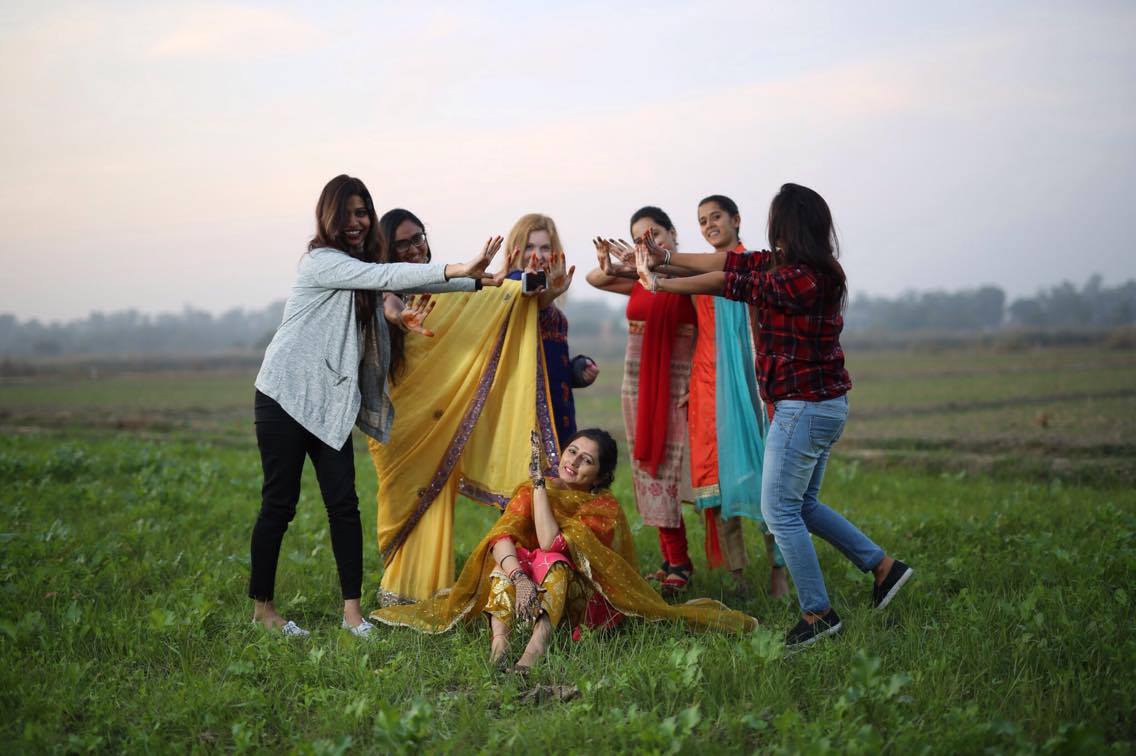 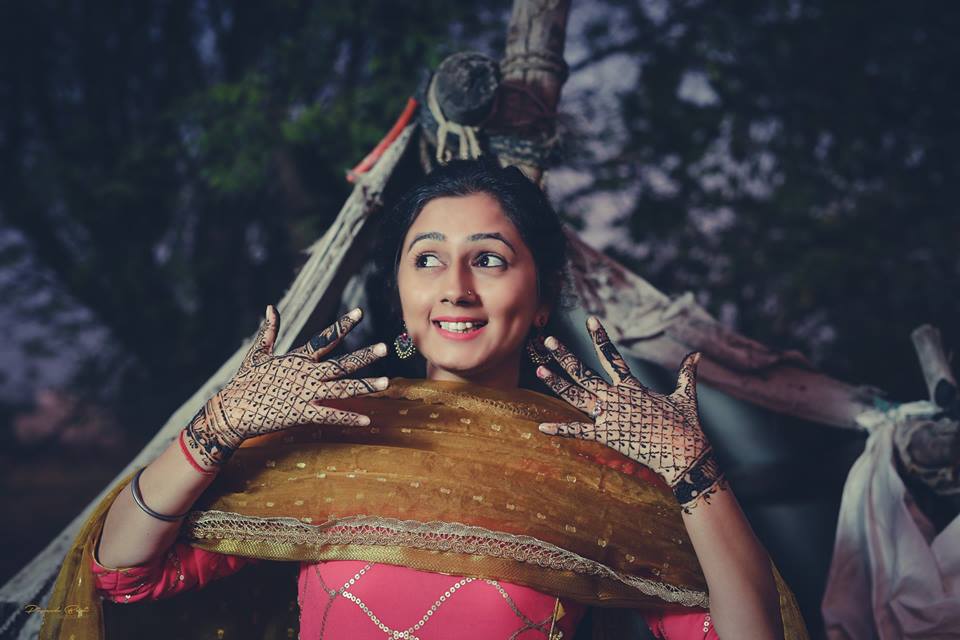 Some of the older women had gathered in the same patio area and were singing together (then one woman would come forward and sing a line or two by herself while everyone kept clapping). Someone explained to me they were singing “marriage advice” to Happie but funny advice. I think an English equivalent would be something like, “Sure you’ll love marriage when you’re on the beach on your honeymoon but just wait until five years of cleaning up his toenail clippings.” (No one said this specifically in Punjabi but I think that was the kind of advice being given). All in good jest, of course.

Evening: I changed into one of my “suits” and met some more of Happie’s friends from Faridkot. We talked inside for awhile before walking around to the back of her house where a large fancy tent was set up, fully furnished with a buffet-style bar, dance floor, speakers, and DJ. We ate and then started dancing.
Everyone danced, even the oldest women (actually, they were the ones who would make you stand up again if you sat down). Some of the older men would throw stacks of ten rupee notes into the air and then hired help would scurry around people’s feet collecting the notes. Then, they started firing guns out in the farm. 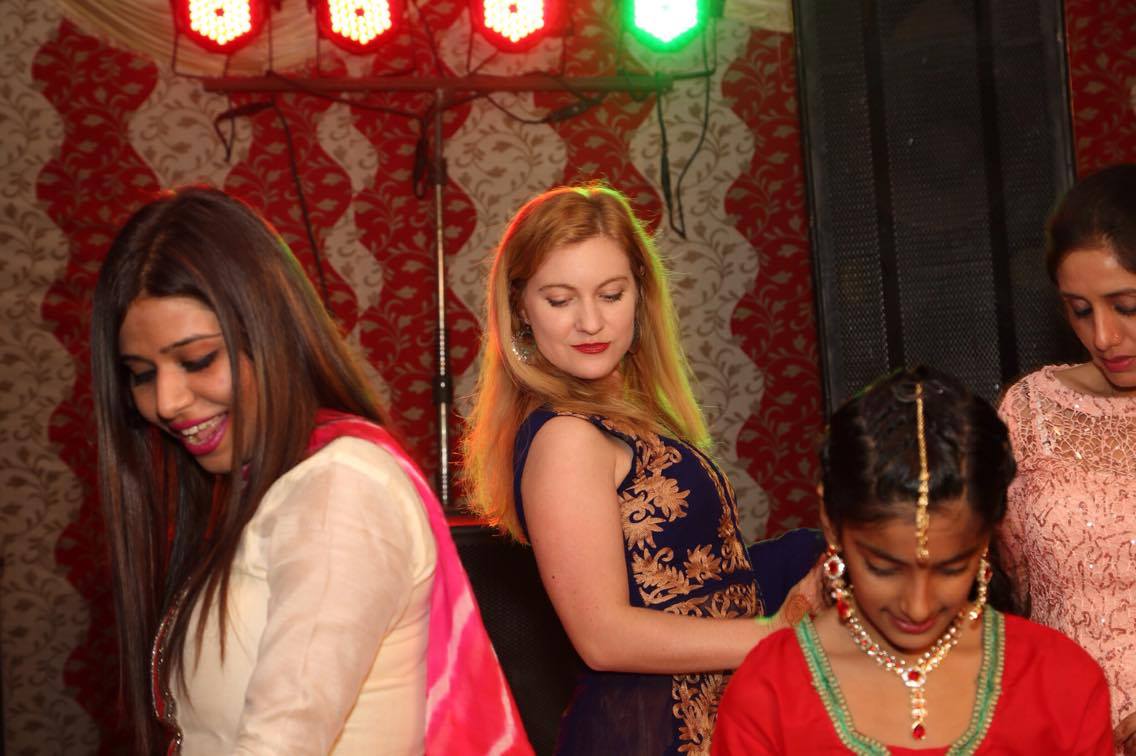 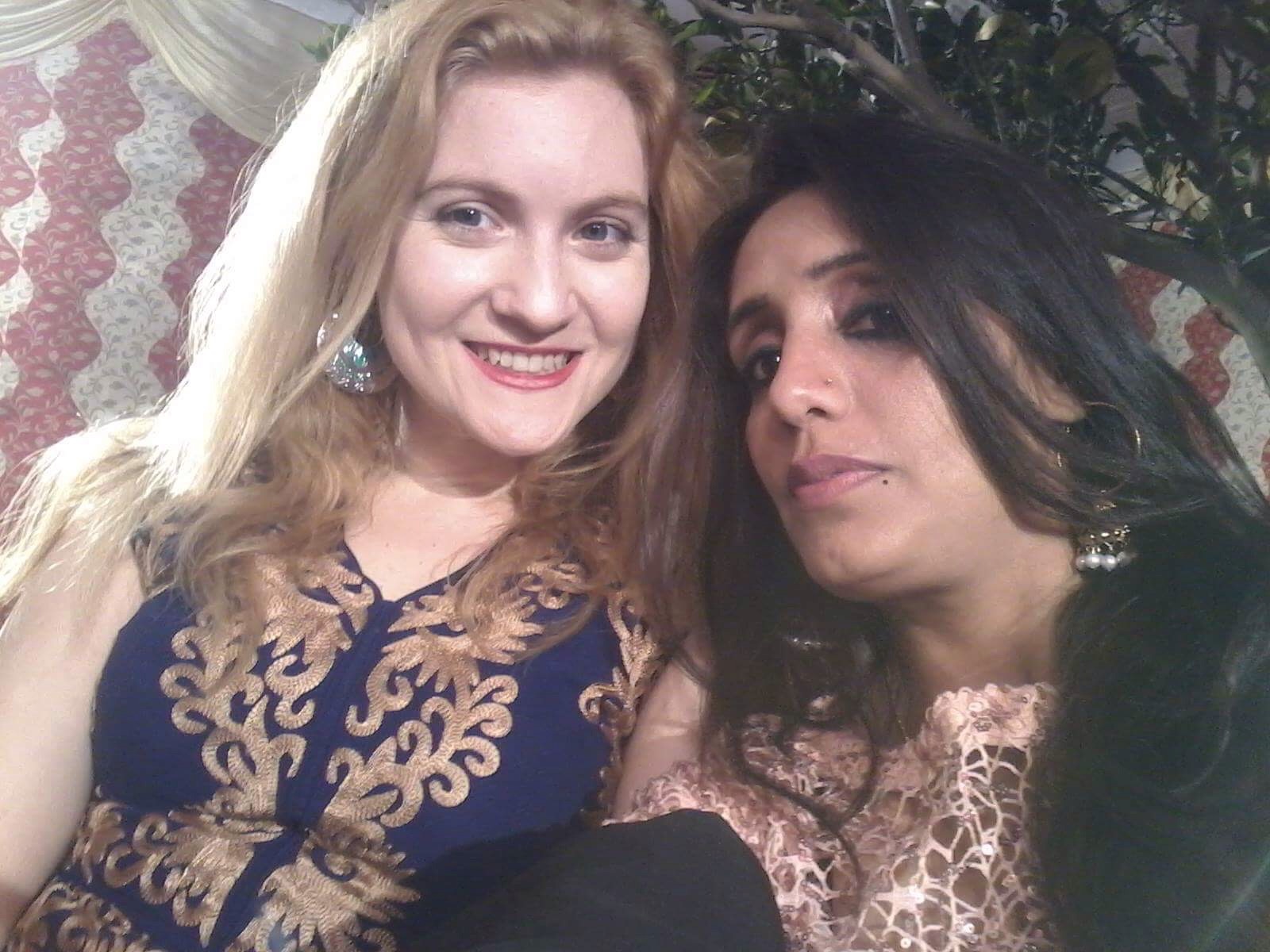 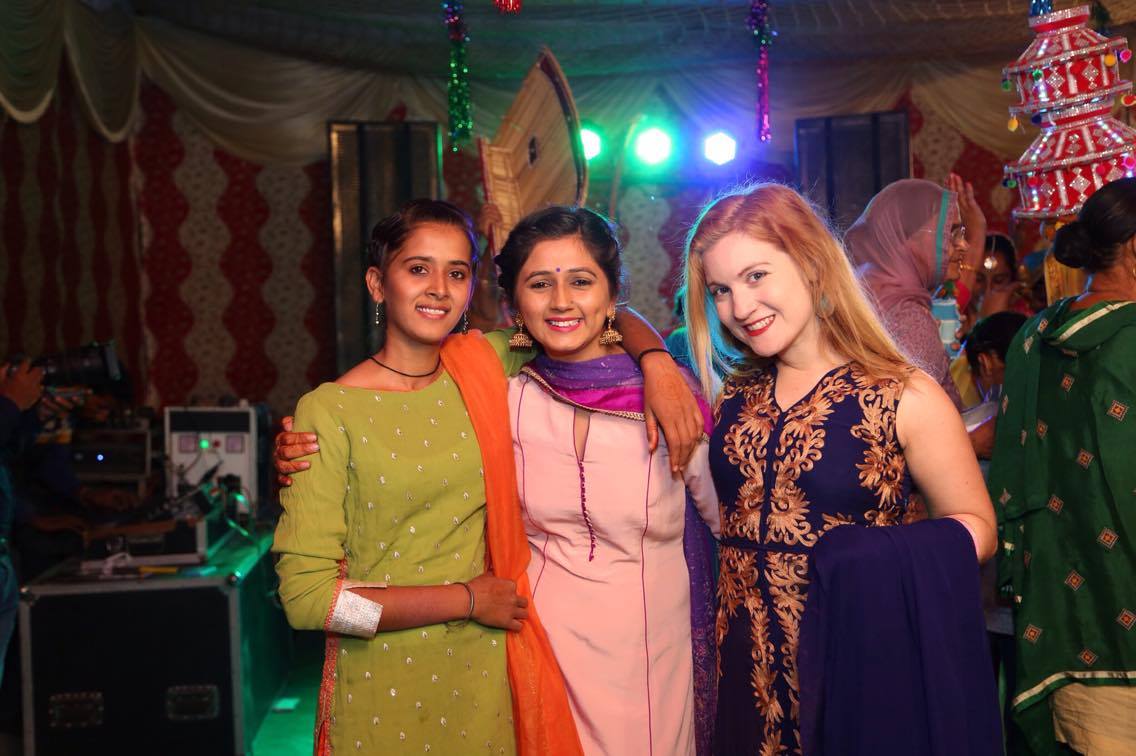 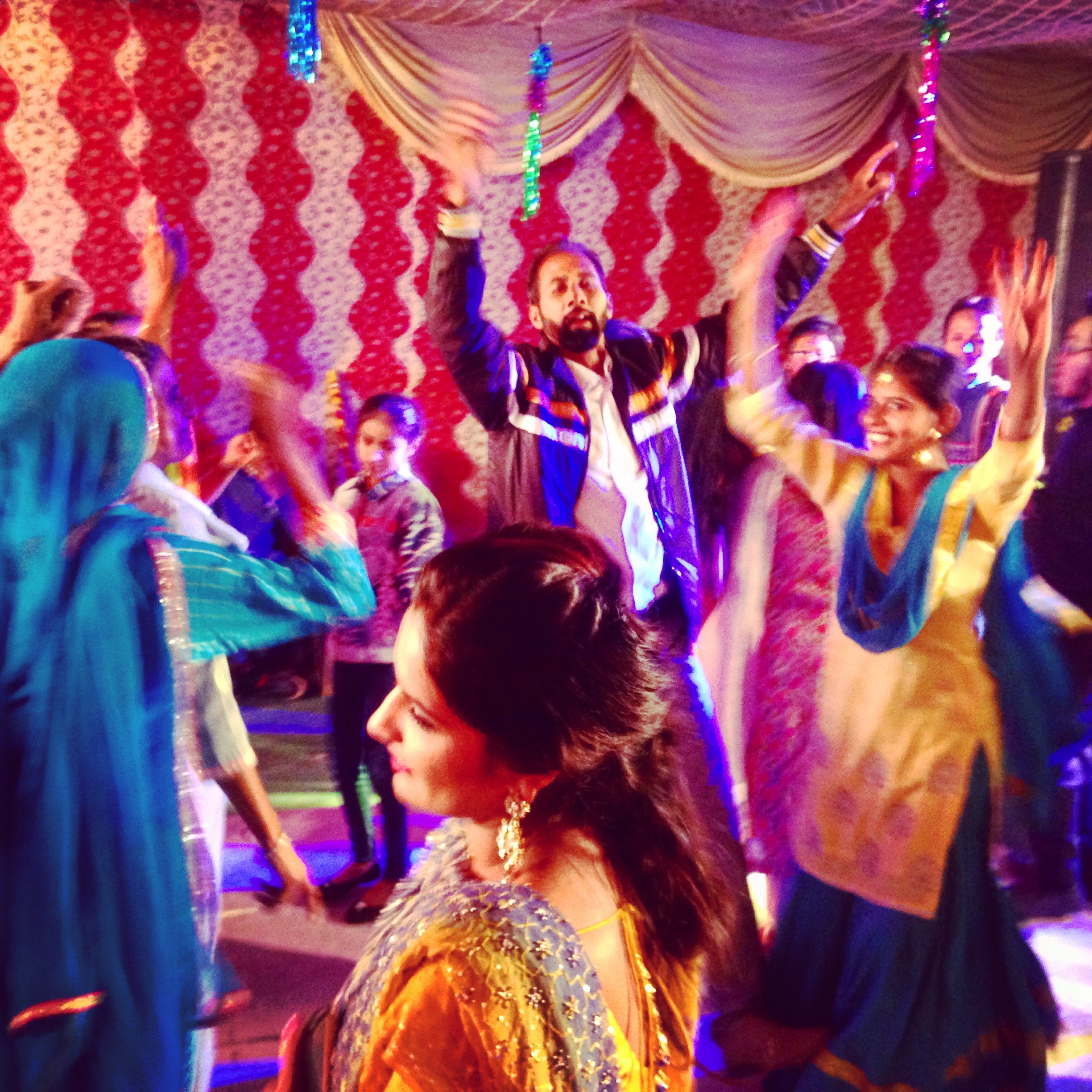 Night: Close to midnight, the family decided to do a tradition (I don’t know the name) in which they cover the bride in turmeric. Turmeric is related to ginger and is usually found as a bright yellow powder. Traditionally, it is used by Indian brides before the wedding to make their skin take on a golden glow. That night we all gathered around Happie on the patio and took turns rubbing a turmeric paste on her face and putting a little oil in her hair. I think this tradition was supposed to be done at 4am before the wedding but I guess since everyone was already at the house, doing it around midnight worked better. 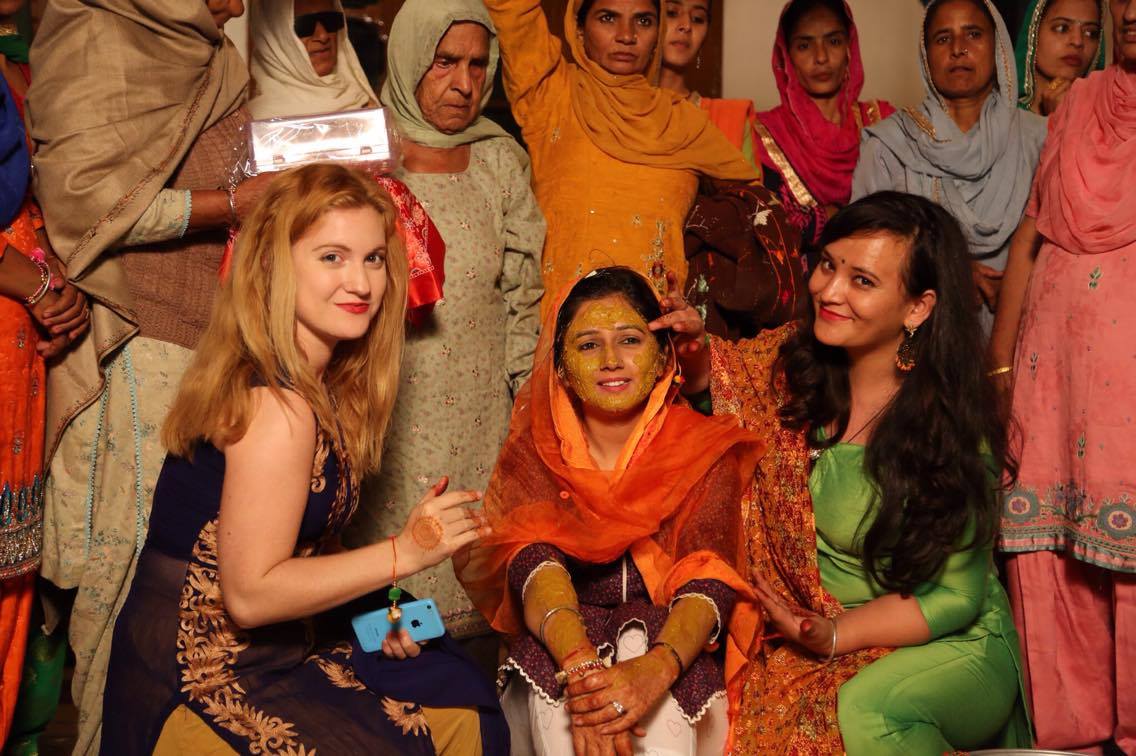 I’ve actually used turmeric paste before. It’s good for psoriasis but stains your skin yellow. Apparently it looks much better on the ‘wheatish’ Indian complexion than on Caucasian skin. While Happie looked beautiful after her turmeric treatment, I never developed the “golden glow”, just an awkward Simpsons’ yellow.

Night continued: It was fun seeing everyone getting ready for bed. Mattresses covered almost every inch of the foyer area for all the male relatives to sleep. I shared a room with Happie’s two friends from college. Everyone just piled into her house and slept there. None of that hotel and privacy nonsense we Americans “need.” 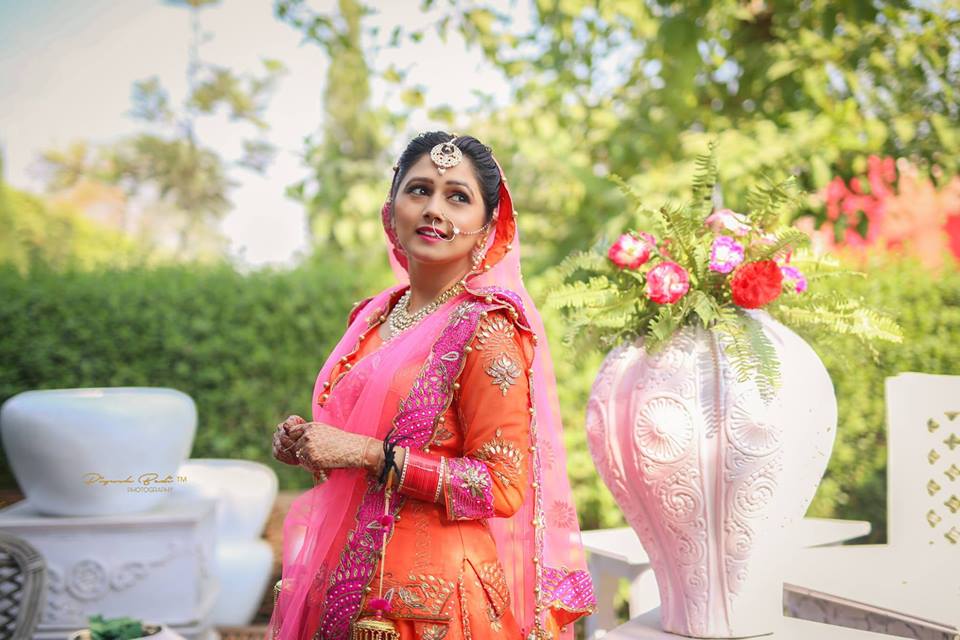 Morning: Breakfast parathas! My favorite part of Punjab. A bit like pancakes, parathas are made from wheat flour and stuffed with vegetables (potato, onion, cauliflower, radish, etc..). They are fried and one eats them with dahi (curd, plain yogurt).

Then I started getting ready. From Happie’s house we drove down the road to a very large event center where Happie was in the middle of a photoshoot looking totally fabulous. Indian brides typically wear bright colors (red most traditionally but I’ve also seen orange, yellow, and pink). Seeing Happie all dolled up, I developed Indian wedding envy again and started rethinking my potential random Punjabi green card marriage ever-so-slightly. 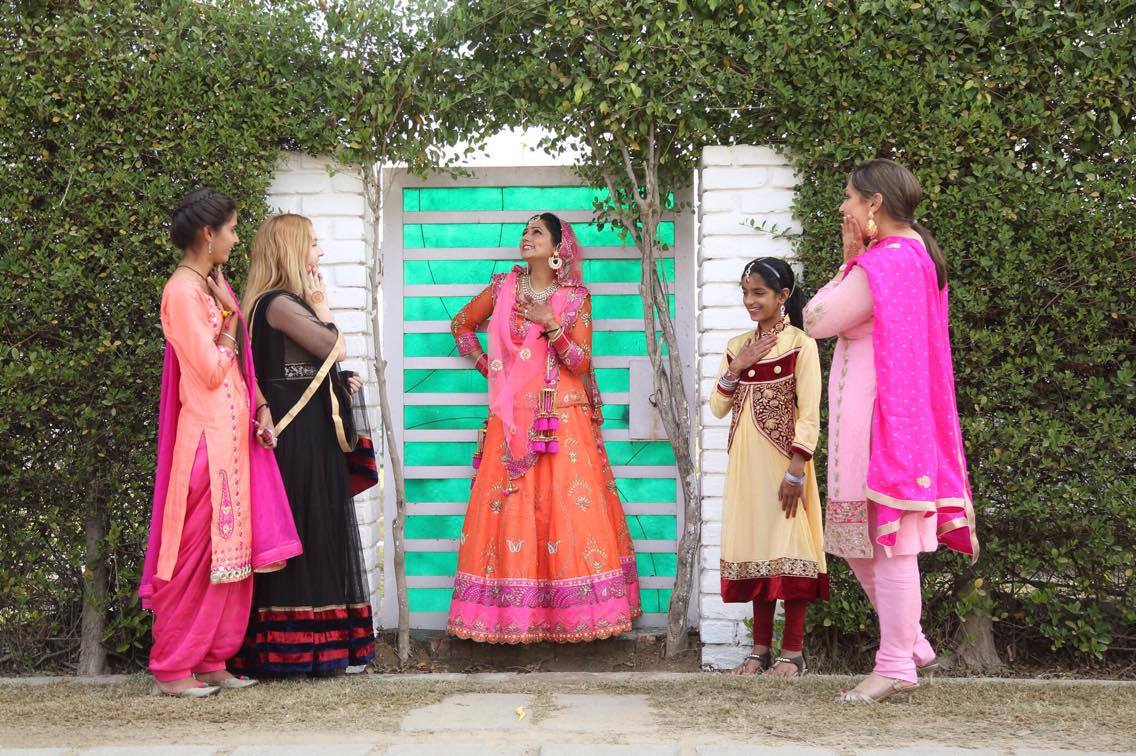 Afternoon: The groom’s family arrived at the event center. The bride’s family had a long ribbon blocking them from entering the premises. The groom bargained with her friends and female cousin. In order to “get to” the bride, he must agree to pay a price to the sister/young female relative. I don’t know how much he agreed to pay. I know they started off with $1,000 but came down to something reasonable pretty quickly.

Then we all drove to the Gurdwara (Sikh place of worship) for the marriage ceremony. Happie’s cousin stayed with me to make sure I didn’t embarrass myself. We left our shoes outside and covered our heads, walked in, knelt before the alter, put some money in the donation box, and moved to the side. I was pretty happy about the “moving to the side” bit because the fancy leggings that came with my dress were much too large. This could be solved by tying them tightly, but with a broken arm, I couldn’t tie them properly. Lest, I spent most of the ceremony worried about keeping my pants on. The cousin came to my rescue after and tied them properly for me in the bathroom.

The religious ceremony was short and sweet, about the same length as a typical Protestant wedding ceremony. Some words were read in Punjabi, and Happie’s finance lead her around the alter with a piece of orange fabric four times. 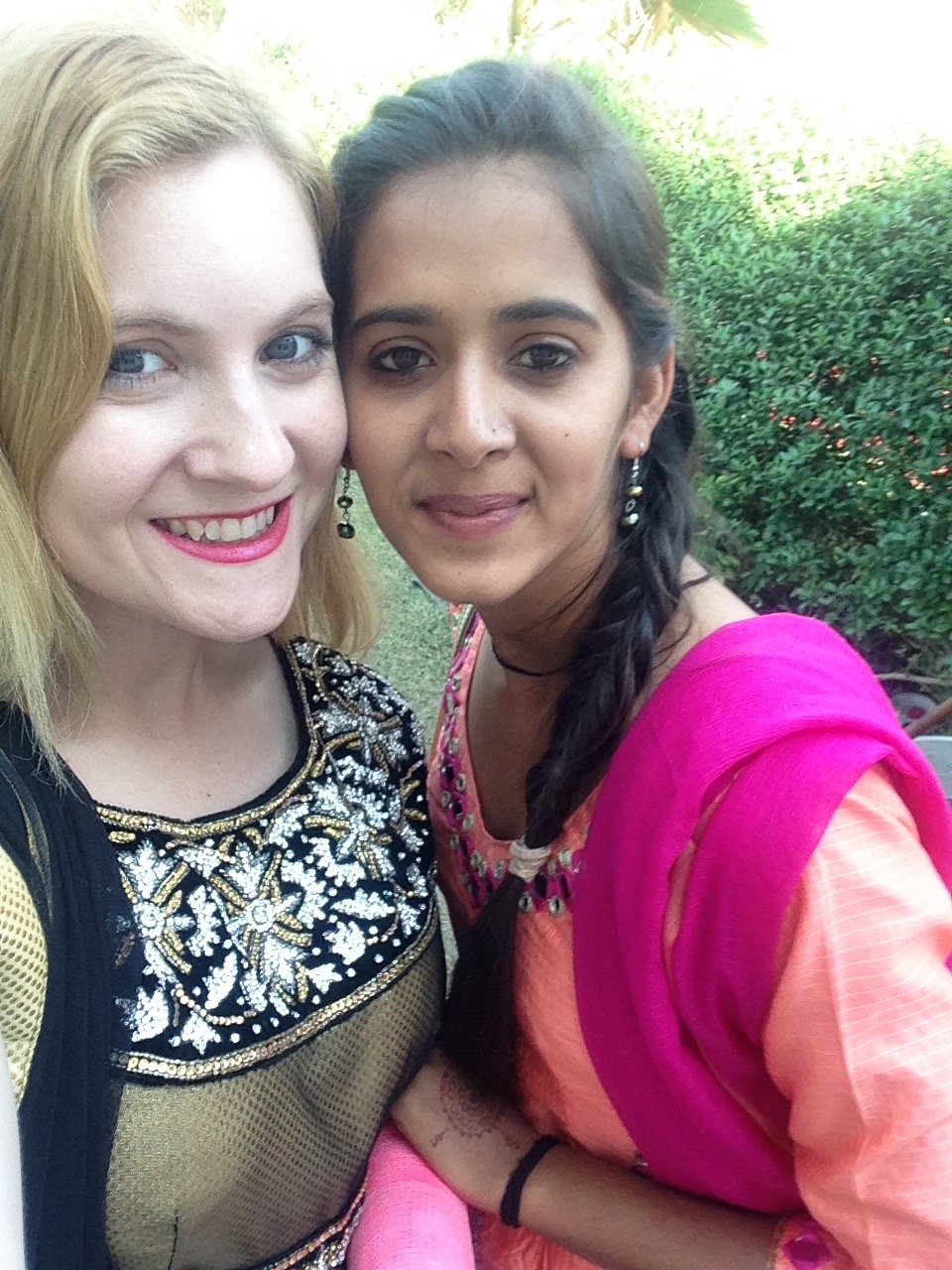 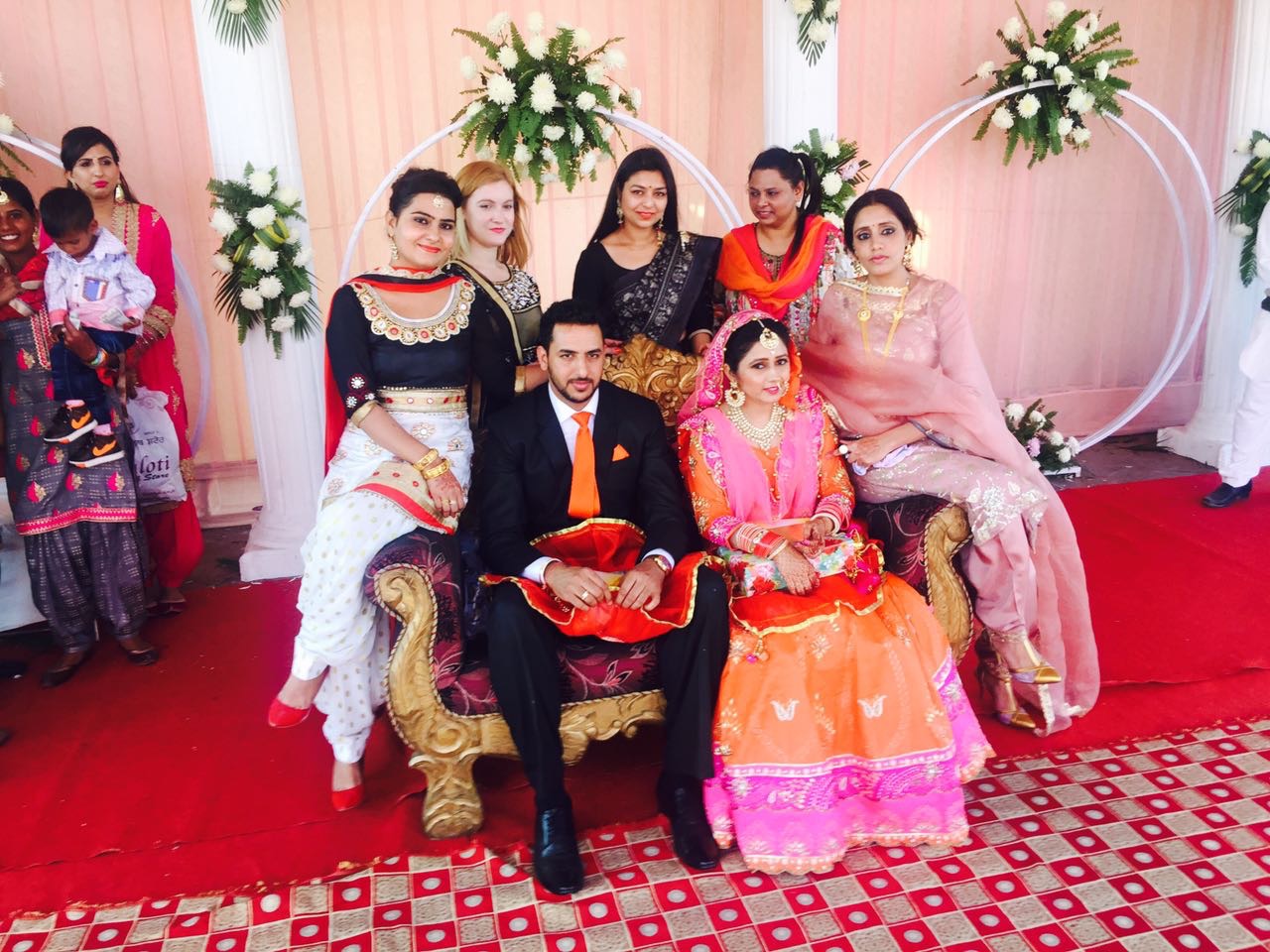 We returned to the event center. The entire area was decorated with nice chairs, couches, tables, and decorations. There was a stage with music and a large buffet area in the back. I’m guessing around 500 people had attended. Happie and her new husband sat on the stage as the guests lined up to say congratulations and give them money as a present. After a few hours, I went inside with some of her friends were there was another buffet. Happie ate with the groom’s family.

Send Off: Even though Happie won’t be moving to Canada for a few more months, the symbolism in Indian weddings (and American weddings) can be a bit overwhelming. Just like how in the US our Dad’s walk down the aisle and “give” their daughters to the grooms, symbolizing a departure from daddy to hubby, Indian weddings do something similar. In Happie’s case, she symbolically left her family and got in a car with the groom’s family and drove off. She gets slightly teary-eyed during this process, understandably.  Also during this time, older uncles were again throwing handfuls of money on the couple and on the car. In this case, the hired help even climbed on the car the collect the rupees. 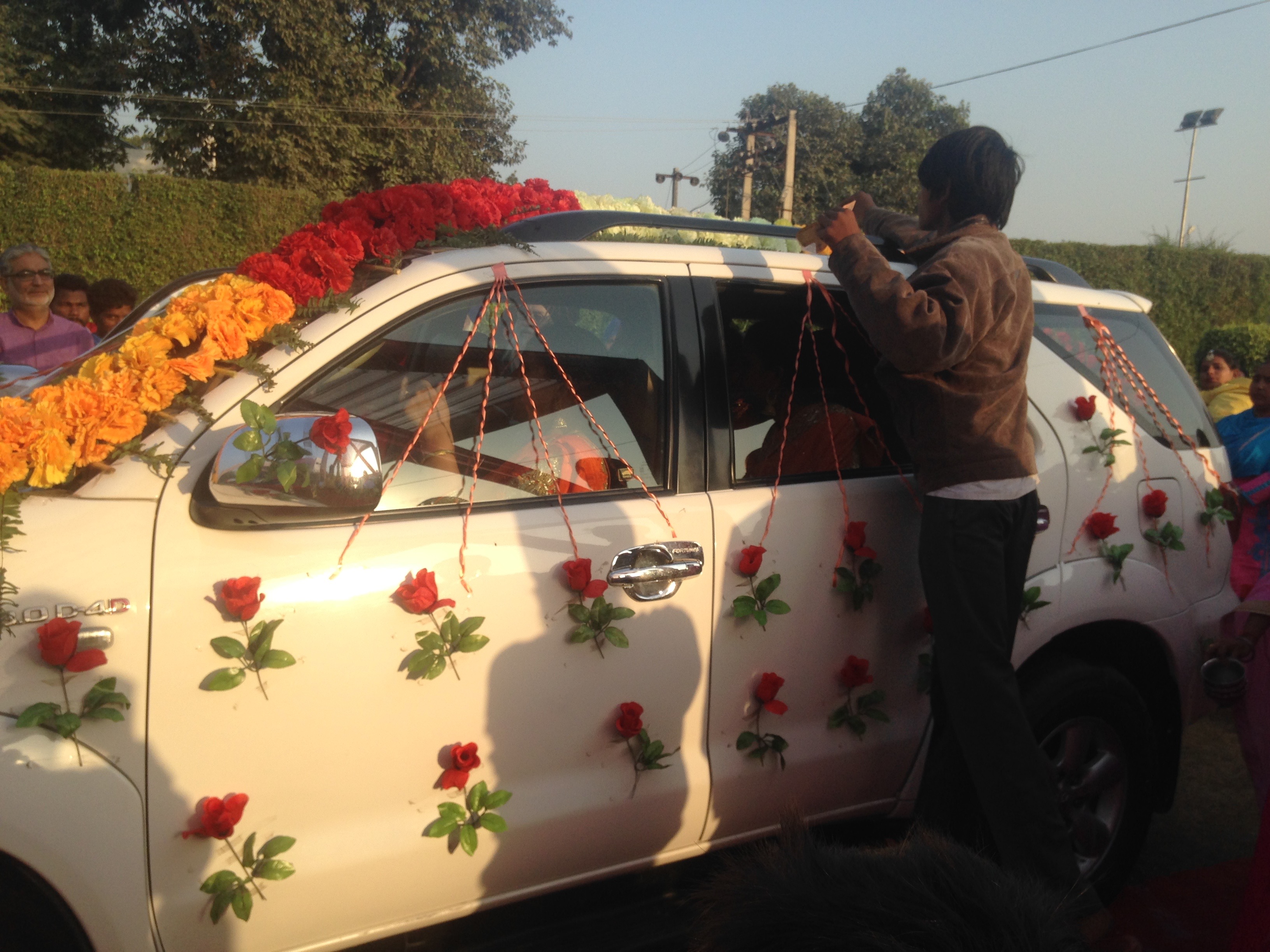 Evening: Happie’s friend, Aman, invited me to her house for the evening. I met her family and she took me into Faridkot to the main Gurdwara.

Overall, it was a really wonderful experience. Unfortunately, there was a bit of a language barrier between me and most of Happie’s family/guests. Despite that, her family went out of their way to involve me and get to know me. I really enjoyed just observing the craziness and excitement in her house. Also, her friends all spoke English and explained some of the traditions as well as just chatted with me casually. In all, it was by far one of my favorite weekends in India.