If I had to make my relationship status with India “Facebook official,” then it’s complicated is really the only accurate description I could give it. Just last week I was plotting to write a very negative post about falling out of love with India and being really excited about my flight back to the US (Feb 1st).

But this weekend was Makar Sankranti, a festival marking the first zodiac change after the winter solstice and celebrating the increasingly long day-light hours. This information I actually found out just now on Wikipedia. Before now, all I knew about Makar Sankranti was that it’s celebrated by everyone in the city standing on their roofs and flying kites. Not just flying kites actually, attempting to cut other people’s kites. Some places are more famous for this than others. Notably Ahmedabad and Jaipur. Last year I saw a bit from a distance in Mumbai, but it was nothing like this year in Jaipur. 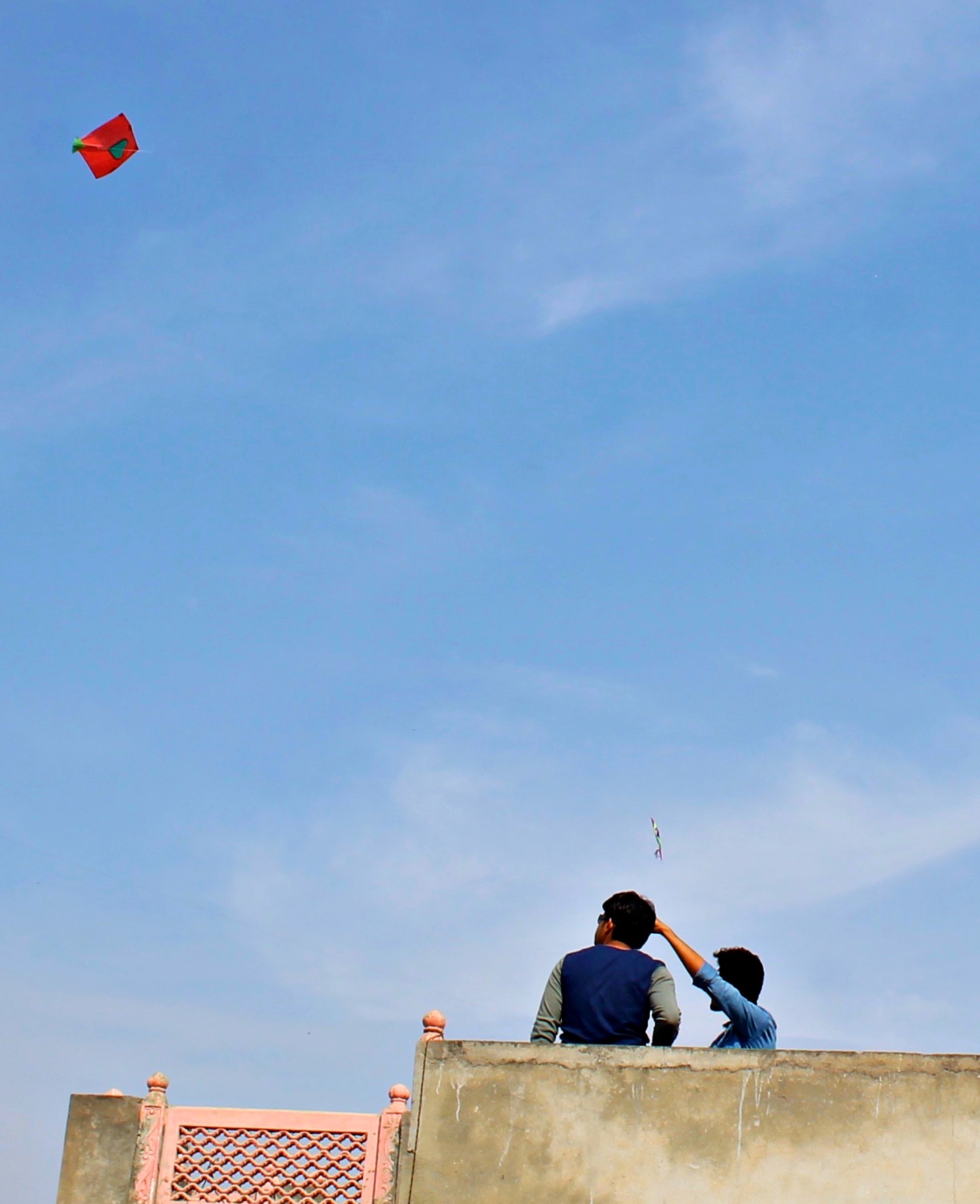 After I missed my afternoon train from Delhi to Jaipur the day before, I got stuck taking a 2am bus and only reached Jaipur at 7am. I took a nap and then my friend Cameron (whom I met teaching English in Prague and who is currently backpacking through India) met me at the hostel. Then we were off to Saksham’s house.

Climbing onto Saksham’s roof was more complicated that just climbing some stairs, but if his mom could manage in a sari, then even with my still-healing wrist I figured I had no excuses. Honestly, the day was pretty relaxed and chill since I didn’t do much kite flying. I did fly a little, but it was more fun just watching all the boys attempt to cut people’s kites. Rohit explained that the strings they buy have microscopically cut glass dried into them, so when you get your string at the right angle and with enough force, it will cut the string to another kite. The more kites you cut, the better. You can hear people yelling triumphantly from their roofs anytime they cut one. 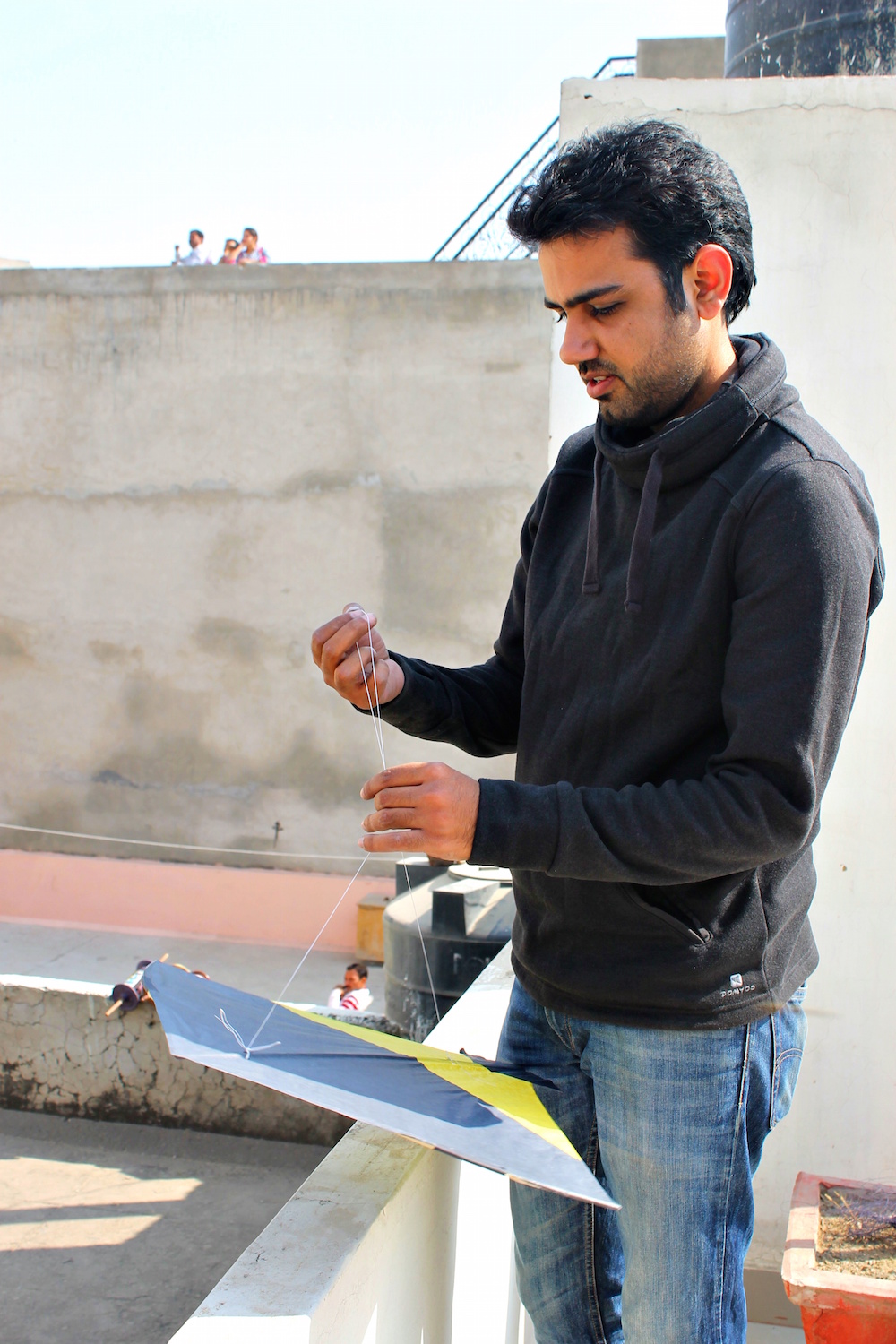 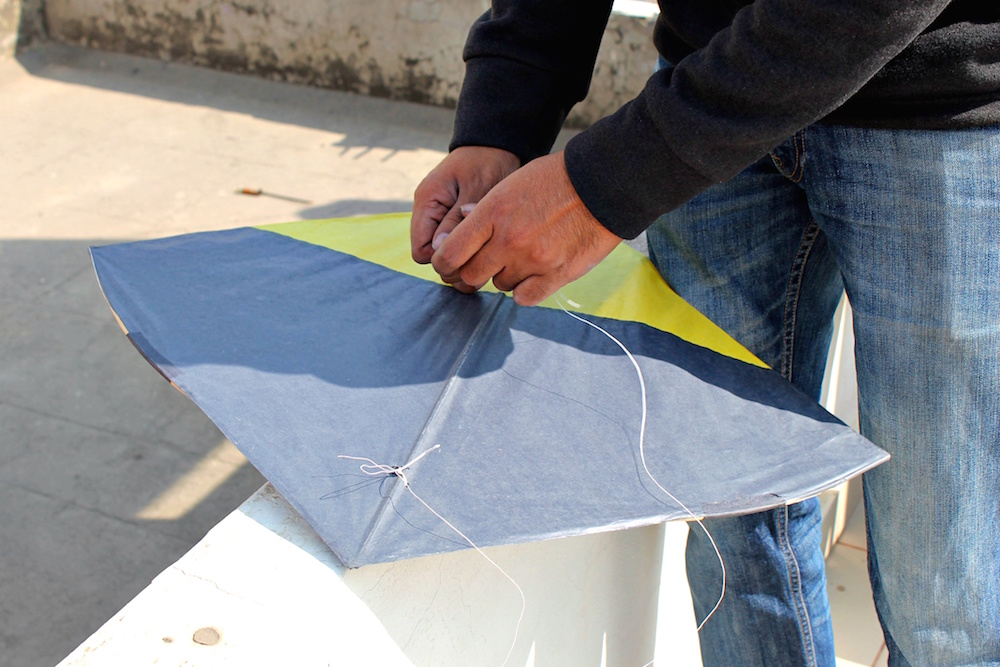 Actually, the whole thing is pretty brutal. The glass slices your fingers and every year there are some gruesome injuries from when a fallen string is being pulled in two opposite directions and someone on a scooter drives into it, cutting their face or their eye. 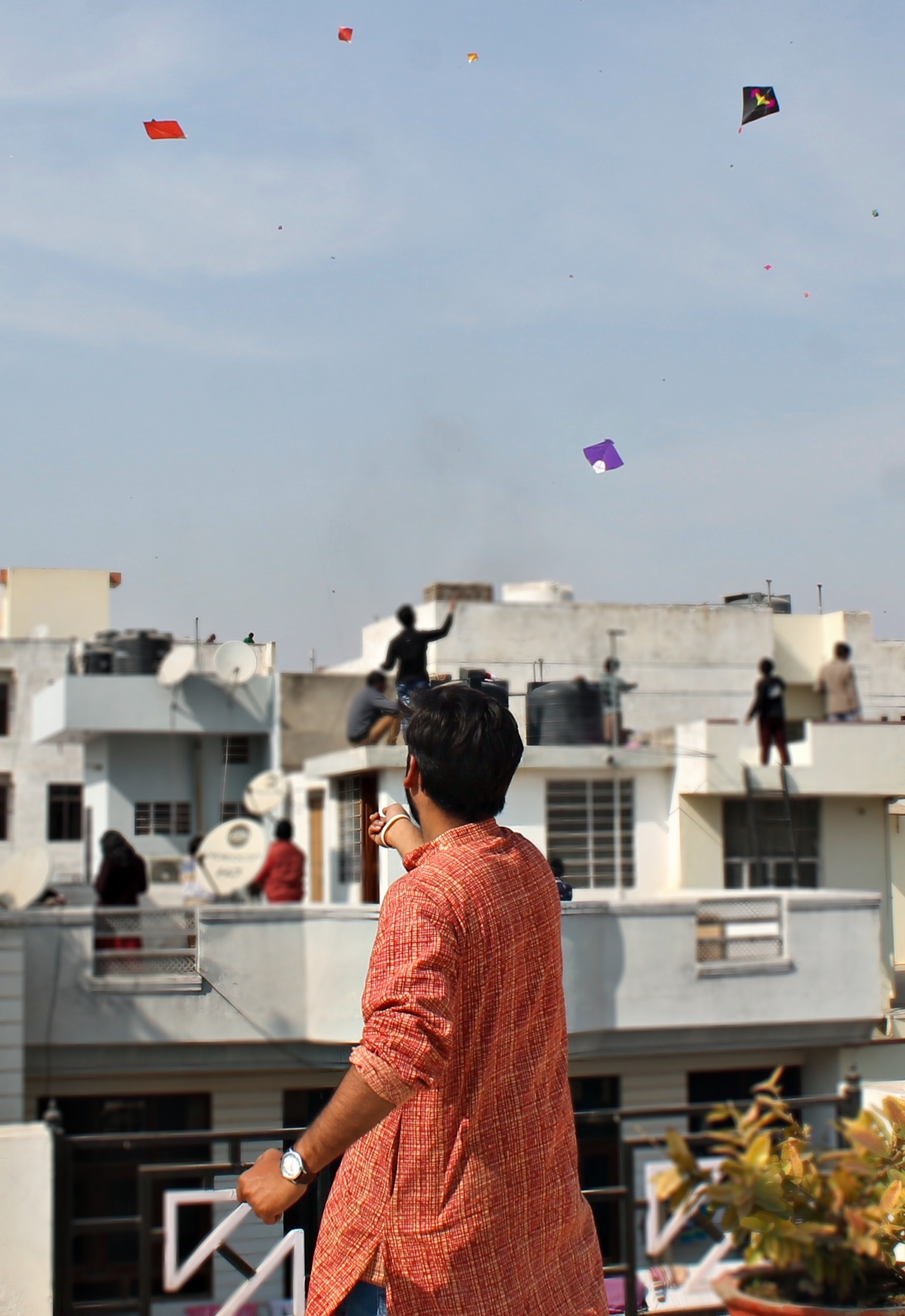 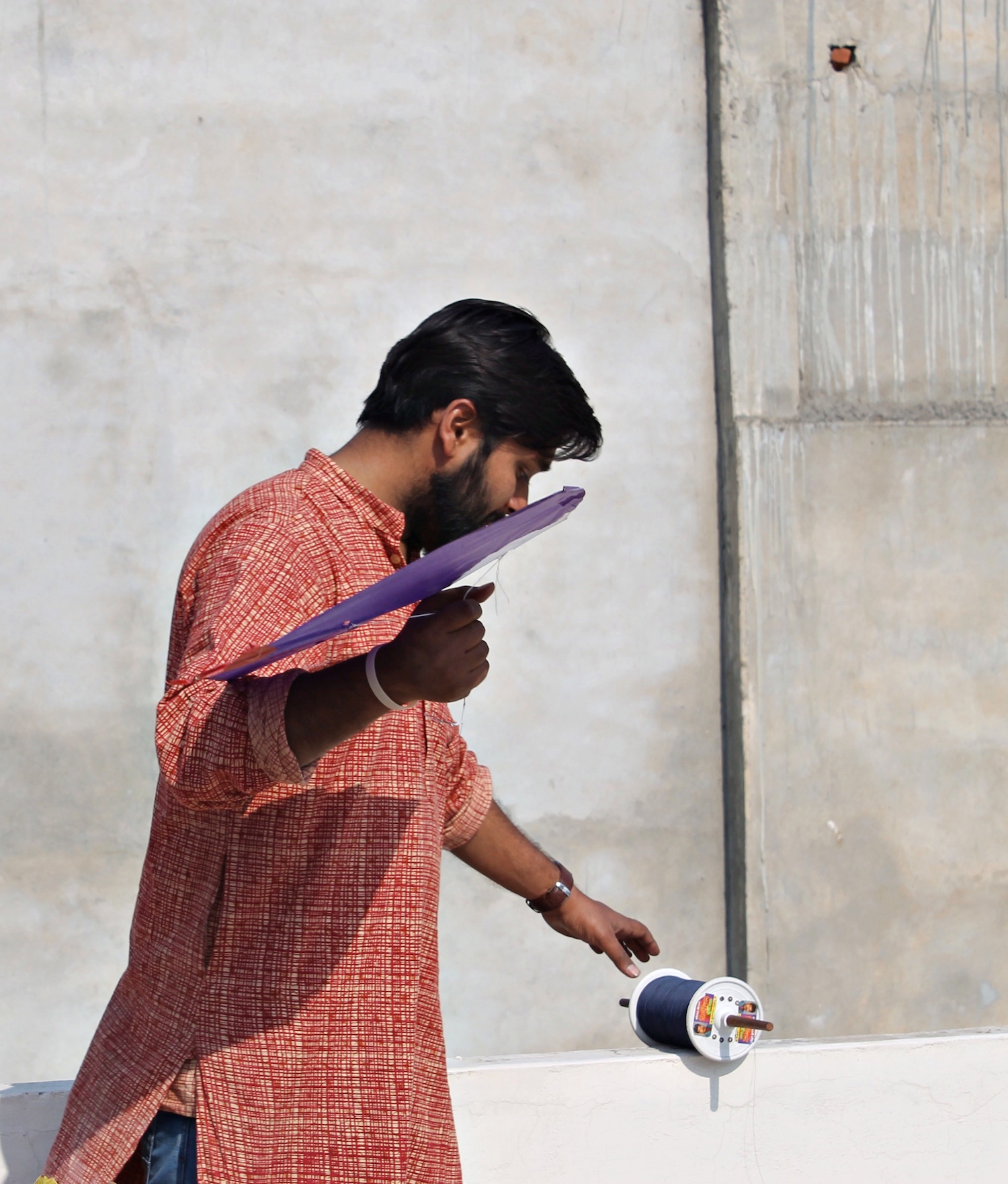 There is a bit of a lull around 1-3pm when people eat lunch. Saksham’s mom made us some delicious homemade food. Then we went back on the roof. As evening fell, so many little kites dotted the sky, too many and too distany to pick-up on my camera. 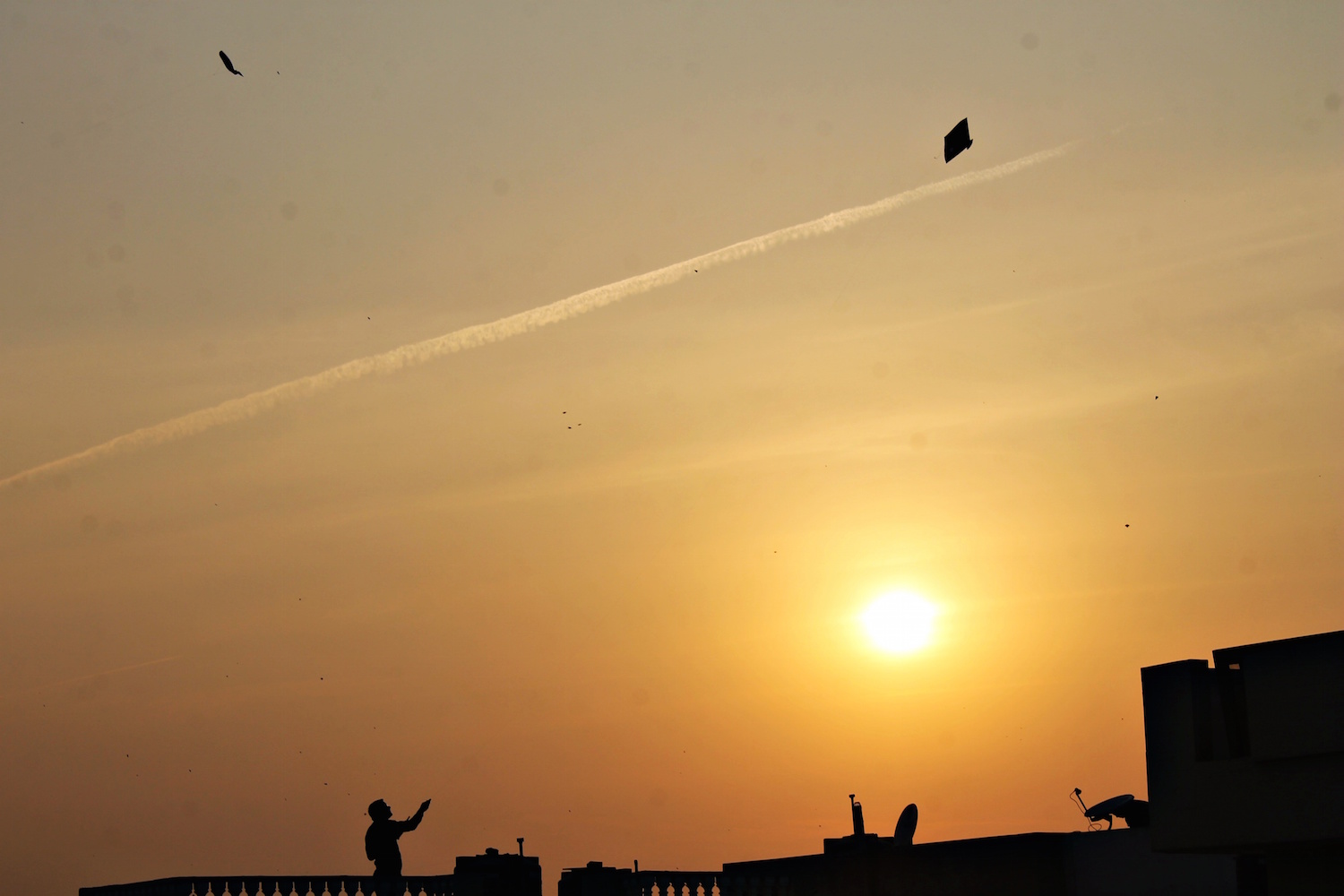 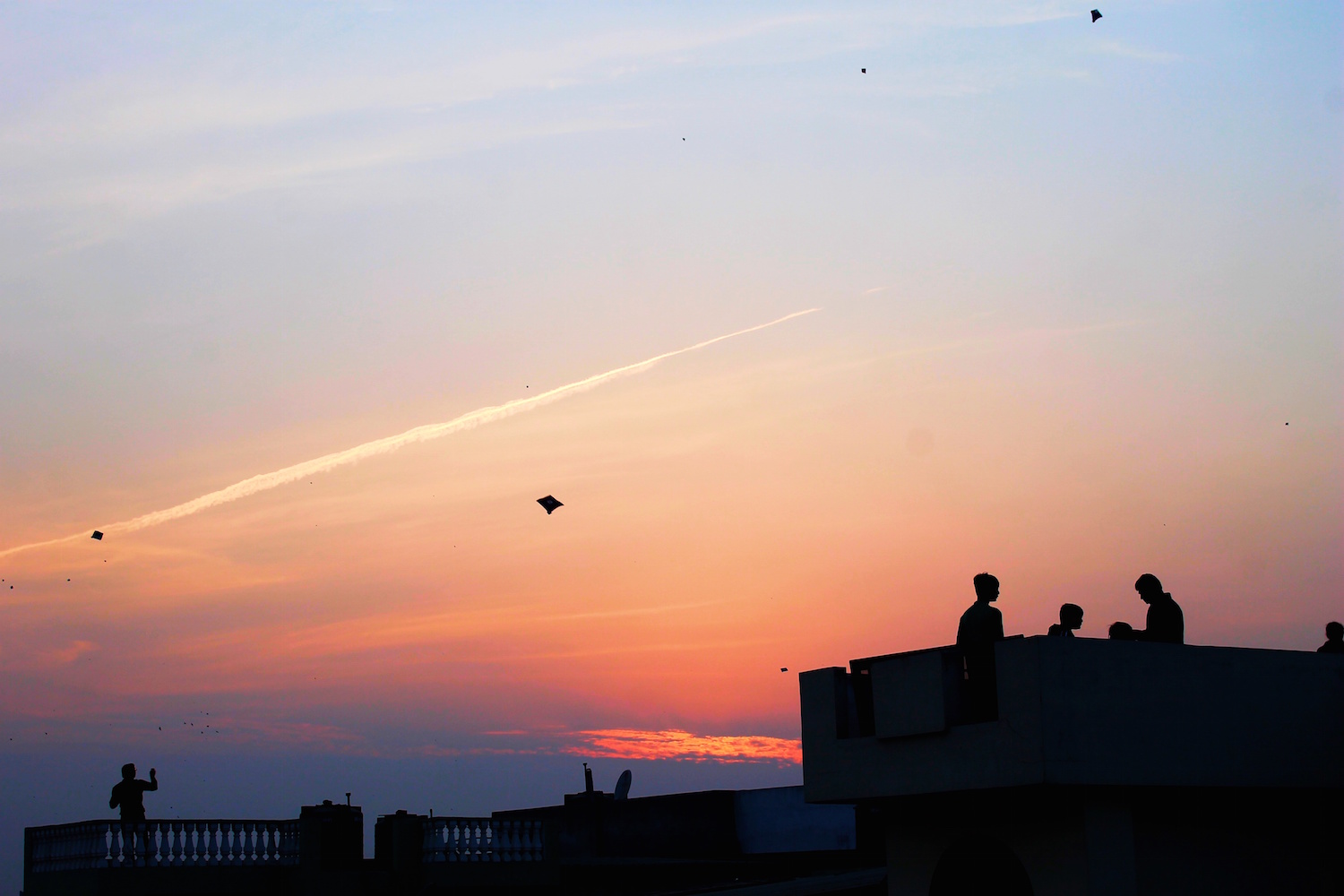 As it got dark, the city filled with lights. People set off firecrackers on their roofs, including Saksham and his friends who kept kicking little ones at each other. Saksham’s dad had a wonderful time setting off something that sounded like a bomb. People also lit Chinese lanterns and the blue sky dotted with black kites was replaced by deep blue dotted by orange. 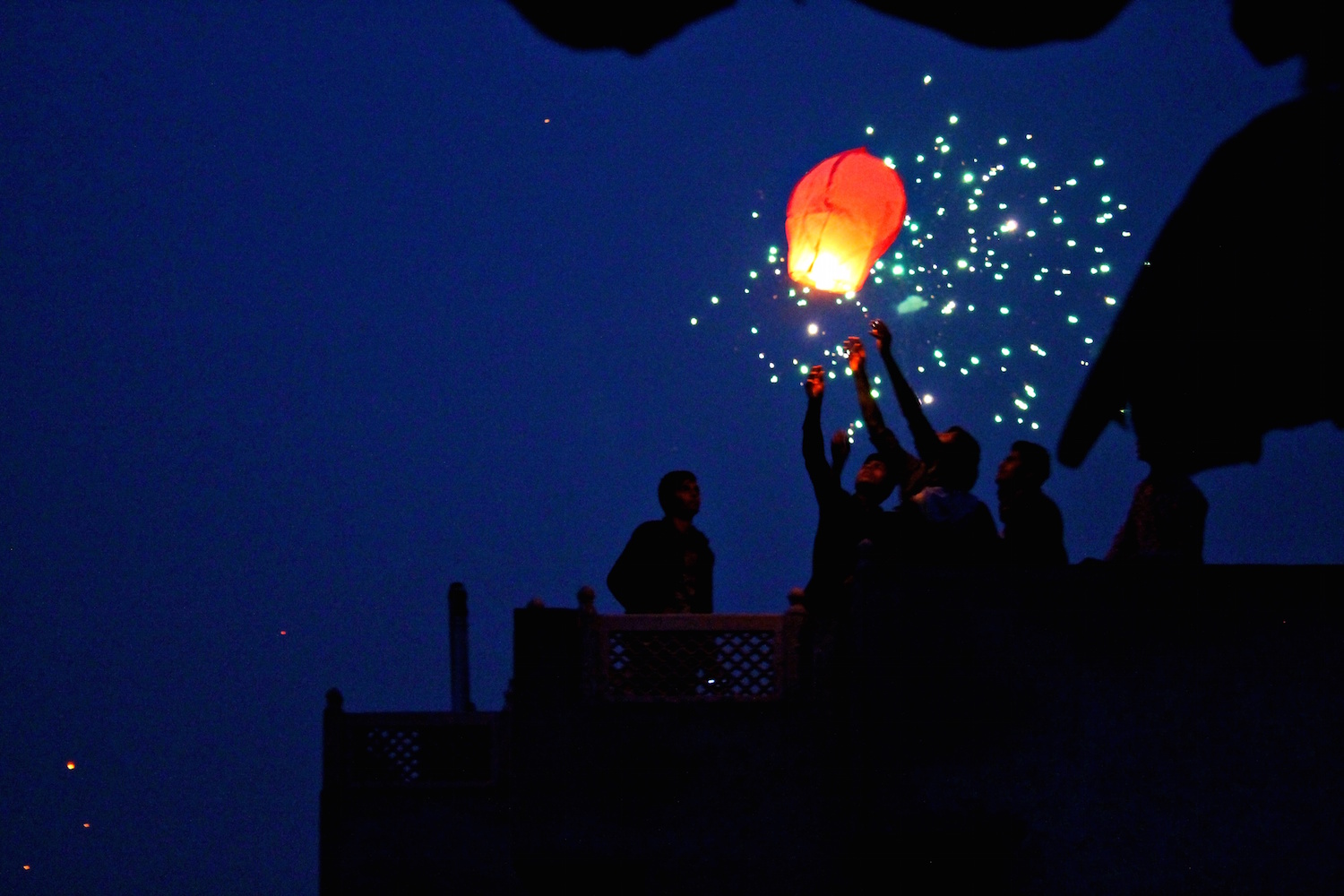 I don’t think this festival can beat Holi, the festival of colors, but it was probably my second favorite. Honestly, for all the crap that frustrates me about India, these little moments standing on a roof and watching and entire city fly kites with their friends and family make me really sad about leaving. As cliche as it is, the strong sense of tradition and community here is something unparalleled in any other place I’ve lived, especially when you feel invited into that tradition by your friends and their families. 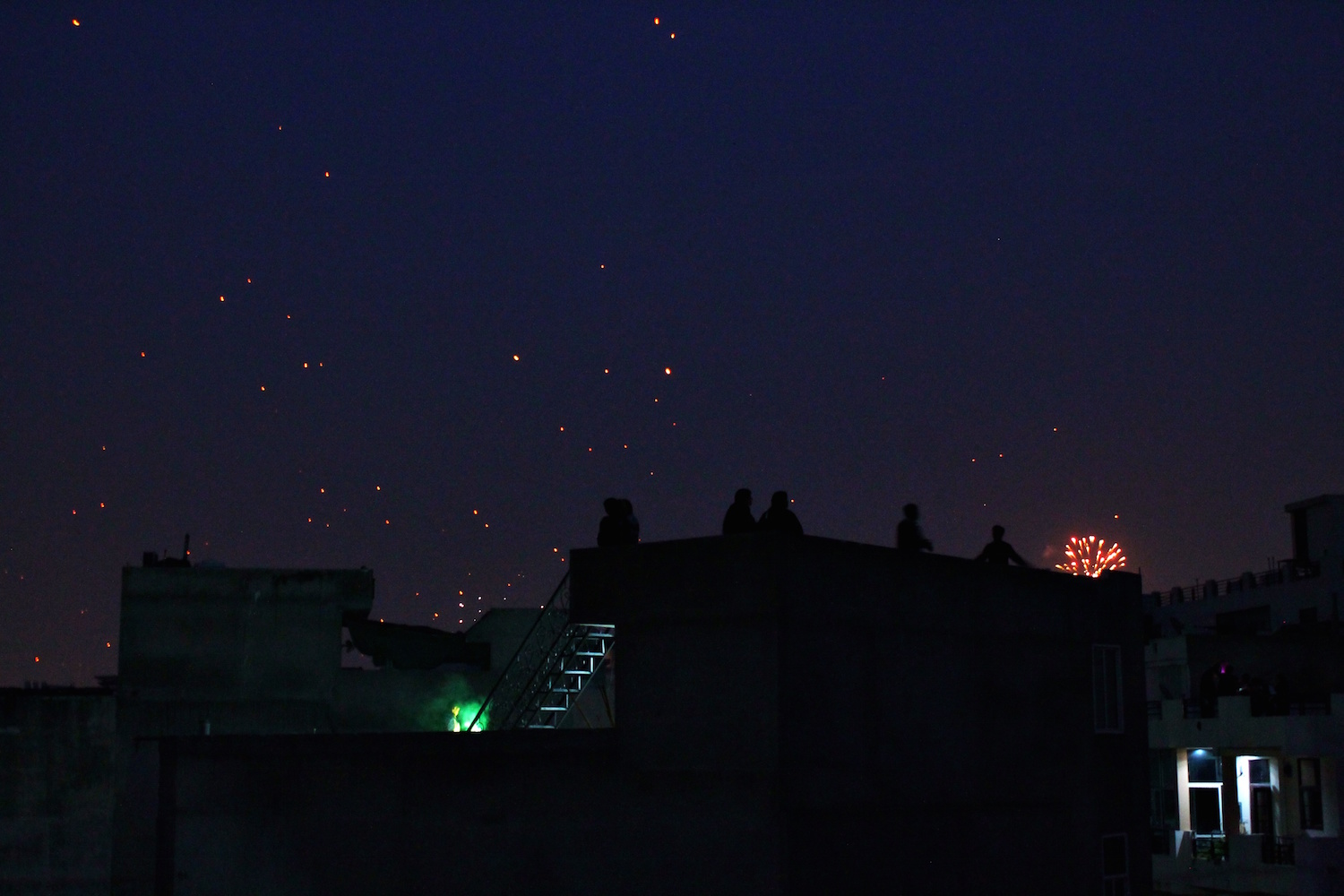 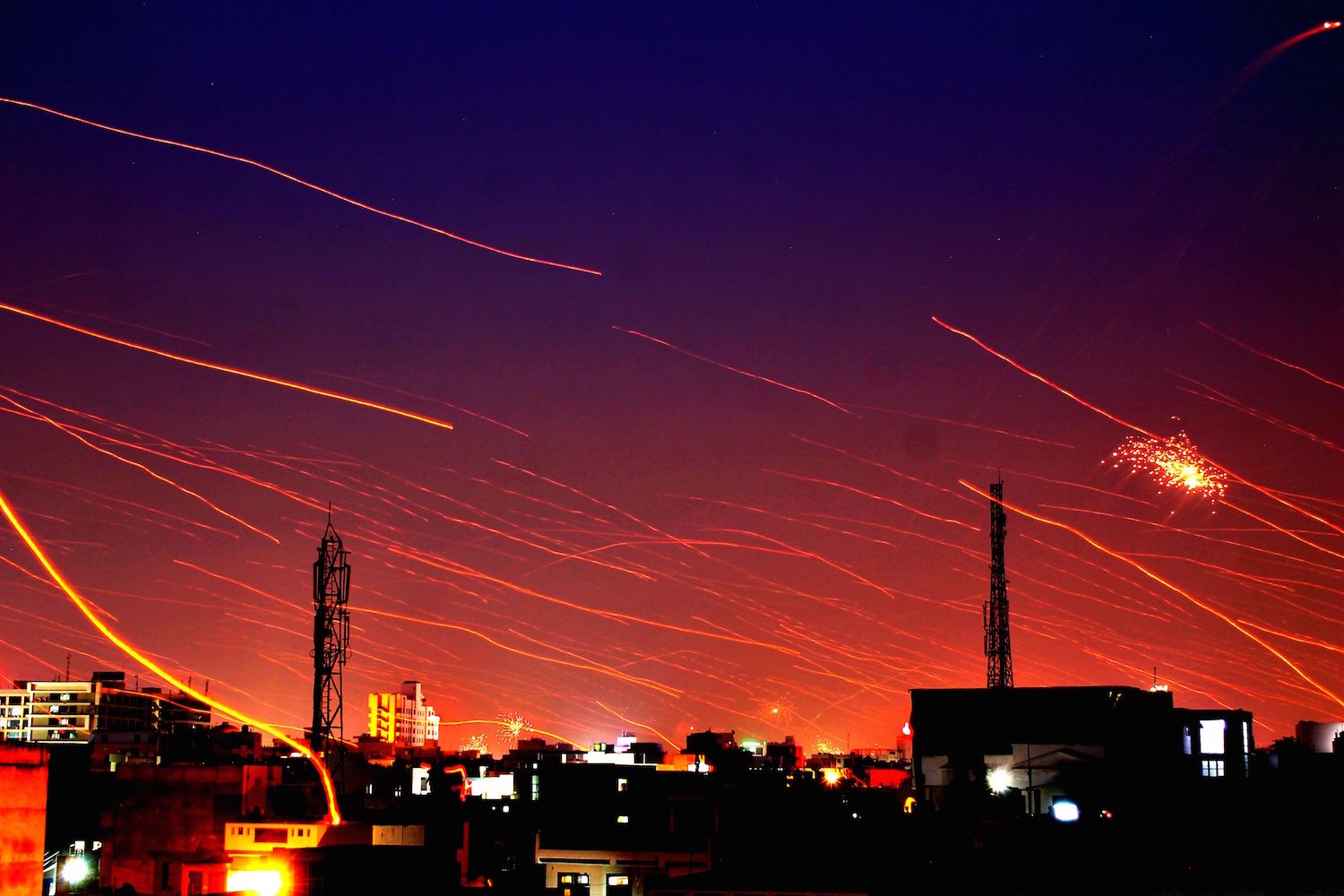 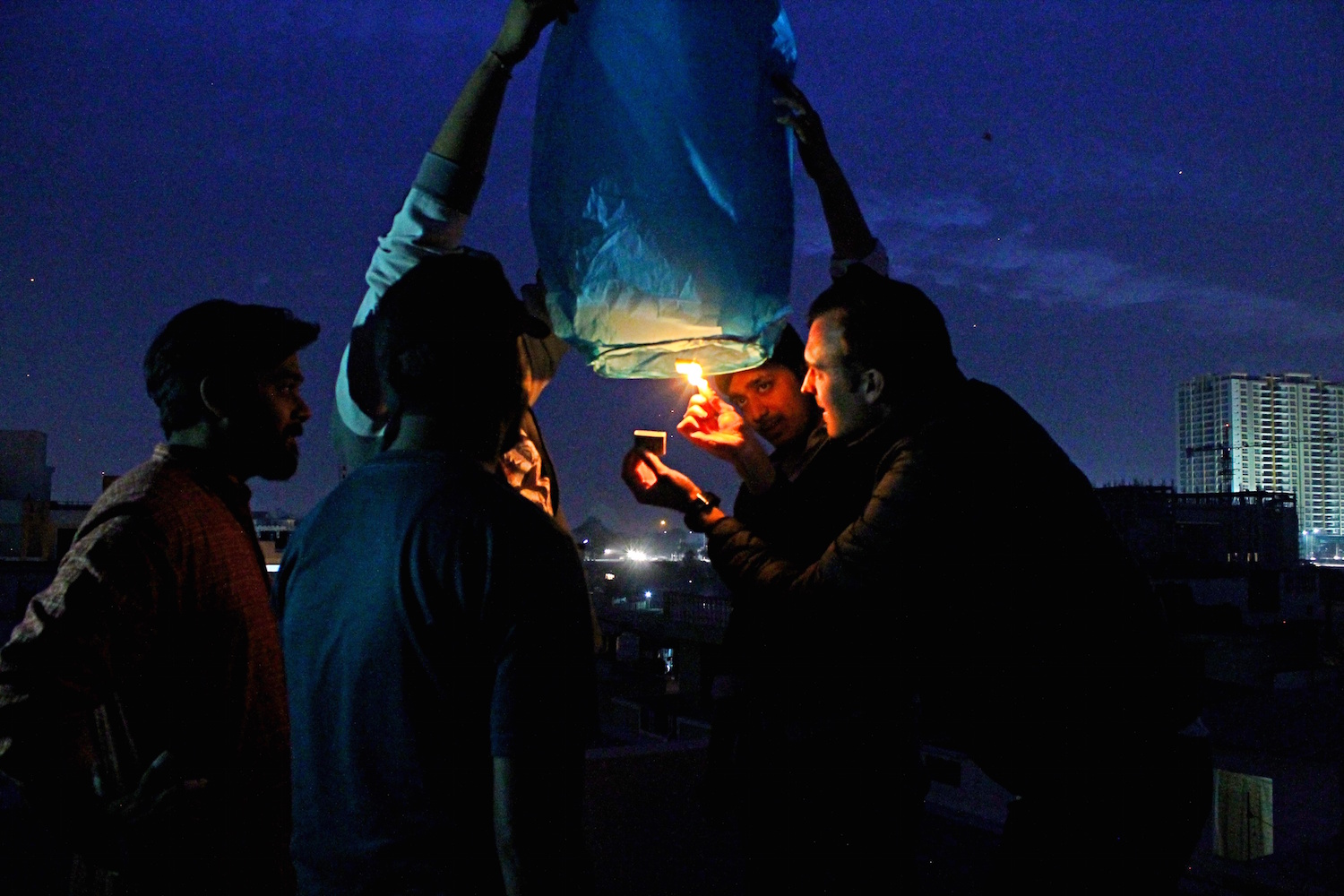 I only have two more weeks in India, and yesterday was my last day in Jaipur. This means I had to say goodbye to Saksham, Jatin, Shorya, and Ritu (as well as Cameron), who are all staying in Jaipur (or, in Cameron’s case, traveling South). My goodbyes to all of them were a bit rushed unfortunately. Saksham was the first friend I made in India outside of work and he’s the reason I have met at least half the people I have met in India. So, while our official “goodbye” didn’t seem formal enough, our last weekend, standing on his roof watching thousands of kites and thousands of lights, seemed just right.