“Don’t wear all white…one bucket of water on you, and you’ll be all transparent as naked.” Rohit warned.

Six years since I first learned of India’s most colorful holiday, Holi, and I stood at the cusp of finally celebrating it. Years ago I remember thinking how interesting celebrating in India might be and quickly dismissed the idea. I had plans to settle down in the US, when would that ever allow me time to travel to India during the spring?

“Put some oil on yourself,” he texted. So many last minute details I never thought of. Kelly and I had already discussed the risks posed to blondes on Holi. For some reason I didn’t think the powder would stain. Ever the optimist….

The morning of Holi I woke up with more excitement for a holiday than I had in years. I didn’t have any proper oil so we greased up using moisturizer and a particularly oily hair spray that I have which leaves your hair looking wet the entire day if you use too much. I even lathered it on my face, ears, and chest as well as my hair. In retrospect I’m not sure it helped.

Rohit and Pranav came to my apartment first. After greeting everyone I went to join the two boys on the balcony where I was bombarded at the door with powder to my face. The war of water and powder had begun. The five of us battled, the scuffle only gaining momentum when Sukrit and Puneet arrived. In the short process we managed to become streaked with colors and break a plastic bowl. Rohit expressed his disappointment that the colors did not stick to the three of us as much as he had hoped. They decided darker colors would be needed to properly color us. 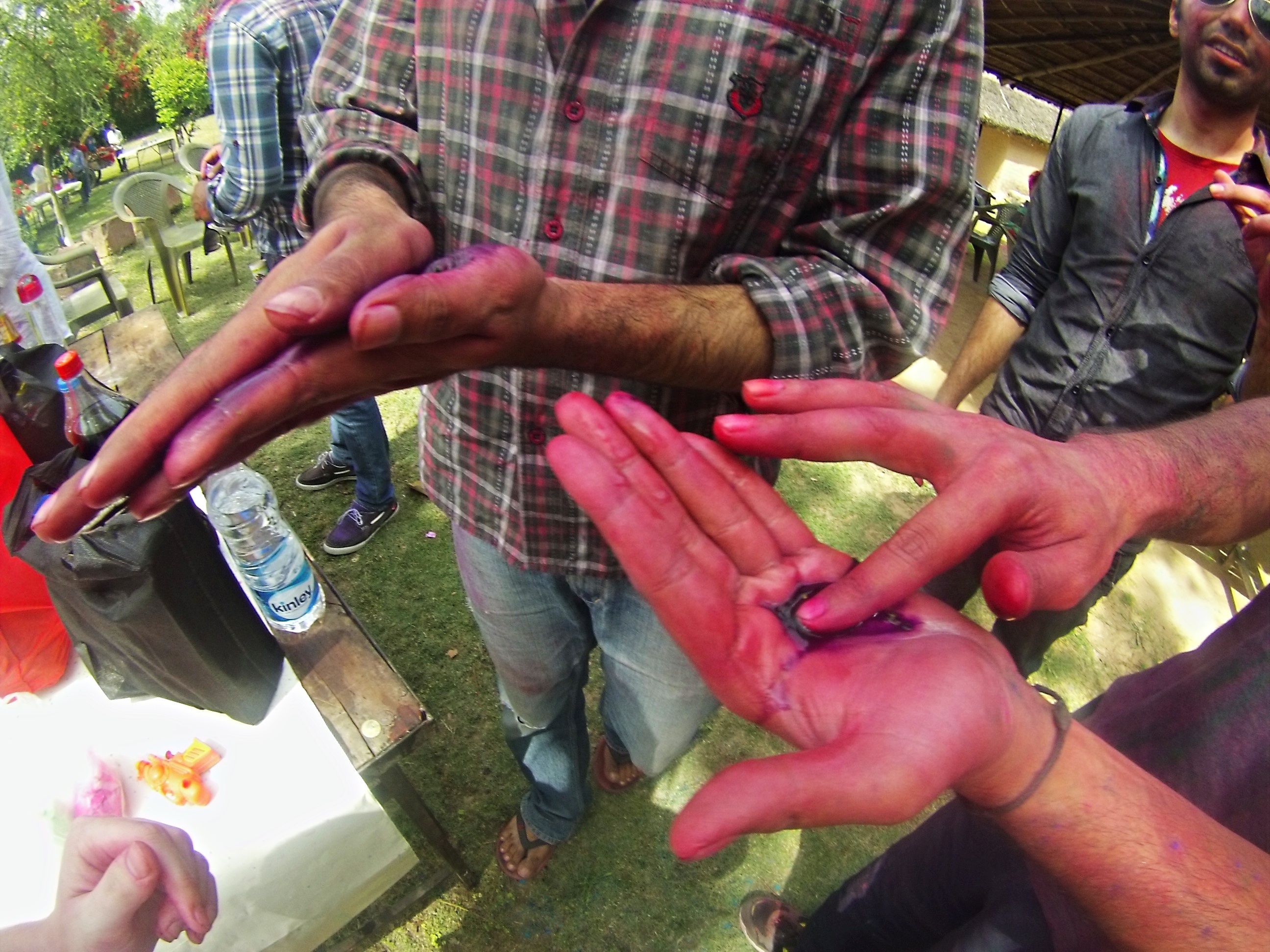 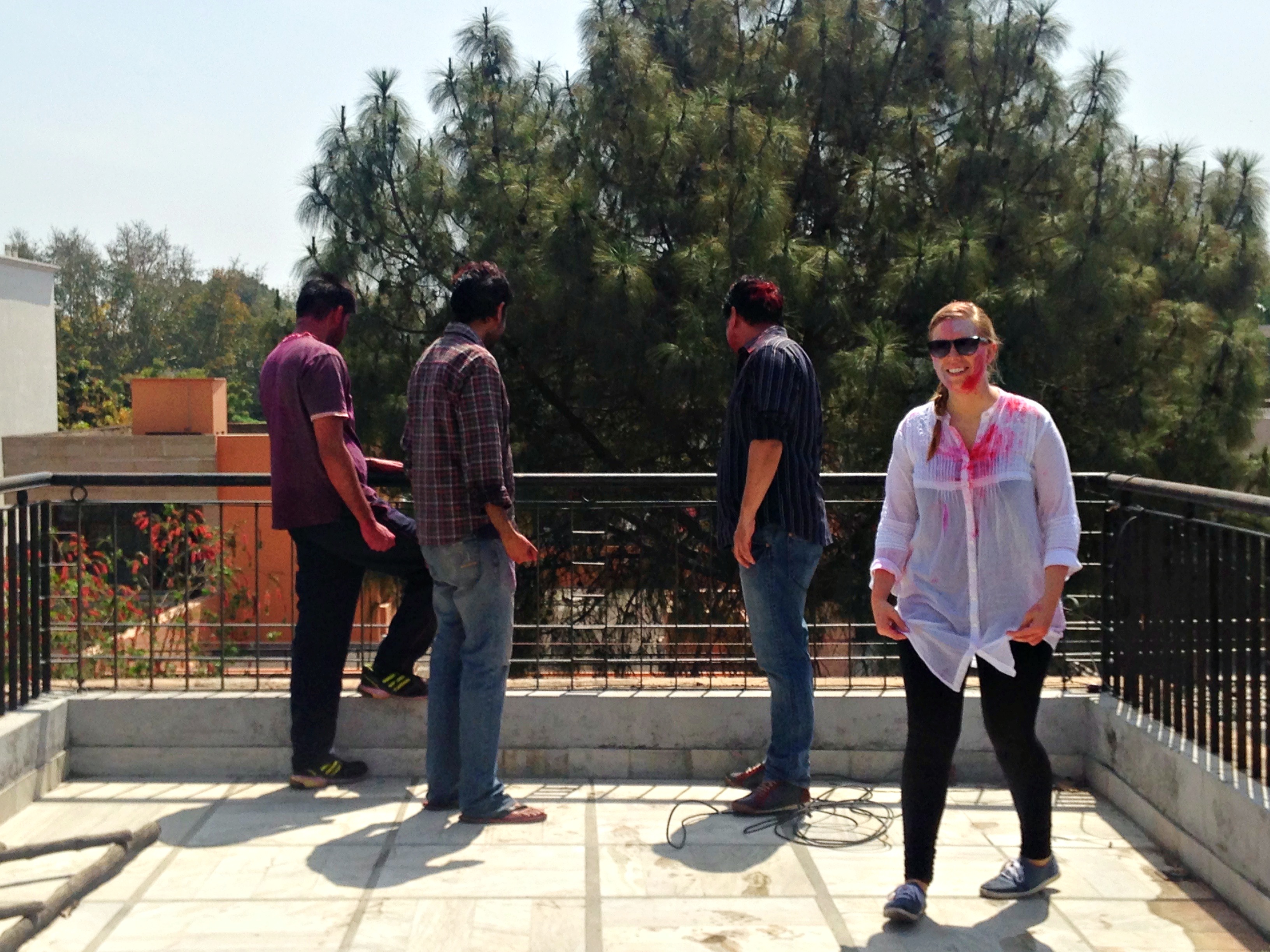 By the time Gurvi’s car pulled onto the street we had almost entirely exhausted our packets of colors. Only a quarter of a handful remained. So Pranav climbed onto the roof in order to launch a surprise ambush.

We sat in old towels and drove around Chandigarh for an hour or so. People on motorcycles blotched in greens, yellows, pinks, and blues sped through the street. Bright red handprints and splotches of pink colored cars. Children hid behind the safety of their fences and sprayed passersby with water guns. Pickup trucks hauling young men brandishing water guns raced around street corners. 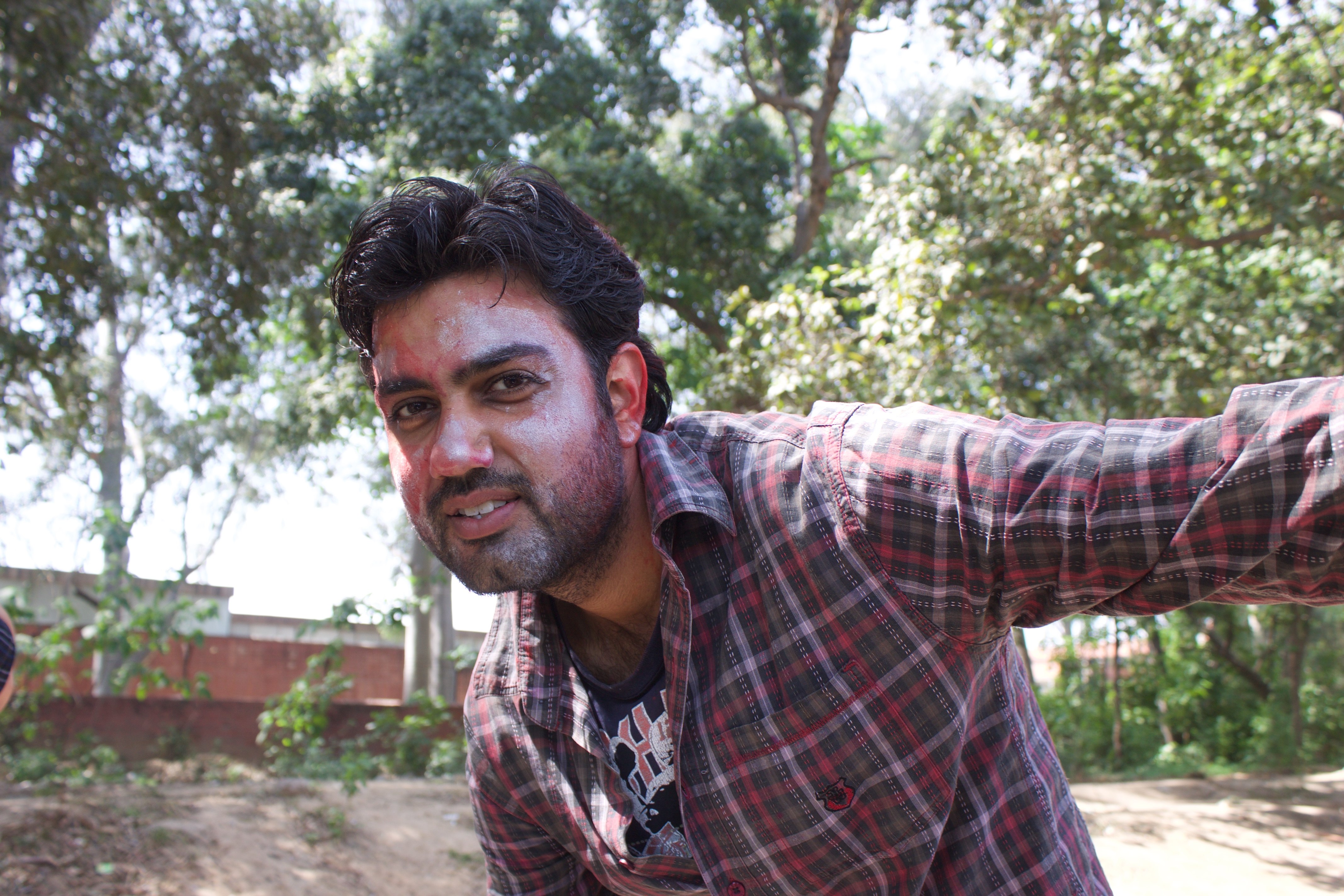 A number of rowdy youth gripped eggs like grenades, waiting to throw them into the windows of unlucky passengers or on the windshields unsuspecting motorists. Rohit protectively told us not to exit the car, worried we would be barraged by eggs or mischievous young men hoping foreign girls wouldn’t understand the difference between playing Holi and “accidental” groping.* In the market a number of girls had remnants of egg yolk dripping from their heads.

After procuring more alcohol, food, and baggies of colored powders, Puneet drove us to his brother-in-law’s farmhouse outside of the city. A man sat at the end of a dirt road with a guest list charging 500 rupees per couple. Continuing up the driveway a house peeked out from the trees. Beyond it opened an elevated area characterized by a sizable gazebo encircled by tables and people dancing, drinking, and socializing, each uniquely spotted: a smudge of green across the forehead, yellow freckles on their neck, a general mirage of pigments staining their hair, skin, and clothes.

We barely had time to place our bags on our assigned table before Rohit began mixing pigment with water, creating an elixir of sapphire, and trapped my face in his hands until I looked like a blueberry. 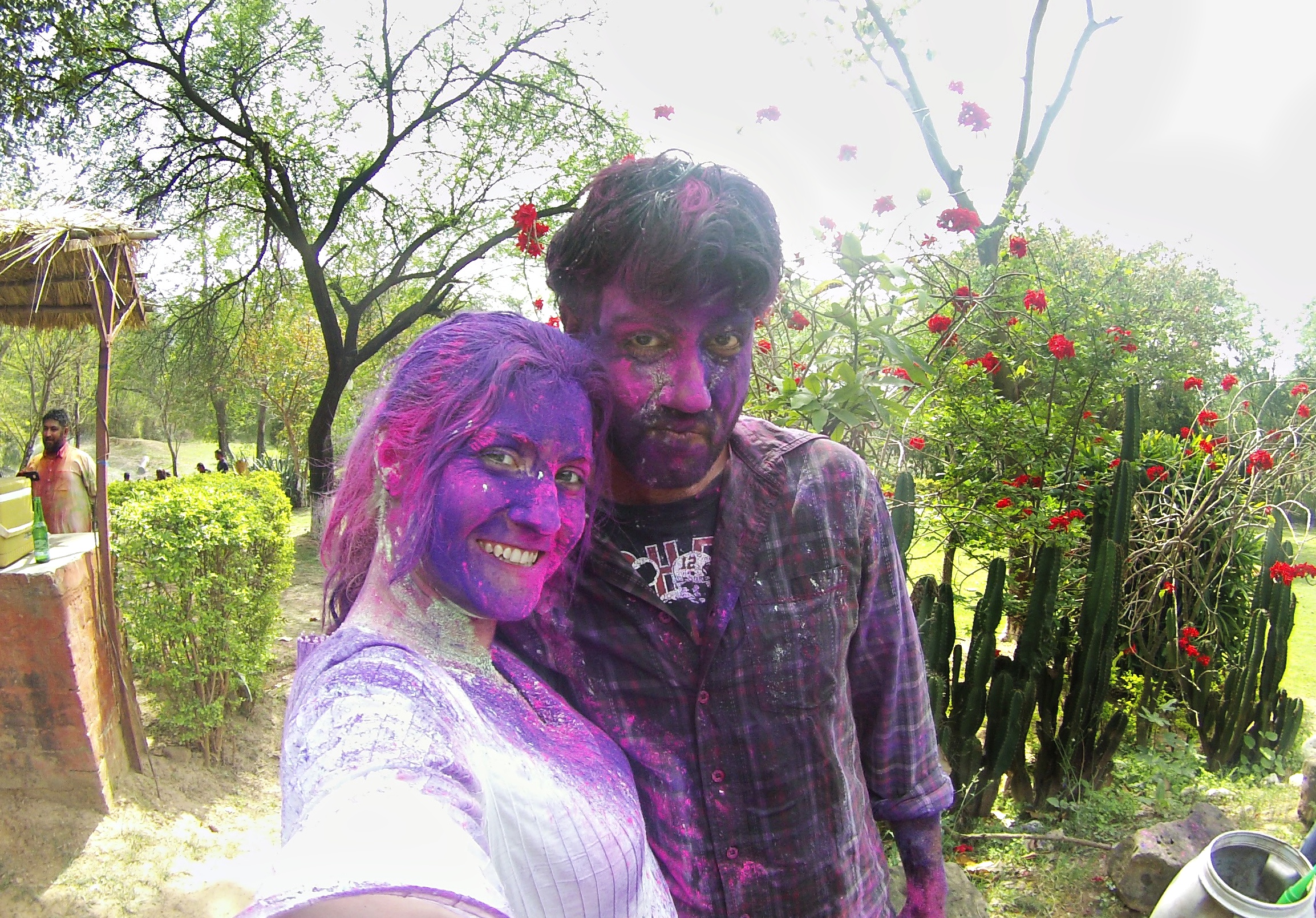 Another combatant, drenched in the anonymity of color, surprised me with a face full of purple powder so thick I couldn’t see and it went up my nose. Once again, the war began…

At some point Guvi held Rohit down so I could pour an entire bag of pink powder into his hair for my revenge.

After the eight of us transformed into unrecognizable colorful cartoon avatars of ourselves, we ran around in the sprinklers, dumping water and more color on each other. 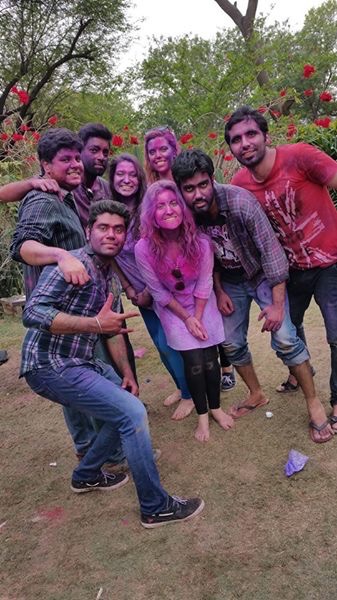 The rest of the day involved hours of dancing, water guns, and drinking. The organizers had hired a man to make sugar cane juice and also had a bowl of bhang (a legal drug in India) sitting out for people to drink as they pleased. Kelly had a bit less than a glass after my warning. It can be made to be quite strong. Rachel and I had a few sips each. Pranav had a full glass. No one felt much from it, but in my opinion feeling nothing is far better than feeling too much like my experience on Shivratri.

By the time we left, our alcohol supplies had suffered a sizable dent and our bodies were exhausted.

We drove home, blasting music and all singing along drunkenly from the back seat. I honestly could not think of a better way to spend the holiday. While I know places like Mathura offer a more intense experience, but we preferred enjoying amongst friends in an intimate and safe* atmosphere and seeing how the average person might celebrate.

Result: One of my favorite days I have spent in India. Plus, a new purple dye job. It’s been a month and my hair still is streaked with pink

*Holi is not considered a safe holiday. Many families will not allow their girls to go out alone and there are many men roaming the streets, unrecognizable from the color and high on bhang who will grope girls unabashedly. It is for this reason, amongst others, that sharing the holiday with people we trusted and not in a public street party were all the more important to me. I didn’t want to ruin my friends’ holiday through molestation or eggs thrown on us.