How does one celebrate their birthday “Indian style?” 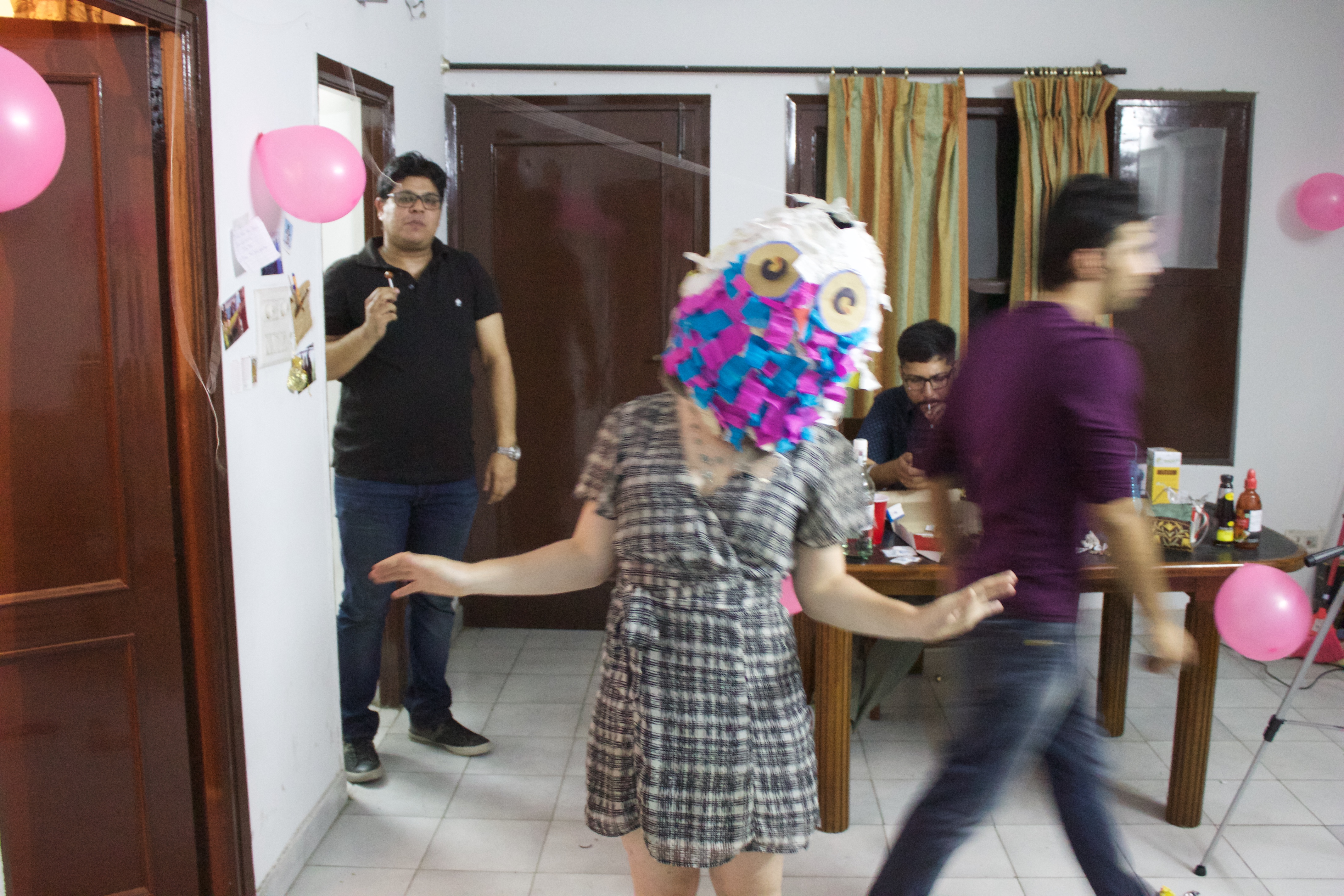 First, I wanted to go dancing since I haven’t been clubbing in awhile. However, knowing that no one would probably be free until 9:30 pm and then between pre-gaming and dealing with the new law closing all the clubs at midnight in Chandigarh, the time restraint seemed stressful.

So, as usual, the night morphed into people coming to my house to drink. Since I wanted to do something special, I decided to attempt to make momos. Then, somehow, I decided I really just had to have a piñata. Apparently turning 26 and officially move out of my early 20’s is taking an emotional toll and I’m reverting to childhood. So the weekend unfolded something like this:

(Afternoon):  Traditionally, in India, the birthday person is expected to give everyone else a treat for their birthday. I had a huge list of things to buy; I even skipped my visa extension appointment. I wanted to make momos for everyone so I bought vegetables, momo spices, sauces, and chicken ( I forgot flour so Priya had to do an emergency flour run at the last minute). I took a break after getting overheated in the 109F heat to drink some water and finish the piñata Ashveer and I had begun making the night before.

Then I went to the store to buy candy (I couldn’t find an actual bag of candy so I just bought a lot of little 1 rupee pieces from the corner shop). As I dumped a hundred pieces of candy in my purse I told the confused attendant that it was for a party. “Ah! Children’s party?” He asked. I didn’t know how to say, “no, I’m turning 26 and somehow the symbolic shift from mid-20s to upper-20s and not having a job lined up after this and no desire to get married or have children or buy a house or do anything adult-like is causing a small existential crisis” in Hindi. So I just said, “hanji.” (yes sir)

I also went through the market toy stores and bought a few little cars and bouncy balls. None of the Indians had played piñata before so I wanted it to be exciting.

Then I bought a bunch of alcohol and more mixers. There’s my adult deed for the day.

Priya and Ashveer came over and helped me finish the piñata and begin cutting everything up for the momos.

Evening):Everyone else arrived around 9pm. The momos weren’t even close to ready and due to some miscommunication we scraped the idea of making them at all and instead ordered some pizzas, simply refrigerating the dough and chicken filling. Because following something through the completion is for real adults. (Also a special shout out to Priya who spent an hour helping me cut everything and didn’t even get to try any momos….)

We all drank on the balcony for awhile. GK had to leave early but still gave me a present (which was really sweet especially since I wasn’t expecting anything).

Then I forced everyone to crowd into my only AC room to sit around the bed and play Circle Of Death (because I am mentally still 21). For those who don’t know it, this is a game in which you sit in a circle and in the middle there is a circle of cards. Everyone takes turns drawing a card and each card (Ace, Three, King, etc..) has a different rule attached. When people mess up they have to drink. There are a few different versions of this game. It is also referred to as “kings,” “king’s cup,” or “ring of fire.” Here’s a link to one version if you need an idea. This game gets played so frequently in US college campuses that most people find it pretty boring. But, since traveling, I have found that when you get a group of people who don’t know the game, it sort of develops a life of its own. 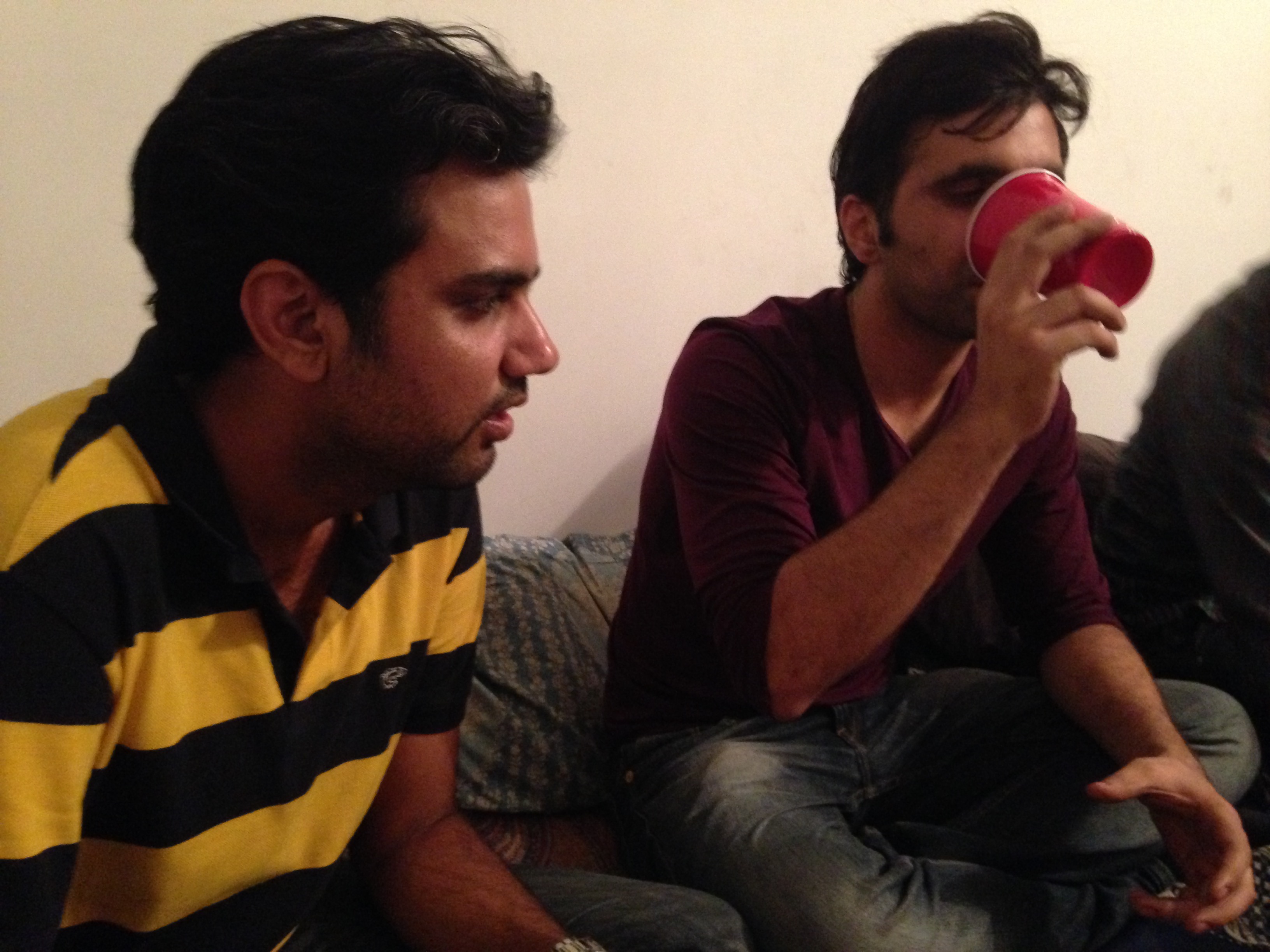 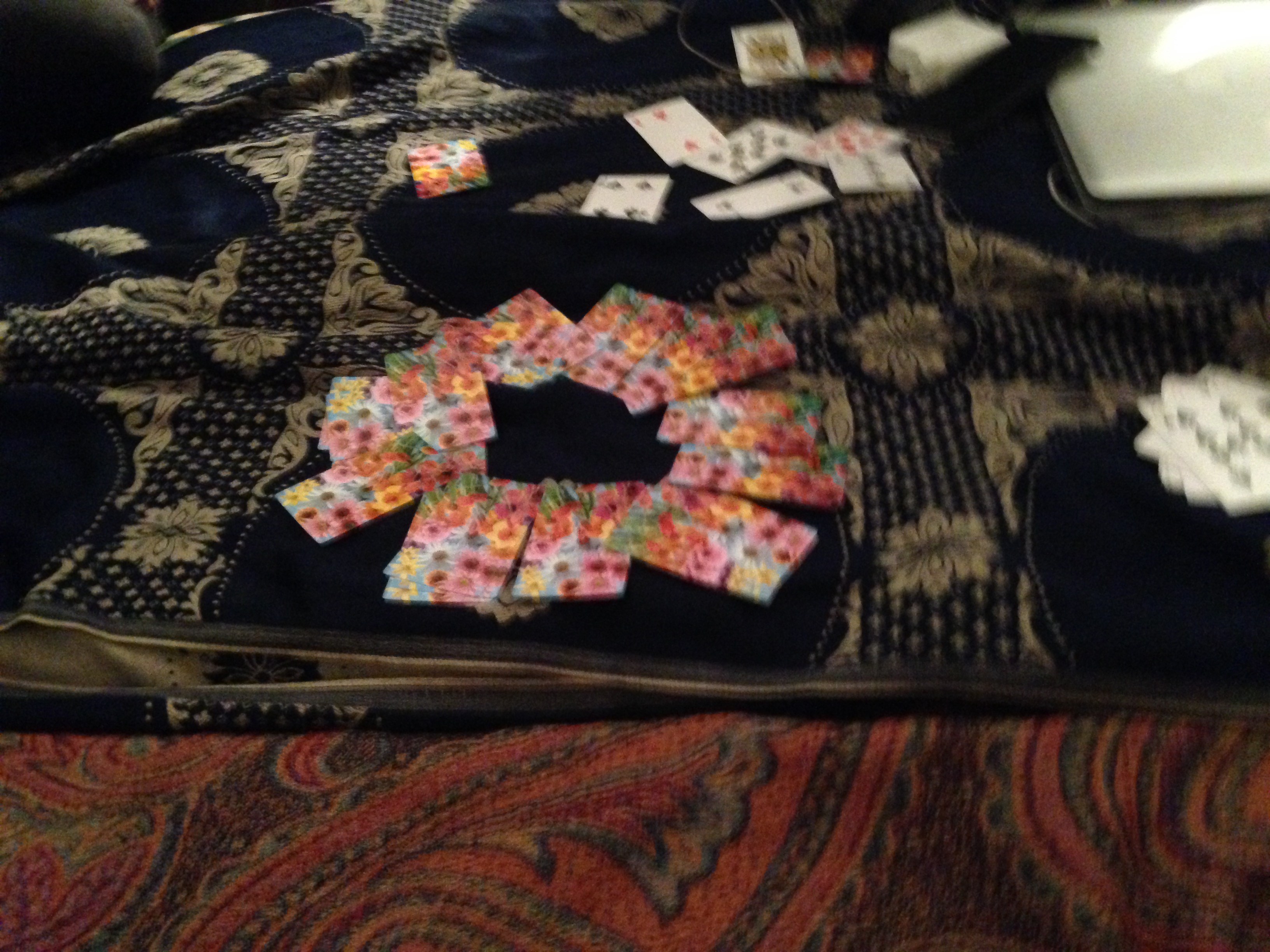 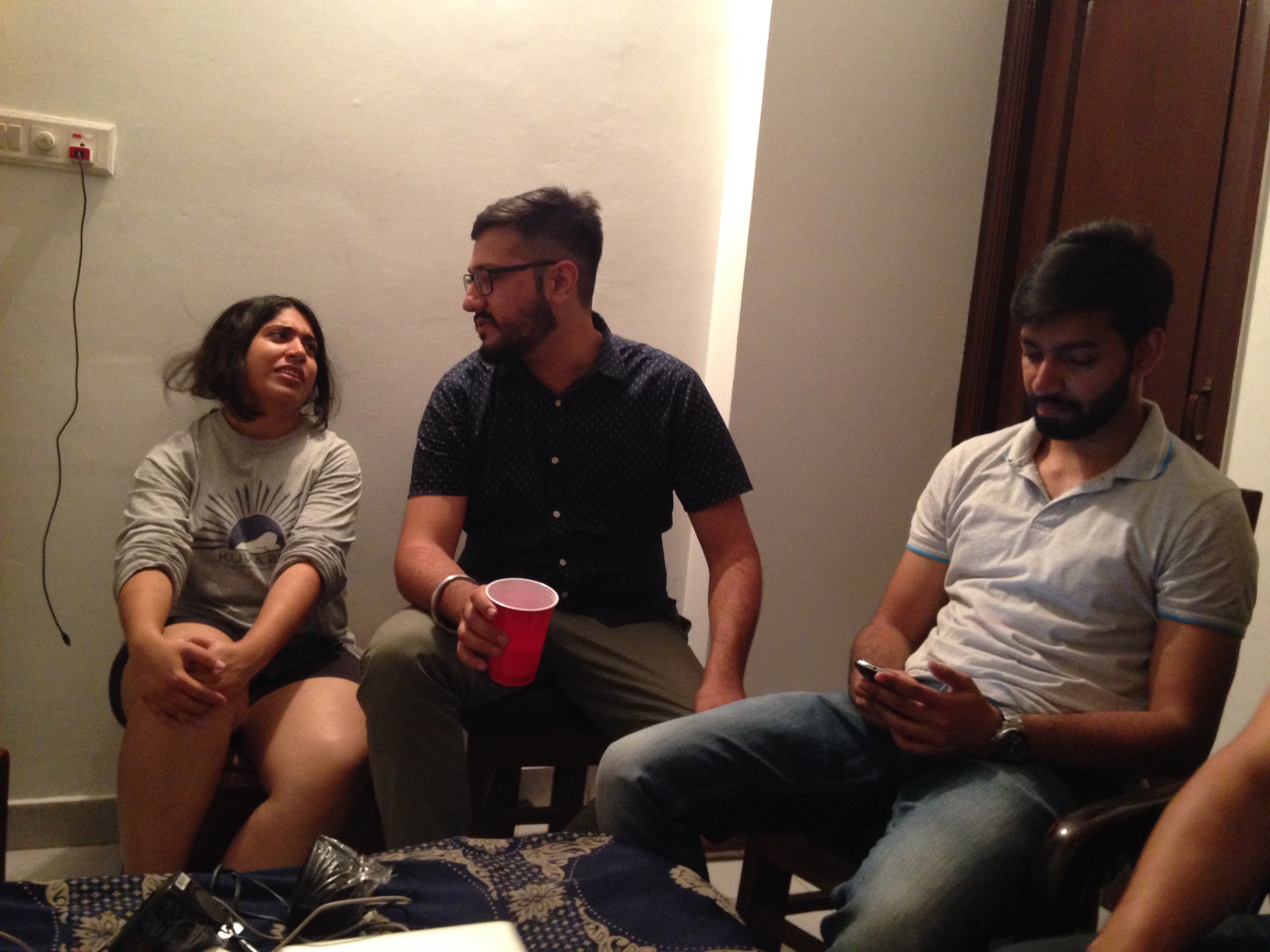 In this case, the Indians kept creating new reasons why they each needed to take a shot (usually when I play only one shot is taking the entire game. By one unlucky person). It got to people taking shots anytime anyone broke a rule (which was every few minutes). Fifteen or so shots later, a rule was invented that anytime one guy drank we all drank for the remainder of the game (which I tried to veto on behalf of everyone’s sobriety). Another rule was created that no one could use the bathroom unless he went first. Someone tricked their drunk friend into taking shots for them. Ashveer kept lying about the card he drew just to chuckle to himself when we all did the wrong rule. The hilarity of the situation is difficult to articulate so I’ll just say that, basically, chaos ensued, everyone took way too many shots, and got far too drunk.

The next thirty minutes isn’t even appropriate to write on the internet.

Saturday, June 4th (midnight): Piñata time! I’ve reverted from 26 to 21 to 6 in a few hours. I got blindfolded first since it was my birthday. And twirled around so many times that I had to use the wall to figure out where I was while everyone shouted fake directions at me. I did manage to hit the piñata. Which fell off the weak string I last minute used to tie the thing on my doorframe. I didn’t make enough layers of papermache either so it cracked after my first little whack with the cricket bat (we used a pink, plastic cricket bat because this is India and who plays baseball?) I made Rohit go next who also hit the piñata and made it fall off the string (again). At this point it was broken enough we just decided to grab the candy. Two little whacks and the owl was dead. Now I understand why this is a children-only game.

We then took turns wearing it as a mask.

Traditionally, in India, midnight of the birthday is celebrated with a cake cutting, shoving said cake in the birthday person’s face, and then that person is held up while people take turns kicking the victim (I don’t think they do this to girls though). They then each feed the person a bite of cake. No one kicked me (even though I happily kicked them on their birthdays). But they did shove blueberry cheesecake in my face and fed me. 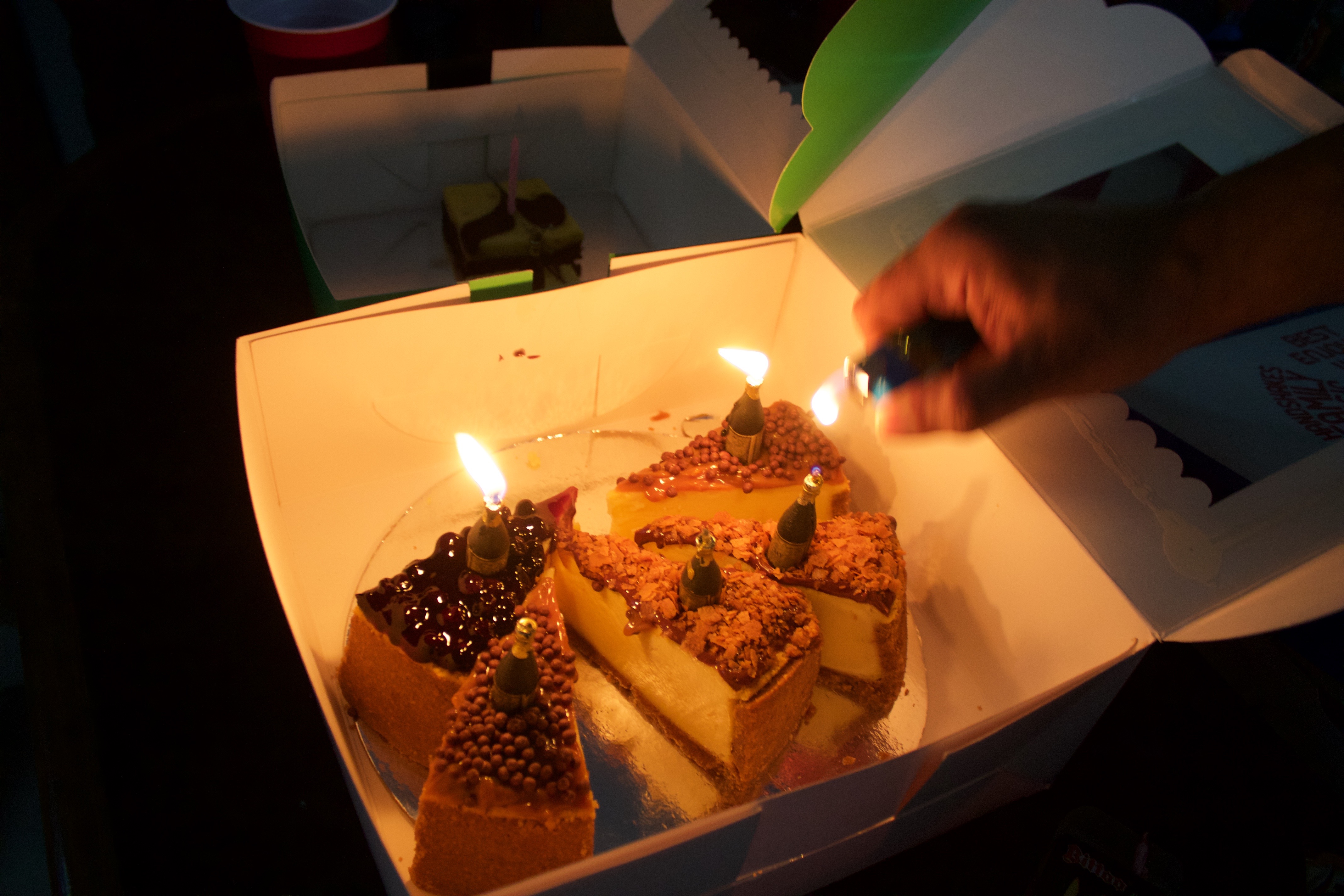 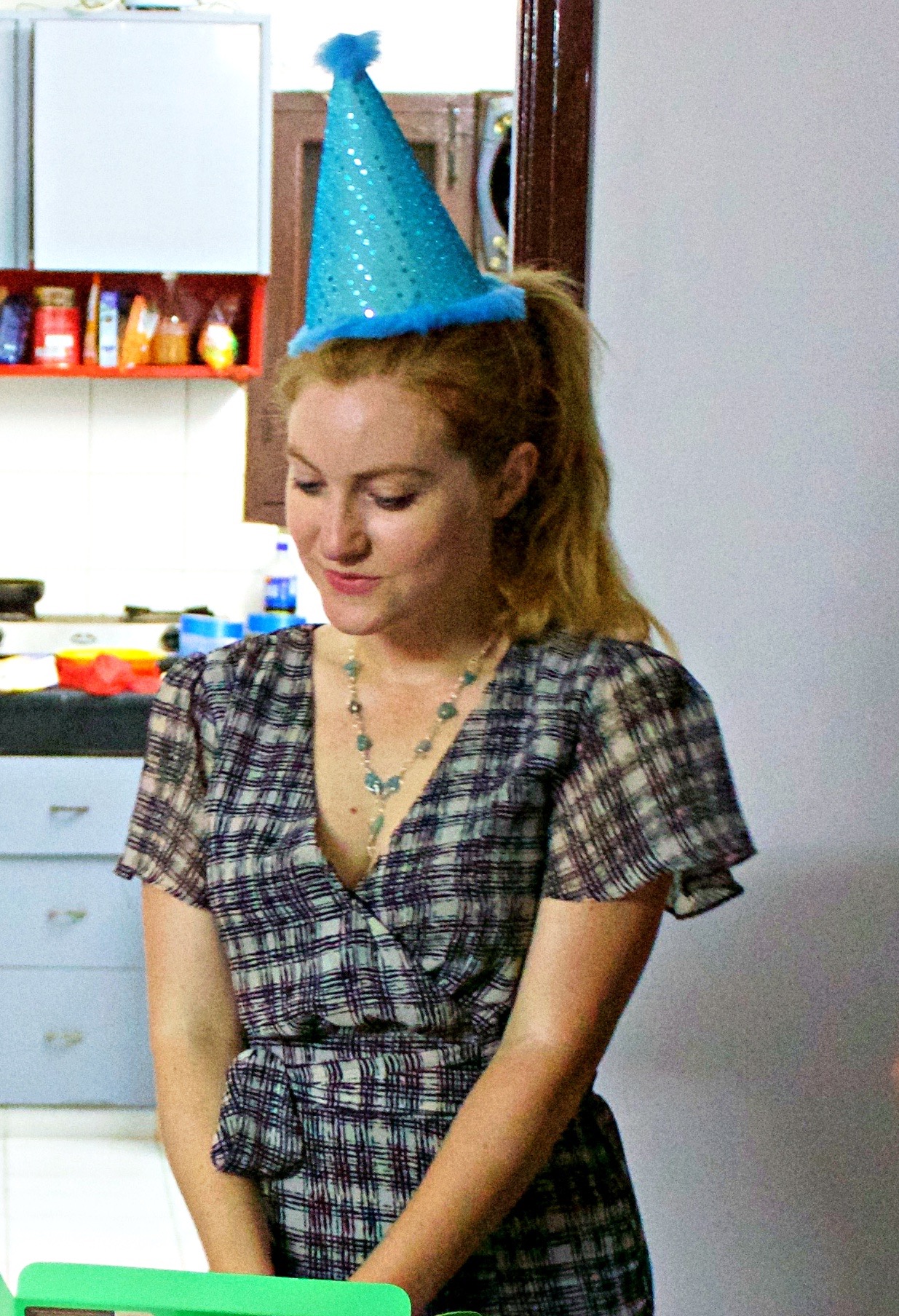 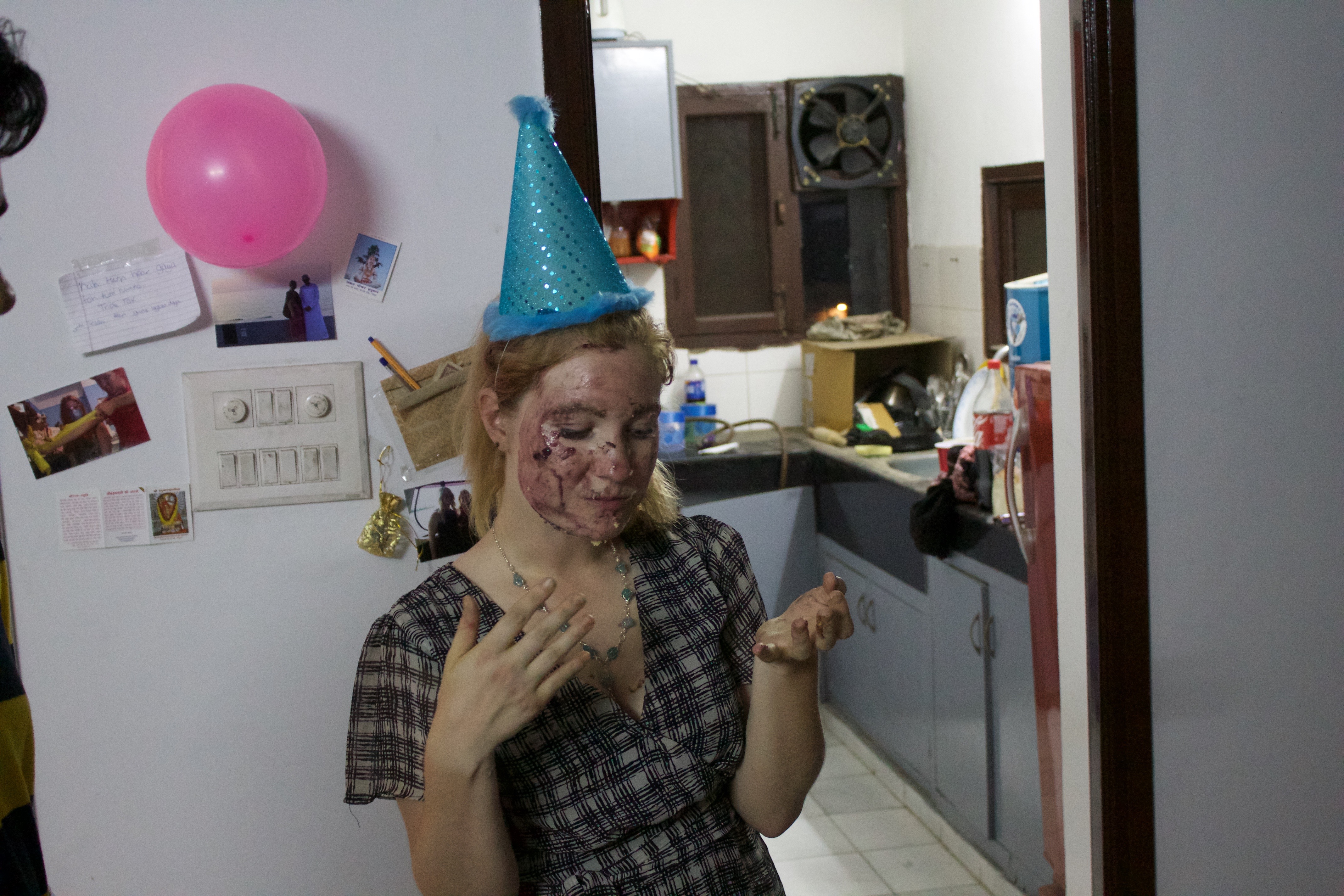 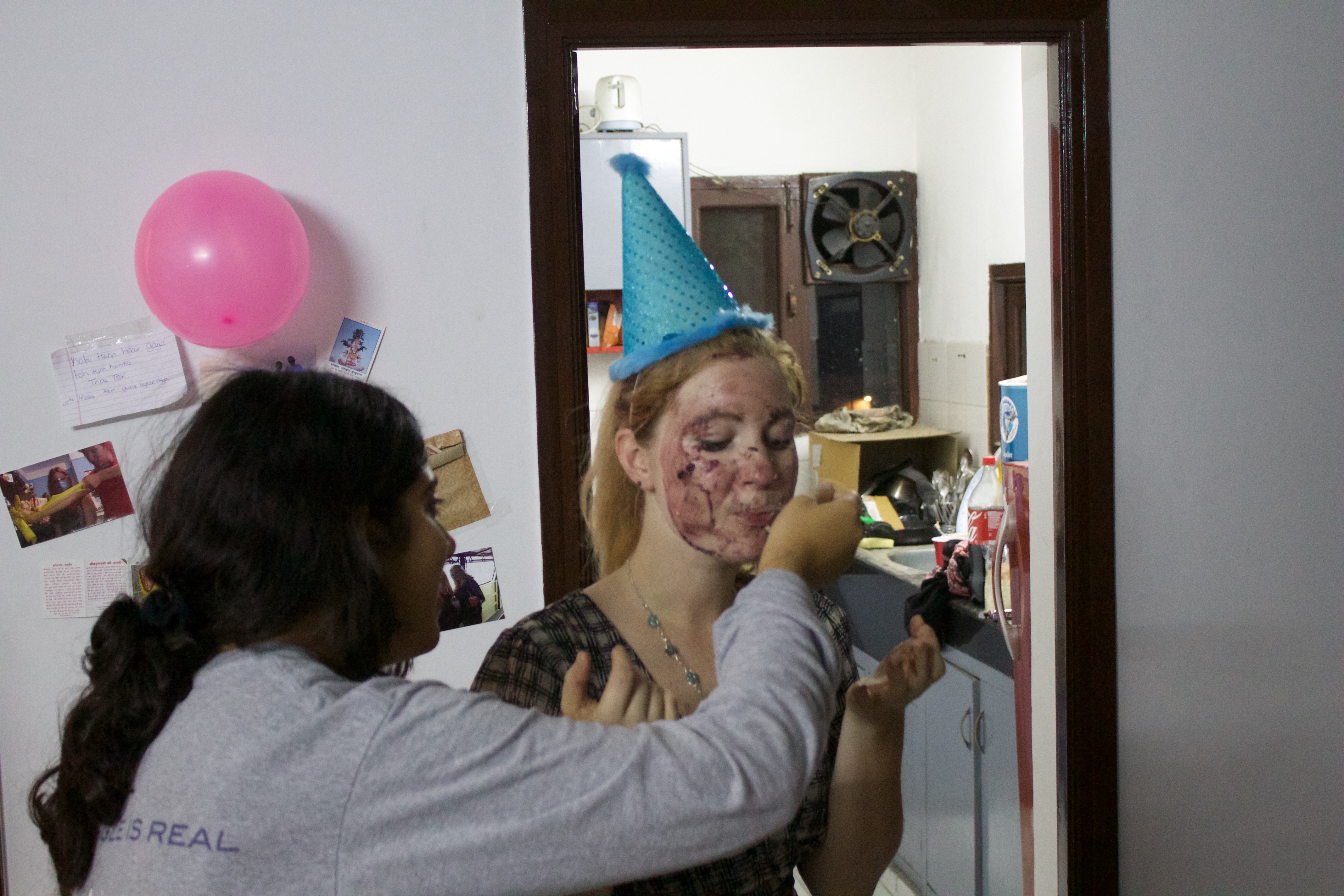 After indulging in some very good cheesecake brought by Priya, most people left. Rohit, Pranav, and Sahil stayed behind another hour or so and we played cricket in my house until around 2:30 am.

By 3am I was pretty satisfied with the way things had gone for my party. And honestly, it’s the juice of it. But somehow my birthday weekend just managed to continue through Sunday.