I don’t go to the movies very often. I don’t even watch them often in my house. Usually, I just turn on Netflix to put myself to sleep or while I am editing videos, cleaning, or doing other activities. However, about a year and a half ago my mom took me to an upscale theater with oversized plushy seats and fine dining service. We liked the theater experience so much we decided to go back and see “whatever” just to go.

Our “whatever” movie was Arrival. If you haven’t seen it, you should. I don’t usually like alien movies but this wasn’t the normal “kill the aliens and save earth” plot. It touched on subjects I think about a lot— communication, language, time, and perception.

The movie explores a well-known theory in linguistic circles, the Sapir-Whorf hypothesis. I’m not a linguist and I’m not going to attempt to get into the nuances of it, but essentially this theory states that our language influences the way we experience and understand life. It influences our perception of the world.

One Year of Spanish

It’s been a year since I took my first Spanish class in Argentina. My goal was, essentially, to be where I am now in Spanish: far from perfect, but conversational and comfortable living in it. In a wonderful “full-circle” moment, my first Spanish teacher contacted me to help write an article about learning Spanish for her new website. It’s not done yet, but I’ll post a link to her website when it is.

I have a highly emotional relationship to languages. Unlike English, I remember how and when I learned certain words in Spanish. I learned the word “kite” laying in a park, I learned the expression regalarme un beso (give me a kiss) from an obnoxious motorcycle taxi, and I learned the word for “mud” while sinking in it on a mountain in Colombia. So while speaking Spanish, my head is firing off memories left and right and I feel myself becoming emotional about very strange vocabulary. A word like “t-Shirt” might spark a number of funny and sad memories.

The same thing happened back when I could speak Arabic (and when I say “speak,” I mean string together some sentences with a bad accent and buy chicken). After spending a summer in the Middle East, my relationship with the language was so emotional I wanted to stop speaking it. Every word sparked something wonderful and painful. Imagine if you spent a summer listening to a song with your ex-lover and can’t listen to it anymore after the breakup. That’s essentially what happened with Arabic.

Has this happened to anyone else or am I just incredibly oversensitive?

This isn’t what the Sapir-Whorf hypothesis is. The theory is less about emotional connections to experiences and more about how we learn to express ourselves through language which shapes how we view the world. I recommend this Ted Talk one of my students sent me over the weekend.

For example, importance, for some cultures, is placed on directional accuracy. While in English I may tell you to turn right at the river, another language may use “North-East.” If you use precise geographical orientation for everything, your sense of geographic orientation is going to be significantly better than someone who doesn’t have this in their language.

A few years ago, a friend gave me a book about a linguist who goes into the jungle of Brazil and works with an isolated tribe to understand their language. The language structure is incredibly complicated and unrelated to any other known structure. He notes the lack of a counting system in the language. After a certain number, one simply uses “more” (or “a lot,” I can’t remember). Counting may seem like something natural for us, but we have to learn the concept. 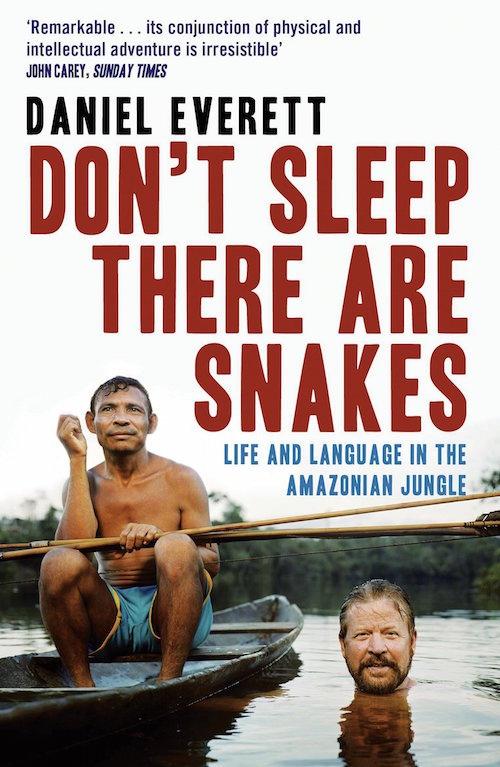 Don’t Sleep There Are SnakesOne of my favorite expressions in Spanish is “te quiero.” It does not hold the weight of telling someone, “te amo” (I love you) but it is more than telling someone “I like you.” It’s perfect for those first months in a relationship when you want to tell someone you have strong feelings but aren’t reading to break out “I love you.” If we adopted this into English, maybe we could take out some of that early relationship pressure of moving from “like” to “love.”

Or, l’appel du vide, “the call of the void” in French. This one I saw here and I haven’t verified past a quick Google search, but knowing it brought me some comfort. I’ve never engaged in self-harm or suicidal thoughts, but I’ve had to move away from open windows, balconies, cliffs, and the railing of boats on a number of occasions when I felt a small urge to jump from high places. I decided I was crazy until I heard this expression in French. The fact that it is common enough in people for someone to name it made me feel like perhaps this was just a typical morbid curiosity and nothing serious. Naming a feeling or an experience connects it to the human condition. It can normalize something.

Researchers have come out with all kinds of studies linking bilingualism (or multilingualism) to better cognitive ability, a decreased risk in Alzheimer’s, and increased creativity. In general, I think it opens you up to thinking about the world differently and how you communicate. You think more about what you say, how you say it, and what you are trying to express.

My Spanish isn’t perfect. I can’t harness and manipulate the language like I can in English. But I think it has meant developing more patience. I think more before I speak, even in English. I also misunderstand people more, which means appreciating their patience with me and taking time to clarify things.

In Arabic, I used to get frustrated because I felt my inability to express myself stunted my personality. I didn’t feel I could be me in Arabic. But in Spanish, I sometimes like myself better. I have to cut out the extra fat, but it means having to be more honest at times. I’m more intense. I can’t always be flip or vague so I go to the other extreme.

So here’s to my year in South America and a year learning Spanish and to the new adventures to come as I wrap up this continent.