Skip to Content
Home Asia Thailand Thailand: Then and Now

A traveler I met in Nepal back in 2016 reached out to me last week.

“Do you find when you travel something pulls you back?” He asked. “You keep going back? What is that?”

Ironically, yes. I’ve been thinking about it a lot recently. This has been the first year since 2007 in which I haven’t visited a new country. I’ve been to new places, of course. So many new cities! But new countries? Zero.

Instead, I’ve been returning to places I’ve been before: China, Vietnam, U.S., Thailand, India (twice). My reasons for going back vary. India for weddings. Vietnam for medical purposes. And Thailand? I’ve just had an inexplicable hankering for months.

When I go back to India, I’m always prepared to get smacked in the face with a good bout of nostalgia. After all, it was my home for the most transformative year and a half of my adult life.

But Thailand? Eh…I really didn’t think I’d left anything there to find. I was chasing pad thai and sun, not memories.

In March of 2015, I bought a ticket from Chicago to Bangkok, mere days before the flight took off. I dare say it was one of my more spontaneous purchases. I’d finished up my grad school exams early, leaving me with an unexpected 2.5-week free gap.

My last year of graduate school was dominated by grappling with unexpected weight gain, massive insecurity about my future, and the overwhelming need for every exhaustive moment to be meaningful and adventurous and fun! It was draining.

Some girls deal with heart-shattering break-ups by drinking wine and eating ice cream with their friends, I decided a more mentally unstable “let’s go on a lot of boring dates and take a lot of sporadic trips” would suffice. I let my spontaneity take the wheel of my 4-door armored depression tank and bought a last-minute ticket.

I’d like to blame this kind of behavior on depression, but at this point, I’m realizing its just one of my more dominant character traits. And probably why I’m still single…

Anyway, I had a blast. Seriously, I had so much fun. Despite the good times, 29-year old Gwen had no problem snubbing her nose at 24-year old Gwen and largely dismissed the experience as being devoid of any real meaning.

Going back this September, I remembered why I had so much fun. It wasn’t the partying or the beaches, it was that I met all these really cool people from around the world from vastly different backgrounds.

Ok, so that’s backpacking culture in a nutshell. It wasn’t the first (or last) time I met people like this, people doing their “own things.” People who aren’t working 9-to-5 jobs or worrying about their 5-year plans. People who see success with vastly different eyes than what I’m used to.

But I needed the reminder that a different lifestyle wasn’t just possible, but other people were living it. I distinctly remember thinking, “Oh, thank God. These people exist and they are out there.”

And that thought gave me a lot of strength. It made me feel a lot less crazy about considering running through life by my own rules, instead of following the path I’d laid out for myself in college.

Because in grad school, I often felt like I didn’t belong. My whole life I was this sort of shy, nerdy girl who got good grades and wasn’t confrontational. Life was a single trajectory of college, grad school, Ph.D., job, life, etc.… Being smart needed visual proof: a fancy placard for my job title or a Dr. in front of my name.

But by graduate school, I didn’t want that anymore.  I felt I was working toward a goal that wasn’t mine.

Before September, I hadn’t thought about any of this in years. I’d forgotten how much I had needed that first Thailand trip and how lonely I had been in Chicago.

Obviously the trip this September was good. I got tons of sun, I ate the best blueberry pancakes I’ve ever had, and also enjoyed a lot of pretty sunsets, beaches, and hiking.

I drank some whiskey and did a photoshoot on a bunch of gigantic fruit on top of a mountain.

And explored abandoned buildings (which if you know me at all, you’ll know this is one of my favorite hobbies). 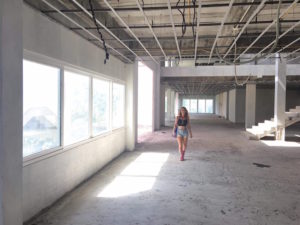 But more than anything, it was validating reflecting on how much has changed in four and a half years and yet, I am exactly where 2015 Gwen would have wanted to be. It’s a little daunting having recently quit my office job in China to piece together freelancing and doing the “writer” thing again, all while the big 3-0 looms on the horizon. But despite a lot changing since March 2015, my overall goals haven’t.

Thailand offered a nice “welcome back” to my slap-stick career path.

And seriously, you guys, those pancakes!