Skip to Content
Home Asia China Over the River and Up the Ladder to the Great Wall We Go: Huanghuacheng with Kelly

I was hoping to post a blog, “Return to India: My (ex-boyfriend’s) Best Friend’s Wedding” as the third installment of my “Return to India” blog series. However, I was far too busy during the wedding weekend dancing and holding onto my sari for dear life so decided to rely on the photographer to snap photos for me. That means waiting a while for the photographic evidence, so there’s an indefinite hold on those photos and that blog….

So for now, let’s talk China!

In the last two months, I’ve had whole 4 visitors come to visit me in China: My friend Kelly in March and then my parents and sister in April. Besides spending time with family and friends, my favorite thing about their visits was that it meant I was forced out of my comfort zone a bit to discover new, fun things in Beijing and China in order to entertain them.

Kelly told me after her visit that her favorite part of her trip to China was when we went to the Great Wall. I have to say that our Great Wall trip was definitely top 3 in terms of tourism activities I’ve done in China (The other two being when Antonio and I went to Harbin to see the ice village back in January and, more recently, my trip to Chengdu with my family last week *Coming soon!*). 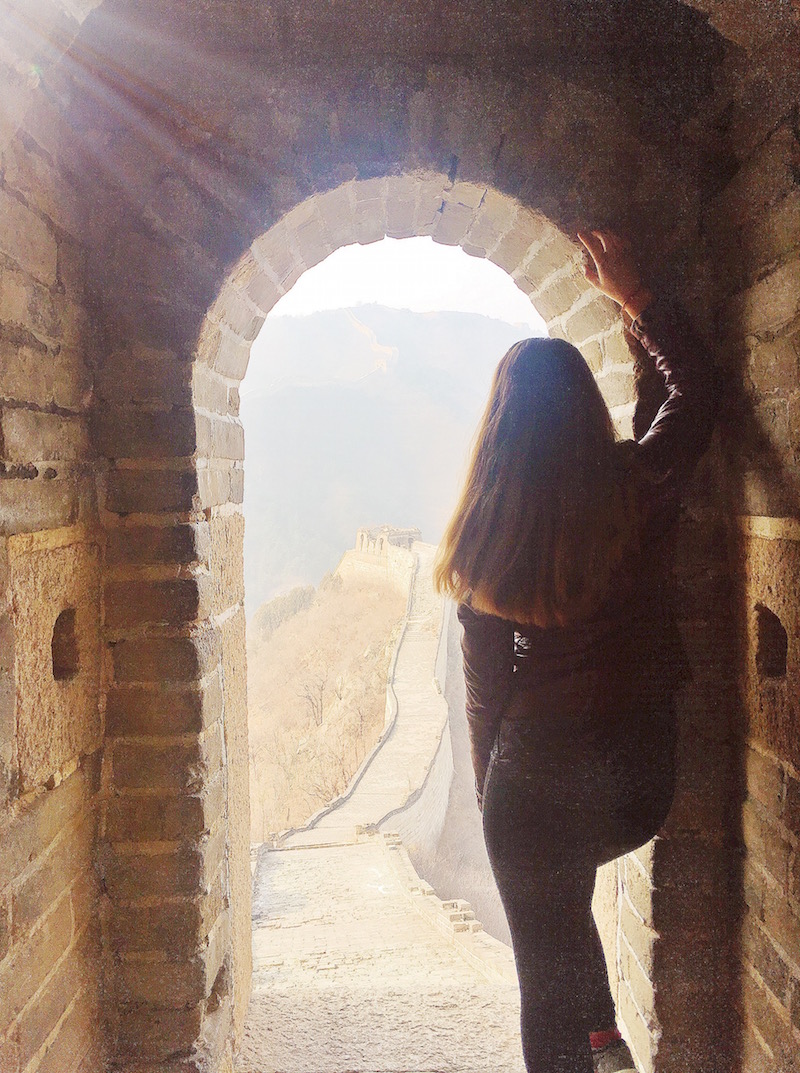 There are a few main places most people visit the wall from Beijing– Badaling (八达岭) and Mutianyu (慕田峪)– but I decided to take Kelly to Huanghuacheng (的图片) instead. I visited Mutianyu back in December with another expat friend from Brazil. I had a good time, but the place I took Kelly was far better in terms of adventure. In terms of ease and views, Mutianyu was superior (but we went in December when the pollution wasn’t as bad).

First, at Mutianyu you buy tickets at a ticket booth, walk by a lot of touristic stores selling overpriced knick-knacks and thingamabobs (and a Burger King), and there is a chair lift going up and a toboggan going down. It’s mostly restored. It’s good, it’s just very organized. You can see photos from my first visit  here .

Huanghuacheng, by comparison, is much more rugged. We hired a driver to transport us the two hours into the countryside. I found a service through wildgreatwall.com and added “Rick” on WeChat to organize it. It’s a bit pricey, 750 RMB ($110), for the private (non-English speaking) driver all day. However, this seems to be pretty on par with other prices I saw and I thought the service was good. Also, the only other way out was to take 3 different buses and no way was I attempting that with my level of Chinese.

After the 2-hour drive, the driver simply stopped on the side of the road by a dam. We got out, paid a random guy by a fence 10 RMB each (about 1.50USD) and proceeded to cross the dam. Parts of the lake were slightly frozen. On the other side of the dam there was another man sitting by a metal gate. We each gave him another 5 RMB each (Less than 1USD) and proceeded on a little path along the lake.

We walked up to the side of the wall and found a ladder leading up. So, Kelly and I climbed up this rusty metal ladder and through a window and ta da! We scaled the unscaleable wall. 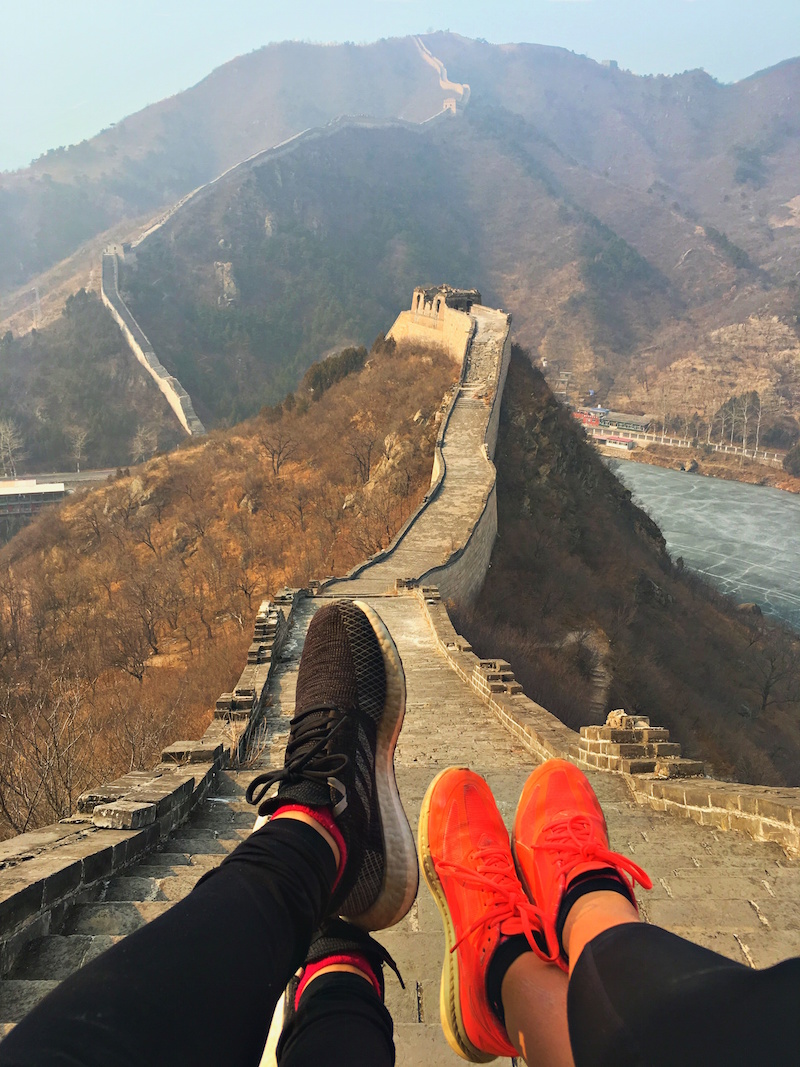 The wall was much more “crumbly” than Mutianyu but I loved the adventure and isolation of it. There was one part we had to go up on our hands and feet it was so steep. Calling those stairs “stairs” seems a gross misrepresentation as they were largely reduced to pegs. I’m also glad I’ve been going to the gym 5-6 times a week; this wouldn’t be a fun walk for anyone out-of-shape.

Our day at the wall was Kelly’s last full day in China (and of the entire trip) and I think it was a really good way to round out her time in China. 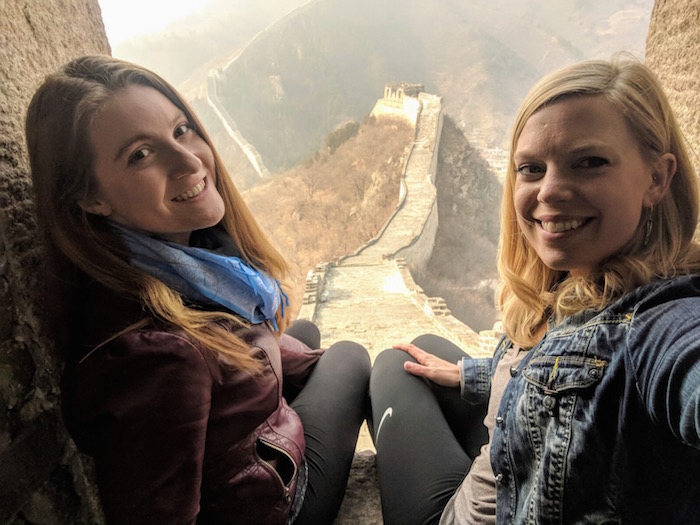 Having visitors in the places you live really forces you to scout out the gems of your city. More about the little treasures of Beijing and my parents visit the cities Xi’an and Chengdu in my next blogs.